For 16 months the opposition has been complaining that elite Sunnis have not defected. That complaint can now, officially, be put to rest if the stories of Manaf’s flight prove to be true. In March it was rumored that he had led with his father and brother, but those stories were false. 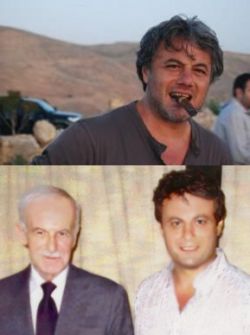 Manaf Tlass with cigar and with Hafez al-Assad

Manaf Tlass, the son of ex-Defense Minister (1972 – 12 May 2004), Mustafa Tlass, has fled the country. Mustafa Tlass was instrumental in smoothing the way for Bashar to assume power after the death of his father.

When Hafez al-Assad died in June 2000, his son Bashar was immediately promoted in military rank by Defense Minister Mustafa Tlass. He was also made secretary-general of the Baath Party whereas Manaf became a member of the Party’s Central Committee and an officer in the Republican Guard.

On Tuesday, all of Syria was buzzing that Manaf had defected but there was no confirmation. His Honda had supposedly turned up in the Rukn ad-Din neighborhood of Damascus, but he was no where to be found. Rumors of his possible defection were wide-spread on Twitter.

Syria-Steps, an on-line news source in Syria that is known for being pro-regime, has just confirmed the rumors. It claims:

Manaf Tlass’s father and brother, Firas who is a leading businessman, are believed to be out of the country. The father had gone to Paris on the pretext of getting medical attention. Firas is said to be in Dubai. It is not clear where the women and children of his family are.

Manaf Tlass was a close confidant of Bashar from his earliest days and part of his inner circle or “shille”, which included people, such as his cousins Rami and Hafiz Makhlouf, Mudar al-Assad (son of Rifaat), Nader Qala’i (ex-CEO of Syriatel and business partner to Rami) Yazan Aslan (son of Ali Aslan, Chief of Staff)

Manaf is as handsome as a movie star and carried a lot of authority. He was a true military guy and had spent his entire life in the military, unlike Bashar. People close to him say that when he walked into a room, all eyes turned to him. Not only did women find him attractive, but men did as well. He carried himself with an air of self-confidence and authority. He is smart, dashing and cunning.

The word is that Manaf had been told to solve the Harasta and Duma problems (the growing uprising on the outskirts of Damascus). He did a good job by negotiating with the opposition leaders in both suburbs, agreeing that both government forces and opposition would pull back. The Alawi leadership said “no, that is not how we are going to do this.” They pushed him aside and came down like a ton of bricks on the opposition in both neighborhoods, in an effort to assert state authority and crush the uprising through military means.

Manaf supported a policy of negotiation, flexibility and compromise. He was overruled by the military leadership and has since looked for a way out. [Continue reading…]