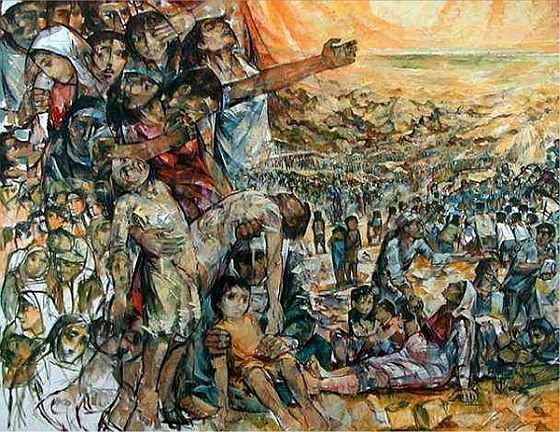 The Road to Nowhere by Ismail Shammout

Yousef Munayyer writes: Tomorrow, Air Force One will land in my hometown. Lydda, a historic Palestinian city, is where the airport is (not Tel Aviv). Just like the Palestinians, the airport was there before the state of Israel. It was only named after Israel’s first Prime Minister, David Ben Gurion, in 1973.

Unbeknownst to most observers, President Barack Obama is actually traveling to the region on the anniversary of a pivotal day in the history of Palestine. Sixty-five years ago, in a township called Lake Success, NY, a chain of events would be set into motion that would lead to disaster for Palestinians.

Lake Success, a township on Long Island, was home to the United Nations long before it moved to its iconic eastside headquarters. There, on March 19, 1948, ambassadors and delegates were gathered to discuss the implementation of the 1947 Partition plan for Palestine. The British mandate was drawing to a close within weeks. Many people know that the U.N. passed a general assembly resolution in favor of partitioning Palestine in November 1947. Few people know, however, that on this day, the United States — which had originally voted for partition — withdrew its support for the plan and favored instead something closer to a one-state outcome.

For the Zionists, this was a blow to their political scheme. They had worked on their colonial project for decades, and now after a partition plan had been announced and just as the British Mandatory forces were beginning to withdraw, the United States, the most important player on the international scene after WWII, was backing out. The Zionists were so close to establishing their goal only to see it stymied by diplomats in New York.

There was another plan, of course. It was called Plan Dalet. The military plan for the conquest of Palestine was adopted by the Zionists days earlier. Ben Gurion, in response to America’s withdrawal of support for partition, was defiant. He declared that “the tactical establishment of the Jewish state depends on Jewish strength. It is by our power, mobilized to the utmost, that the state will arise.”

If the international community wasn’t going to give the Zionists a state of their own in Palestine at the expense of the natives, the Zionists were determined to take it by force. [Continue reading…]