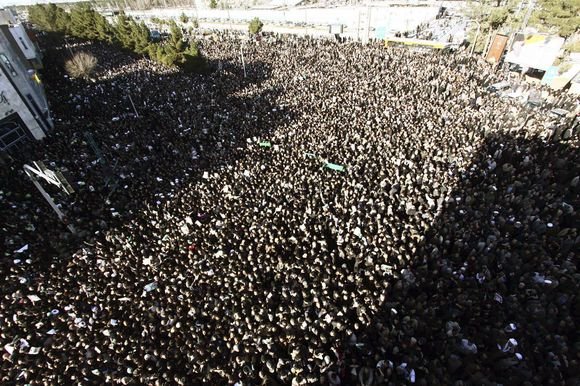 The funeral of a prominent dissident cleric in the holy Iranian city of Qum turned into a huge and furious antigovernment rally on Monday, raising the possibility that the cleric’s death could serve as a catalyst for an opposition movement that has been locked in a stalemate with the authorities.

As mourners carried the body of the cleric, Grand Ayatollah Hossein Ali Montazeri, tens of thousands of his supporters surged through the streets of Qum, chanting denunciations of the leadership in Tehran that would have been unthinkable only months ago: “Our shame, our shame, our idiot leader!” and “Dictator, this is your last message: The people of Iran are rising!” [continued…]

Karroubi: Iran’s problems should be solved by its own people
By Martin Fletcher, The Times, December 22, 2009

President Ahmadinejad has betrayed the Iranian Revolution, violated the country’s Constitution and may be unable to serve his full term, his most vocal opposition rival has told The Times.

In a surprising twist, however, Mehdi Karroubi warned the West against exploiting the regime’s weakness to strike a deal to halt a nuclear programme that was, he insisted, for peaceful purposes.

“Nuclear science and achieving peaceful nuclear technology is a right reserved for all NPT [Nuclear Proliferation Treaty] members,” he said. “We ask Western governments not to use this internal situation as a bargaining chip with the present Iranian Government to reach agreements which would undermine the rights of the Iranian people.”

He also urged the West against trying to help the opposition in its battle against the regime, saying that such efforts would “pave the way for suppression and accusations of dependency on foreigners”. He added: “The challenges in this country should be solved by its own people.” [continued…]