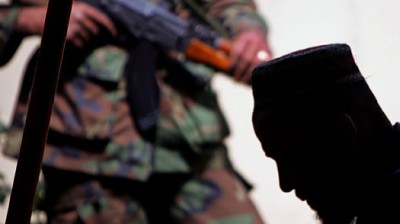 ne quiet, wintry night last year in the eastern Afghan town of Khost, a young government employee named Ismatullah simply vanished. He had last been seen in the town’s bazaar with a group of friends. Family members scoured Khost’s dust-doused streets for days. Village elders contacted Taliban commanders in the area who were wont to kidnap government workers, but they had never heard of the young man. Even the governor got involved, ordering his police to round up nettlesome criminal gangs that sometimes preyed on young bazaar-goers for ransom.

But the hunt turned up nothing. Spring and summer came and went with no sign of Ismatullah. Then one day, long after the police and village elders had abandoned their search, a courier delivered a neat, handwritten note on Red Cross stationary to the family. In it, Ismatullah informed them that he was in Bagram, an American prison more than 200 miles away. U.S. forces had picked him up while he was on his way home from the bazaar, the terse letter stated, and he didn’t know when he would be freed.

Sometime in the last few years, Pashtun villagers in Afghanistan’s rugged heartland began to lose faith in the American project. Many of them can point to the precise moment of this transformation, and it usually took place in the dead of the night, when most of the country was fast asleep. In the secretive U.S. detentions process, suspects are usually nabbed in the darkness and then sent to one of a number of detention areas on military bases, often on the slightest suspicion and without the knowledge of their families.

This process has become even more feared and hated in Afghanistan than coalition airstrikes. The night raids and detentions, little known or understood outside of these Pashtun villages, are slowly turning Afghans against the very forces they greeted as liberators just a few years ago. [continued…]