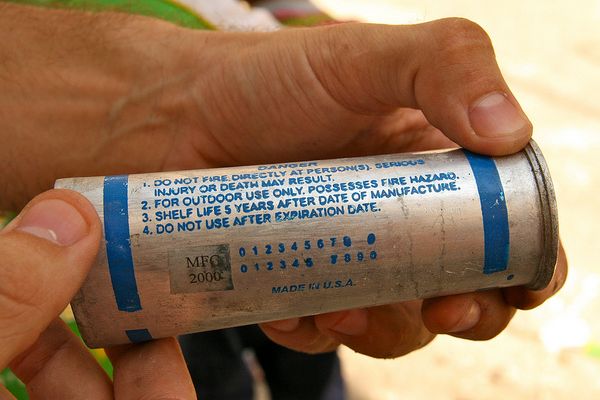 Israeli activists protesting the killing of Bil’in’s Jawaher Abu Rahmah ‘returned’ spent tear gas canisters to the residence of the American ambassador to Israel late Saturday evening. Jawaher Abu Rahmah, 36, was evacuated to the Ramallah hospital yesterday after inhaling massive amounts of tear-gas during the weekly protest in Bil’in, and died of poisoning this morning. The tear gas used by the Israeli forces in Bil’in is manufactured by Combined Systems Inc.; a United States company based in Jamestown, Pennsylvania. This is the first protest where empty tear gas canisters have been returned to an ambassador’s home.

Approximately twenty five Israeli protesters gathered in front of the residence of American ambassador to Israel, James B. Cunningham around 1am local time. The protesters ‘returned’ loads of spent tear gas canisters collected in the West Bank village of Bil’in in protest of the murder of Bil’in’s Jawaher Abu Rahmah. The demonstrators also made noise throughout the Ambassador’s neighborhood informing residents of how American military aid to Israel is being used to kill unarmed and nonviolent demonstrators in the West Bank. They chanted, “one, two, three, four stop the occupation stop the war. Five, six, seven, eight end the funding (US) end the hate.”

Five demonstrators were arrested in the action and are currently being held in detention.