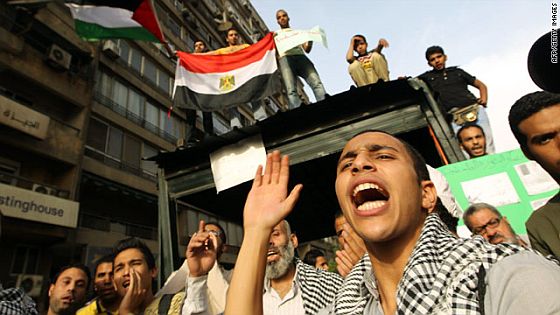 The Israeli embassy in Cairo is tucked away on the top two levels of a twenty-one-floor residential tower ten minutes from Tahrir. It is flanked by graying buildings and a usually traffic-clogged bridge. Nearby are Cairo University and the National Zoo. In the past, its busy location served it well; it was inconspicuous, and under Mubarak, the security around the building was so tight that even reaching the barricades surrounding it felt like a feat. In one of the more revealing signs of change in the New Egypt, however, it has now become the focus of the public’s attention and the site of unobstructed demonstrations.

On August 18, when Israeli forces opened fire in the direction of Egypt’s border, killing five conscripts, hundreds of angered Egyptians spontaneously marched to the embassy in protest. The Israeli shooting had been triggered by an attack on two buses heading from Bersheeba to Eilat; Israeli authorities alleged that the fleeing assailants were Palestinians who had taken advantage of the security vacuum that has emerged in Egypt since the revolution to infiltrate Israeli territory from Gaza via the Sinai. The protesters were outraged; both at the “accidental” killing of the soldiers, and at the implication that it was Egypt’s fault. The army was swift to deploy additional force to protect the already high-security embassy when the news broke, and alongside the usual concrete barricades and corrugated metal shields, there were now tanks, riot police, and rows of armed soldiers. “Give us your guns and send us to Sinai,” the protesters shouted at them. “The blood of our soldiers will not be in vain. Egyptian blood is not cheap.” The soldiers simply stood by.

With Mubarak now gone, many of his business cronies (including his close friend Hussein Salem, who orchestrated the gas deal) behind bars, and the nation in the grips of a new kind of nationalism, the question of what will become of relations with Israel has become critical. For the ruling Military Council, adhering to Camp David comes at a cost, but until it finds a better alternative—one that includes strategic training, resources, and intelligence support, as well as regional security guarantees—it is worth the price.

But for all the major contenders for Egypt’s new civilian leadership—including both secular and Islamist candidates—the status quo is as intolerable as Mubarak himself. Indeed, since the fall of Mubarak, almost every political question—from the referendum and the rules for forming parties to the new constitution—has been controversial and divisive. Yet on the Israel issue there has been a wide consensus. In front of the Israeli embassy last week, westernized, English-speaking activists stood side-by-side with Salafis, Muslim Brothers, working class Egyptians, and educated elite. As someone pointed out, this was a “mini-Tahrir.”

On August 20, even as the government was figuring out its own response to the killings, a group of political parties and presidential hopefuls met at the headquarters of the Islamist Al-Wasat party to discuss “how to handle the Israeli question.” The coalition was not only Islamist: it included Amr Moussa, Ayman Nour, Hisham Al-Bastawisi, George Ishaq, and representatives of the Al-Wafd, Al-Ghad, El-Hadara, El-Asala and El-Nahda Parties. After the meeting, the group announced that the Mubarak regime, which was a “strategic treasure” to Israel, is gone forever. “It has been replaced by a strong nation that doesn’t know weakness and knows how to get justice for the blood of its martyrs. In the face of this crime, the Egyptians have united across ideologies, political parties, police and army and put aside their differences for the sake of the nation.” The coalition announced a list of eight demands to be handed to SCAF. They include banning Israeli naval forces from passing through the Suez Canal, raising Egyptian armed forces presence in Sinai, and reconsidering the gas deal.

Government sources have since told me that SCAF and the interim cabinet are being “forced to seriously consider” public demands to reset its Israel policies and that “discussions are taking place.” Troop allowances in the Sinai are likely to be where the interim government presses for change, as well as re-examining the controversial gas deal. “What the Egyptian public wants is important, but many of the demands are too drastic—they would escalate a situation in ways nobody would want,” Major-General Badin told me by phone last week.

The Israeli embassy sit-in was suspended on August 27, one day after a “million man march” in which 8,000-odd protesters demonstrated in Cairo, Alexandria, and governorates across Egypt. Although the Israeli ambassador was not asked to leave and the Egyptian envoy to Israeli was not recalled, the protesters could claim a few successes. The Israelis had issued several statements of apology and regret, a joint investigation had reportedly begun, more Egyptian troops would be allowed into the Sinai’s Zone C (an area on the eastern border of Sinai where only limited and light-armed Egyptian police presence is allowed according to Camp David).

Perhaps most significantly (and despite general Badin’s insistence that it wouldn’t) the flag over the Israeli embassy had in fact been removed: a young Egyptian, Ahmad El-Shahat scaled the 21-story building and brought it down on the night of August 21, replacing it with an Egyptian one. The “Flagman,” as he came to be known, instantly became a national hero. Hamdeen Sabahi, the presidential hopeful and head of the Karama party, sent “a salute of pride to Ahmad El-Shahat, the public hero who burned the Zionist flag that spoiled the Egyptian air for 30 years.” The governor of Sharqiya, just east of Cairo, honored Shahat with an apartment and job. Across the Arab world too, he was hailed. For seven days, the army left the Egyptian flag on the building, but foreign ministry officials were quick to tell me that “it won’t last. The army is letting the protesters vent steam. Give it a week, the [Israeli] flag will be up again.”

On August 29, at 2:37 PM, it happened. A middle-aged man stuck his head out of the window of the Israeli embassy building’s twentieth floor, scanned the streets and bridge and horizon for possible protesters, and when the coast seemed clear replaced the by-then tattered Egyptian flag with a crisp new Israeli one. A security guard at a building next door who witnessed it said it took about seven minutes. It took about half that time for the news to spread. On Twitter and Facebook, Egyptians quickly started calling for El-Shahat to return to the embassy. “Get that damn flag down,” someone tweeted.