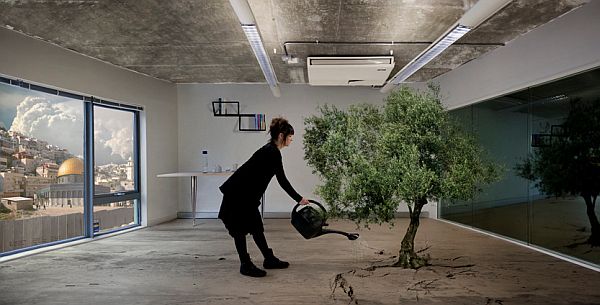 But after Sansour’s “sci-fi photo series” Nation Estate became one of the finalists for the Lacoste Elysée Prize 2011 — a prestigious award that carries a payment of over $30,000 — the contest’s sponsor, Lacoste, insisted that her work be disqualified. (Yes, the company that makes those funny alligator shirts.) Sansour’s name was removed from the prize’s website, and the photos were removed from an upcoming issue of the magazine ArtReview.

The Nation Estate Project imagines the entire Palestinian people living in one giant high-rise building, sort of like a J.G. Ballard novel, with each floor representing a different city. It’s an offshoot of one of her science fictional short films. Sansour told the Daily Star:

I think the most shocking thing about this development, is that I didn’t apply for this prize… They nominated [me] only to revoke my nomination later on grounds that my work is ‘too pro-Palestinian.’

The Swiss gallery hosting the prize later issued a statement [PDF] explaining its decision to suspend the contest and disassociate itself from Lacoste’s choice:

The Musée de l’Elysée has based its decision on the private partner’s wish to exclude Larissa Sansour, one of the prize nominees. We reaffirm our support to Larissa Sansour for the artistic quality of her work and her dedication. The Musée de l’Elysée has already proposed to her to present at the museum the series of photographs “Nation Estate”, which she submitted in the framework of the contest.

3 thoughts on “Why did Lacoste try to suppress a Palestinian artist’s science fictional art project?”