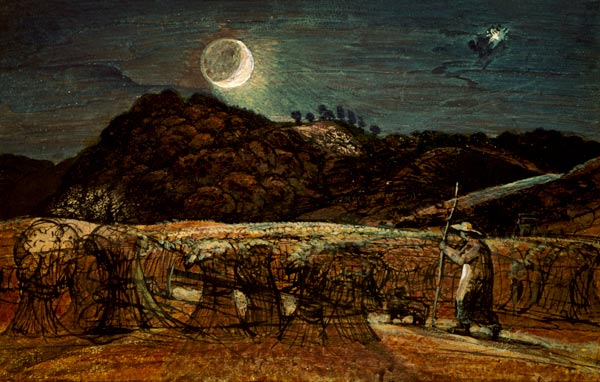 George Monbiot writes: The land around Helpston, just to the north of Peterborough in Northamptonshire, now ranks among the most dismal and regularised tracts of countryside in Europe. But when the poet John Clare was born this coming Friday in 1793, it swarmed with life. Clare describes species whose presence there is almost unimaginable today. Corncrakes hid among the crops, ravens nested in a giant oak, nightjars circled the heath, the meadows sparkled with glow worms. Wrynecks still bred in old woodpecker holes. In the woods and brakes the last wildcats clung on.

The land was densely peopled. While life was hard and spare, it was also, he records, joyful and thrilling. The meadows resounded with children pranking and frolicking and gathering cowslips for their May Day games; the woods were alive with catcalls and laughter; around the shepherds’ fires, people sang ballads and told tales. We rightly remark on the poverty and injustice of rural labour at that time; we also forget its wealth of fellowship.

All this Clare notes in tremulous bewitching detail, in the dialect of his own people. His father was a casual farm labourer, his family never more than a few days’ wages from the poorhouse. Clare himself, from early childhood, scraped a living in the fields. He was schooled capriciously, and only until the age of 12, but from his first bare contact fell wildly in love with the written word. His early poems are remarkable not only for the way in which everything he sees flares into life, but also for his ability to pour his mingled thoughts and observations on to the page as they occur, allowing you, as perhaps no other poet has done, to watch the world from inside his head. Read The Nightingale’s Nest, one of the finest poems in the English language, and you will see what I mean.

And then he sees it fall apart. Between 1809 and 1820, acts of enclosure granted the local landowners permission to fence the fields, the heaths and woods, excluding the people who had worked and played in them. Almost everything Clare loved was torn away. The ancient trees were felled, the scrub and furze were cleared, the rivers were canalised, the marshes drained, the natural curves of the land straightened and squared. Farming became more profitable, but many of the people of Helpston – especially those who depended on the commons for their survival – were deprived of their living. The places in which the people held their ceremonies and celebrated the passing of the seasons were fenced off. The community, like the land, was parcelled up, rationalised, atomised. I have watched the same process breaking up the Maasai of east Africa.

Clare documents both the destruction of place and people and the gradual collapse of his own state of mind. “Inclosure came and trampled on the grave / Of labour’s rights and left the poor a slave … And birds and trees and flowers without a name / All sighed when lawless law’s enclosure came.”

As Jonathan Bate records in his magnificent biography, there were several possible causes of the “madness” that had Clare removed to an asylum in 1837: bipolar disorder, a blow to the head, malaria (then a common complaint on the edge of the fens). But it seems to me that a contributing factor must have been the loss of almost all he knew and loved. His work is a remarkable document of life before and after social and environmental collapse, and the anomie that resulted.

What Clare suffered was the fate of indigenous peoples torn from their land and belonging everywhere. His identity crisis, descent into mental agony and alcohol abuse, are familiar blights in reservations and outback shanties the world over. His loss was surely enough to drive almost anyone mad; our loss surely enough to drive us all a little mad. [Continue reading…]