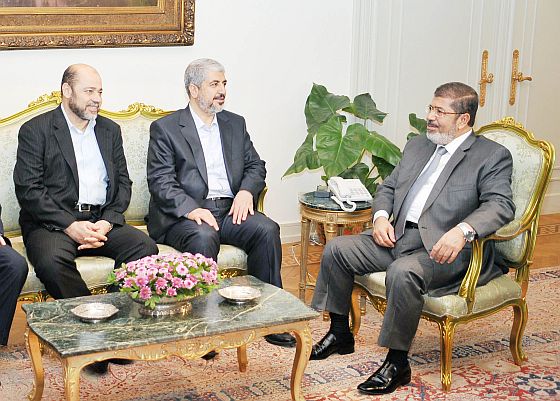 In July, Khaled Meshaal, the leader of Hamas, met Egypt's newly elected President Mohamed Morsy and hailed Morsy's election as the start of a "new era" for Egypt and the Palestinians.

Tony Karon writes: When a civilian bus was bombed in Tel Aviv on Wednesday, many feared the incident would derail negotiations for a truce in the latest conflict between Israel and Hamas. That proved not to be the case. The other anxiety was that an Egypt where the Muslim Brotherhood is in power would somehow jinx the prospects for peace. That fear proved to be groundless too. Indeed, the government of President Mohamed Morsy took the lead role in brokering the Gaza truce announced in Cairo Wednesday night, and will reportedly act as its guarantor. “It was unknown how Egypt would react,” Likud party legislator Yohanan Plesner told Britain’s Telegraph. “When the moment of truth came, the Egyptian leadership moved responsibly and clearly said they were trying to restore stability.” Not only that, says analyst Michael Wahid Hanna at the Century Foundation, “Egypt’s government has put its own international credibility on the line by effectively undertaking to ensure that Hamas observes the terms of its ceasefire — that’s a subtle but profoundly important change.”

Egypt’s Gaza role reflects the emerging contours of a Middle East profoundly changed by the Arab Spring, yet forced to confront decades-old challenges. The essential partnership in tamping down the Gaza violence, notes former U.S. Ambassador to Israel Martin Indyk, is the one “between the United States and Egypt — one using its influence with Israel, the other with Hamas — to put together a ceasefire package as the foundation for a wider resolution of the conflict.” Although Secretary of State Hillary Clinton may have played an important part in finessing the deal, Morsy and the Egyptians provide a service Washington cannot in dealing with Gaza. The U.S. is officially sworn to avoid engagement with Hamas — a movement it defines as a terrorist organization. And while Washington has a preferred Palestinian interlocutor–President Mahmoud Abbas who is based in the West Bank–Abbas has no influence over events in Gaza, where his rivals in Hamas hold sway. And so, the Obama Administration turned to Egypt, urging it to use the Muslim Brotherhood’s political ties with Hamas and the Egyptian intelligence service’s long-established relationship with its Israeli counterparts to broker a truce.

Unlike former President Hosni Mubarak who deemed Hamas an enemy, the Muslim Brotherhood government sees the movement as its own political progeny, and is therefore not shackled by a need to prevent Hamas making political gains from a truce. On the contrary, while Egypt seeks a cease-fire that ends Palestinian rocket fire from Gaza and Israeli air strikes on the territory, Cairo’s mediation also offers Hamas a pathway out of the blockade that has choked off Gaza’s economy for the past five years. Even Israeli leaders have praised the response from Cairo, notwithstanding Egypt’s unprecedented public acts of solidarity with Hamas.

Morsy had made clear, when he addressed the U.N. General Assembly in September, that his government would both abide by the 1978 Camp David peace treaty with Israel but also challenge the status quo in the Palestinian territories. “I say it loudly to those wondering about our position vis-a-vis the international agreements and conventions that we have previously adhered to: we are committed to what we have signed on,” Morsy said at the time. “We also support the inalienable rights of the Palestinian people and are determined to pursue all efforts side by side with them until they regain their rights.” [Continue reading…]