How many American senators have the courage and integrity required to say this? At least one, but not many others. That one was the senator being quoted: Chuck Hagel.

Americans who put Israel first don’t like the ring of Hagel’s words, both because it suggests he might lack sufficient loyalty to Israel and also because that kind of statement shines a light on their own lack of loyalty to the U.S..

Still, aside from those who place their primary allegiance to the Jewish state, it’s hard for others to find much fault in Hagel’s position as described by Aaron David Miller in The Much Too Promised Land (2008):

[P]olitical pressures have taken a serious toll by conditioning a key branch of the American government to be reflexively pro-Israel at a time when serious questions need to be asked and debated about Middle East policy. Congress has little stomach to serve as a forum for this dialogue and debate, let alone to play a role in seriously pressing an administration to pursue Arab-Israeli diplomacy. Some members in both the Senate and the House are willing to be critical of Israel or of AIPAC or to take positions that appear sensitive to Arab or Palestinian concerns, but certainly not many. 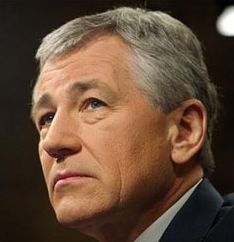 One who is willing is Chuck Hagel, the two-term Republican senator from Nebraska. Of all my conversations, the one with Hagel stands apart for its honesty and clarity. If I wanted to be in a safe business, he began, “I’d sell shoes.” Hagel’s logic chain is pretty compelling. America is Israel’s best friend, but it also has key interests in the Arab and Muslim world that, particularly since 9/11, it must try to protect. Being too one-sided when it comes to the Arab-Israeli isn’t good either for Israel or for America. And far too often Congress shrinks from making this clear.

“This is an institution that does not inherently bring out a great deal of courage,” Hagel continues. Most of the time members play it safe and adopt an “I’ll support Israel” attitude. AIPAC comes knocking with a pro-Israel letter, and “then you’ll get eighty or ninety senators on it. I don’t think I’ve ever signed one of those letters. When someone would accuse him of not being pro-Israel because he didn’t sign the letter, Hagel told me he responds: “I didn’t sign the letter because it was a stupid letter.”

Few legislators talk this way on the Hill. Hagel is a strong supporter of Israel and a believer in shared values. “The Jewish lobby intimidates a lot of people up here,” but as he put it, “I’m a United States senator. I’m not an Israeli senator.”

3 thoughts on “‘I’m a United States Senator. I’m not an Israeli senator’”