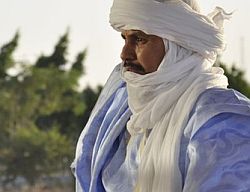 The Associated Press reports: Mali’s rebel movement showed new signs of discord on Thursday in the wake of punishing French air strikes, with one wing of the Ansar Dine group now pledging to negotiate an end to the country’s crisis and possibly even fight against its former comrades-in-arms.

France’s air and land campaign that began two weeks ago to save Mali’s embattled interim government has shaken up the military landscape and put the international spotlight on the former French colony. Mali’s government was on a new political defensive, urging its soldiers to respect human rights after new allegations that they had carried out summary executions in zones of battle against the radical Islamists.

Three al-Qaida-linked extremist groups have controlled Mali’s vast northeast for months, capitalizing on chaos that followed a coup d’etat in Mali’s capital, Bamako, in March. But in a new sign of splintering, former Ansar Dine leader Alghabass Ag Intalla told the Associated Press on Thursday that he and his men were breaking off from Ansar Dine “so that we can be in control of our own fate.”

“We are neither AQIM or MUJAO,” he said of the other groups, al-Qaida in the Islamic Maghreb and the Movement for the Unity and Jihad in West Africa, known by its French-language acronym. “We are a group of people from the north of Mali who have a set of grievances that date back at least 50 years.”

The comments suggested that at least some of Islamist fighters are searching for an exit in the wake of the French airstrikes. French radio RFI reported earlier Thursday that Intalla’s new group will be called the Islamic Movement for the Azawad, a Tuareg term for northern Mali, and his men are willing to fight their former comrades-in-arms in Ansar Dine.

“We are not terrorists. We are ready to negotiate,” Intalla told the AP. [Continue reading…]