The box on the Euphrates
By Paul Woodward, War in Context, October 29, 2007

Writing in The American Conservative, former CIA officer Philip Giraldi sees in the Syrian-nuclear-reactor story the hallmarks of a disinformation campaign:

In the intelligence community, a disinformation operation is a calculated attempt to convince an audience that falsehoods about an adversary are true, either to discredit him or, in an extreme case, to justify military action. When such a campaign is properly conducted, information is leaked to numerous outlets over a period of time, creating the impression of a media consensus that the story is true, as each new report validates earlier ones.
[…]
The [news] pieces [on the target of the Israeli air attack in Syria] have a common thread: they rely entirely on information provided by Israeli sources without independent corroboration. And the ongoing play they are getting in the international media, without much critical commentary and without direct attribution to Israel, mark them as classic disinformation.

As nuclear proliferation expert Jeffery Lewis notes, the latest revelation — that the “box-on-the-Euphrates” is at least four years old, its existence having already been noted by the intelligence community (IC) — provides a compelling explanation why national security adviser Stephen J. Hadley has kept such a tight lid on the dissemination of the “new” intelligence: “we’d already looked at the building and Hadley knew what the IC would say.”

In the absence of further hard evidence, the ensuing commentary and analysis, most of which is extremely sketchy, has nevertheless become conventional wisdom in part because a few usually reliable sources have given the narrative a veneer of credibility:

— Respected former IAEA inspector, David Albright, has lent support to the idea that the box resembles the North Korean Yongbyon reactor based on not a lot more than the fact that the two buildings share the same diameter footprint. But whereas Yongbyon comprises a larger box with smaller boxes stacked on top of it, the image of the Syrian cube has been helpfully marked up with locations for imaginary boxes. “There also appears to be a faint square on top of the Syrian building’s roof. It is unclear whether something would be built there, but its dimensions, 24 meters by 22 meters, are consistent with the subsequent construction of an upper roof.” Four years after this faint square was first photographed, it remained a faint square [PDF]. 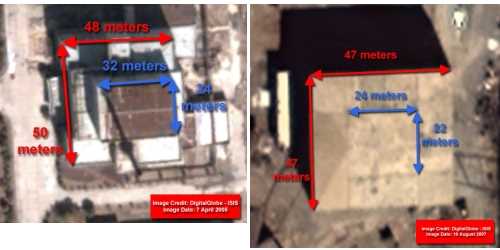 — Global Security‘s John Pike refers to the site as being located in “the middle of nowhere” — everyone has now seen images of the barren location — yet one only needs to spend a few minutes on Google Earth to discover that the Box on the Euphrates lies right in the middle of Syria’s agricultural heartland with sizable communities either direction from this supposedly isolated location.

This makes it all the more strange that nothing in the images appear to indicate the existence of a secure perimeter to this facilitiy — something that can easily be discerned if one looks at similar resolution images of, for instance, Israel’s nuclear facility at Dimona. However laid-back the Syrians might be, I’d wager that come the day that there was anything of high value at this site, there would be some serious security to keep out unwelcome intruders.

— Washington’s high priest of gossip, Chris Nelson, after originally being convinced that the facility was related to Scud missile assembly, has now been won over to the nuclear reactor theory. The “evidence” that shifted his opinion? The fact that US-North Korea negotiator Chris Hill, in his recent Congressional testimony, did not refuted the theory. The absence of a denial is the same as an affirmation? Not according to my understanding of logic.

So what do we really know at this point?

A large cube-shaped building next to the Euphrates was visible from space in 2003. Given its size it must have taken a while to construct. The primary structure looked pretty much the same from above in August 2007. New images reveal that it’s not there now, the site has been leveled and it is reasonable to assume that the site clearing occured after, and very likely as a result of, an Israeli air force attack on September 6, 2007.

Do we have hard evidence that Syria was engaged in constructing a nuclear reactor? Not yet. Are any journalists hunting down that hard evidence? Probably not — why go to the trouble when you can kick back and get paid for schmoozing with John Bolton.

Meanwhile, IAEA director Mohamed ElBaradei is pissed off about the “bomb first and then ask questions later” approach. “I think it undermines the system and it doesn’t lead to any solution to any suspicion, because we are the eyes and ears of the international community. It’s only the agencies and inspectors who can go and verify the information.” He notes that in all the years that John Bolton and his cohorts have been making accusations about a Syrian nuclear program, “we have not received information about any nuclear-related activities, clandestine nuclear-related activities in Syria.”

Perhaps then we can infer that the real target of the Israeli strike was not a nuclear facility: it was the IAEA inspections process — a troublesome log that the neocons are eager to clear off the road leading to Tehran.