Negroponte goes to schmooze with the indispensable General
By Paul Woodward, War in Context, November 13, 2007 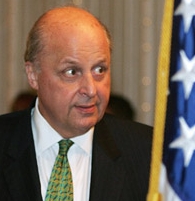 So, Deputy Secretary of State, John Negroponte, is rushing off to Islamabad (via Africa). Having last week told Congress that the Bush administration regards General Musharraf as “indispensable,” Negroponte is now going to say what?

Several times today the New York Times has insisted on referring to Negroponte as an “envoy” even though at the White House press gaggle this morning, press secretary Dana Perino made it clear that the administration wants to dampen expectations that anything of consequence may follow from the Negroponte-Musharraf tête-à-tête:

MS. PERINO: I think that description was a little bit too strong in terms of “envoy.” Deputy Secretary Negroponte will be traveling there later in the week. I believe that’s who they were referring to [as an “envoy”].

Q But why is “envoy” too strong?

Later in the day, State Department spokesman Tom Casey was at pains to “deal with some of the other stories that were out there today that seemed to talk about some kind of special envoy or talk of him as a special envoy to Pakistan.” He was eager to impress upon those most obstinate members of the press who were still referring to him as an envoy that Negroponte is not an envoy.

Here’s where he cut to the chase after being asked whether Deputy Secretary Negroponte would be taking any special letter or any kind of message from Secretary Rice or President Bush other than to repeat what has already been said. “No, I think you’ll expect him to, again, deliver the same kind of message that we’ve already talked about publicly before. I’m not aware,” Casey said, “of him carrying any kind of special proposals or letters or things like that.”

So there we have it. Negroponte is not an envoy because he doesn’t have anything to say that hasn’t already been said before.

Will he have any time for sightseeing? Pick up any souvenirs? Maybe join in one of those festive get-togethers that all the lawyers are having.

I do have one suggestion though: He might want to consider compressing his Africa schedule by a few days. Otherwise, by the time he shows up in Islamabad, the General might be too busy to have the Deputy Secretary of State over for tea and scones.

His bridges burned, Musharraf has nowhere to turn
By Mark Tran, The Guardian, November 13, 2007

With pressure mounting on him at home and from abroad, the chances that General Pervez Musharraf will survive politically are looking increasingly bleak.

The prospects of a power-sharing deal with the opposition leader Benazir Bhutto that would have enabled Musharraf to cling on to power as president are diminishing rapidly. The more pressure Musharraf is applying on Bhutto, the more she is pushing back.

Today, as she was put under house arrest for the second time in five days, the opposition leader moved closer to a clean break with Musharraf.

For the first time, Bhutto called on him to resign as president altogether, adding for good measure that she could never serve in a government under him. Anyone associated with the general, she said, “gets contaminated”. [complete article]

Musharraf’s miscalculations were abetted by the United States, which until recently all but ignored the political aspects of counterinsurgency in Pashtun territory. The Bush Administration, distracted by the war in Iraq, and conditioned by its long dependence on Pakistan’s Army, outsourced its Pakistan policy to Musharraf and bankrolled his narrow, increasingly self-defeating strategies. Of the approximately ten billion dollars in overt funds delivered to Pakistan since September 11th, for example, less than a hundred million has gone toward education, an issue about which Musharraf has spoken often but done very little.

The Pakistani Army’s intermittent attempts to suppress the Pashtun Islamists have failed, and these reversals have recently produced stresses within the military not witnessed since the country broke in half, in 1971: the humiliating surrender and capture of hundreds of Pakistani soldiers and local Pashtun paramilitaries, which have led to prisoner exchanges with the Taliban; reports of desertion and mutiny; and a succession of demoralizing battlefield defeats. About fifteen per cent of Pakistan’s Army officers are Pashtun, and the danger of revolt or division among them is deepening. [complete article]