A curious event took place in the Gulf as the new National Intelligence Estimate appeared in Washington, undermining the Bush administration’s threats and angry rhetoric by revealing that Iran had suspended in nuclear weapons program back in 2003. 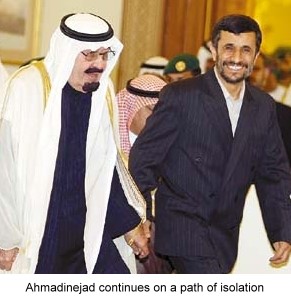 The arch-demon of President Bush’s rhetoric, Iran’s President Mahmoud Ahmedinejad, was sitting politely in a conference room with the Arab leaders of the Gulf Cooperation Council. He was all sweetness and light and neighborly good manners, offering a regional security pact and a 12-point cooperation plan, including free trade and joint investments in oil and gas.

Ahmedinejad was so courteous that the GCC leaders hailed his “gestures of goodwill.” Qatar’s Prime Minister Skeikh Hamad al Thani, whose emirate hosted the summit, said, “If Iran was serious in its positive intentions, we can develop our relations for the sake of regional stability.” [complete article]

There are good foundations for cooperative and friendly relations between the Gulf state and Iran; there are also good reasons to justify the conflicts and caution between the two sides of the Arab Gulf. The region is passing through a gray phase in which interests and goals are too intertwined. The only way to put friendship and cooperation ahead of conflict and caution is by direct dialogue. [complete article]

Leaders of the six-member Gulf Cooperation Council (GCC) yesterday announced their plan to launch a common market in January 2008 and a currency union by 2010 in addition to maintaining their currencies’ peg to the US dollar. [complete article]

See also, As Dubai heats up, is Israel frozen out? (The Forward).

Editor’s Comment — While some headlines in the US press are still pushing the old narrative (such as the LA Times’ “Report on Iran fuels Arab fears“), the image across the Middle East is somewhat different. Mahmoud Ahmadinejad might not be universally popular, but President Bush is deluding himself if he thinks that Iran can now be isolated. Neither should the significance of Ahmadinejad’s overtures to the GCC be underestimated. The GCC (an acronym that will be unfamiliar to most Americans) might be made up of mostly small and autocratic states but this bloc also happens to be a financial superpower possessing more than double the available investment funds of China.