Into the valley of death
By Sebastian Junger, Vanity Fair, January, 2008

By many measures, Afghanistan is falling apart. The Afghan opium crop has flourished in the past two years and now represents 93 percent of the world’s supply, with an estimated street value of $38 billion in 2006. That money helps bankroll an insurgency that is now operating virtually within sight of the capital, Kabul. Suicide bombings have risen eightfold in the past two years, including several devastating attacks in Kabul, and as of October, coalition casualties had surpassed those of any previous year. The situation has gotten so bad, in fact, that ethnic and political factions in the northern part of the country have started stockpiling arms in preparation for when the international community decides to pull out. Afghans—who have seen two foreign powers on their soil in 20 years—are well aware of the limits of empire. They are well aware that everything has an end point, and that in their country end points are bloodier than most.

The Korengal is widely considered to be the most dangerous valley in northeastern Afghanistan, and Second Platoon is considered the tip of the spear for the American forces there. Nearly one-fifth of all combat in Afghanistan occurs in this valley, and nearly three-quarters of all the bombs dropped by nato forces in Afghanistan are dropped in the surrounding area. The fighting is on foot and it is deadly, and the zone of American control moves hilltop by hilltop, ridge by ridge, a hundred yards at a time. There is literally no safe place in the Korengal Valley. Men have been shot while asleep in their barracks tents. 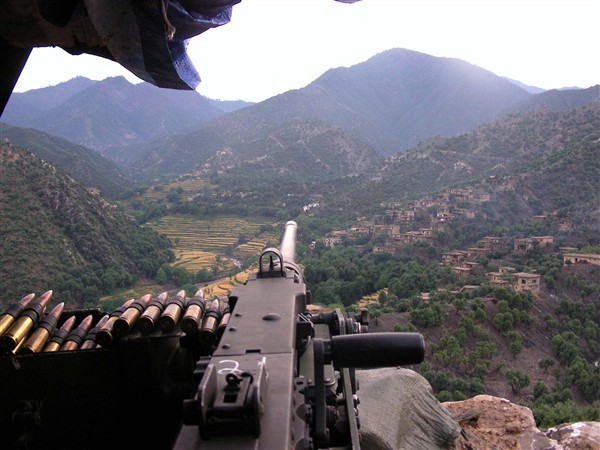 The sun pries itself over the eastern ridges and half the platoon gets to work filling hescos while the other half mans the heavy weapons. The men work around the outpost in teams of three or four, one man hacking at the rock shelf with a pickax while another shovels the loose dirt into sandbags and a third drops the biggest chunks into an ammo can, then walks over to a half-full hesco, muscles the can over his head, and dumps the contents in.

“Prison labor is basically what I call it,” says a man I know only as Dave. Dave is a counter-insurgency specialist who spends his time at remote outposts, advising and trying to learn. He wears his hair longer than most soldiers, a blond tangle that after two weeks at Restrepo seems impressively styled with dirt. I ask him why the Korengal is so important.

“It’s important because of accessibility to Pakistan,” he says. “Ultimately, everything is going to Kabul. The Korengal is keeping the Pech River Valley safe, the Pech is keeping Kunar Province stable, and hence what we are hoping is all that takes the pressure off Kabul.”

While we are talking, some rounds come in, snapping over our heads and continuing on up the valley. They were aimed at a soldier who had exposed himself above a hesco. He drops back down, but otherwise, the men hardly seem to notice.

“The enemy doesn’t have to be good,” Dave adds. “They just have to be lucky from time to time.”

The Korengal is so desperately fought over because it is the first leg of a former mujahideen smuggling route that was used to bring in men and weapons from Pakistan during the 1980s. From the Korengal, the mujahideen were able to push west along the high ridges of the Hindu Kush to attack Soviet positions as far away as Kabul. It was called the Nuristan-Kunar corridor, and American military planners fear that al-Qaeda is trying to revive it. If the Americans simply seal off the valley and go around, Taliban and al-Qaeda fighters currently hiding near the Pakistani towns of Dir and Chitral could use the Korengal as a base of operations to strike deep into eastern Afghanistan. Osama bin Laden is rumored to be in the Chitral area, as are his second in command, Ayman Al-Zawahiri, and a clutch of other foreign fighters. While thousands of poorly trained Taliban recruits martyr themselves in southern Afghanistan, bin Laden’s most highly trained fighters ready themselves for the next war, which will happen in the East.

In my time in the Korengal, only one soldier told me that he joined the army because of September 11. The rest are here because they were curious or bored or because their fathers had been in the army or because the courts had given them the choice of combat or jail. No one I talked to seemed to have regretted the choice. “I joined the infantry to get out of people work and shit,” one soldier told me. “My main thing was partying. What was I going to do, keep partying and living with my mom?” [complete article]