If the Pakistani government is not engaged in a cover-up, they’re certainly doing a good job of making it look like a cover-up. First the crime scene was immediately hosed down removing any evidence. Then, after Benazir Bhutto had been pronounced dead, there was no autopsy. Then, after it had been widely reported that she had died from gun shot wounds, the Pakistan Interior Ministry claimed that she had not been shot — that she had died from a fractured skull resulting from her head hitting a lever.

But now Sherry Rehman, a close aide to Bhutto who bathed her body after her assassination, says, “There was a bullet wound I saw that went in from the back of her head and came out the other side.” And following the verbal testimony now we have the visible evidence: the image of a young man aiming a pistol at Bhutto moments before she died. 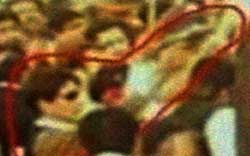 Interior Ministry spokesman Javed Iqbal Cheema, says, “This is not an ordinary criminal matter in which we require assistance of the international community. I think we are capable of handling it.” And the White House demurely says, “If Pakistani authorities ask for assistance we would review the request.” In Washington and Islamabad there seems to be much more interest in chanting the al Qaeda mantra than in finding out who was really behind the assassination.