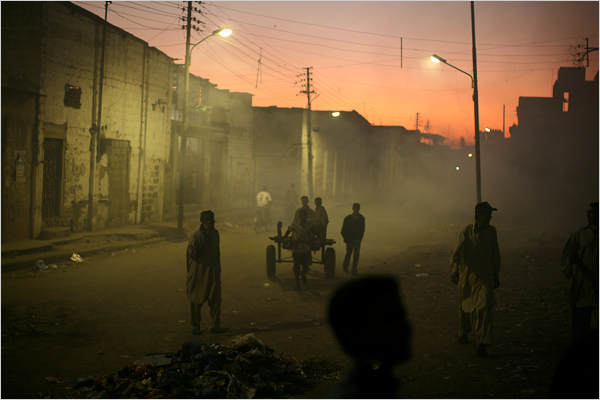 The highway that leads from Benazir Bhutto’s ancestral village to this, her hometown, is one long road of ruin. Here and there along a stretch of 200 miles lie twisted hulks of tractor-trailers, their contents spilling out on the highway, casualties of the riots that broke out after Ms. Bhutto’s assassination last Thursday.

On New Year’s Eve, as the last light of 2007 fell from the sky, piles of coal still smoldered on the pavement. Rotten oranges littered the road. A consignment of pickup trucks that the United States had bought for Pakistani law enforcement officials fighting militants had been picked clean; brakes, steering wheels, batteries had been carted away.

The truck drivers, most of them ethnic Pashtuns from the faraway tribal areas of the northwest, waited in vain for rescue here in the southern ethnic Sindhi heartland. One of them had his left ear caked with blood; the mobs had pelted him with stones and then burned his coal truck, costing him his only source of income.

The road was a perfect emblem of the mood of this country, as it ushered in a new year under a thick shroud woven of rage and uncertainty. [complete article]

Pakistan’s election commission announced Wednesday that parliamentary elections would be postponed until Feb. 18, a delay of six weeks, after the death of the opposition leader Benazir Bhutto and the riots that have damaged some election commission offices and paralyzed parts of Sindh Province. [complete article]