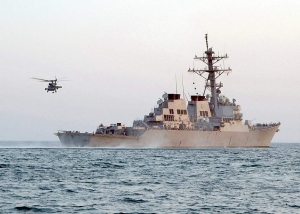 One Defense Department official, who spoke on the condition of anonymity to describe early reports from the Navy’s regional headquarters in Bahrain, said that the Iranian boats made a radio threat that the American ships would explode.

“The five Iranian fast boats essentially came in and charged the ships,” the Defense Department official said. The verbal warnings heard in English over the internationally recognized bridge-to-bridge radio channel said, “I am coming at you, and you will explode in a few minutes,” the official said.

A few minutes later, one of the Iranian boats placed two white boxes, possibly meant to be taken for mines, in the wake of one of the Navy ships, which caused another of the American vessels to take evasive action.

“Whether they’re just testing us to learn about our procedures, or actually trying to initiate an incident, we don’t know,” the official said.

“We have found in the past that the regular Iranian Navy was a courteous and professional organization, and our relations are as we would have with any other navy in the world,” said one Pentagon official who has studied the issue. “The I.R.G.C. Navy has a tendency to act in these unprofessional ways, and to be very provocative at times.”

There’s a fair bit of speculation on Iranian motives today, from Blake Hounsell wondering if the IRGC commanders are doing some oil-market speculating to talk of a “Gulf of Tonkin” exersize and the inevitable Rightwing calls to bomb, bomb, bomb Iran. Others see this incident as being connected to the US nomination races (no, really – everything is about the races for some folk) or to Bush’s Mid-East visit.

While the latter is the most likely if this event – not unusual except for one Iranian redneck on a radio – was deliberately singled out for orders to that effect by some senior commander, I’m going with Dave Schuler’s take – dumb hotdogs playing brinkmanship games.

I think it’s more likely that it’s just a bunch of IRG’s horsing around, taunting the Great Satan. You can’t peddle that sort of stuff for a generation or more without it having some effects.

On both sides, Dave. [complete article]

Tehran in recent days reshuffled its diplomatic team in key Middle East posts. It has cut short the tenure of its ambassador to Syria after just a two-year stint, replacing him with another hard-core loyalist of President Mahmoud Ahmadinejad. The Tehran government has also announced the departure of its point man on Iraq to a post in far-flung Japan.

The moves have sparked speculation that Ahmadinejad wants more control over the country’s foreign policy on Iraq and Lebanon.

But they could also just be complicated maneuvers to consolidate power within the ruling elite’s treacherous factional politics. [complete article]

Oil fell more than $1 to below $97 a barrel on Monday, handing back gains triggered by reports of fresh tensions between Iran and the United States. [complete article]