It’s not about me; it’s about you. 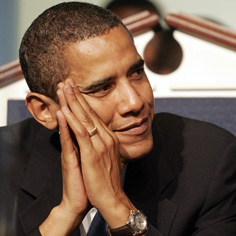 That’s a hard idea for the worldly-wise commentator to swallow because it sounds too glib. Even so, it is a message that resonates with Obama’s audience because he possesses that rarest of political commodities: authenticity.

To the cynical eye, Obama embodies the superficiality of American presidential politics. He is seen as the kind of candidate that Hollywood would dream up if concocting a modern-day JFK: good-looking; brimming with confidence and charisma; multicultural; a black man who sounds like a white man — the perfect star for an all-American blockbuster. As an icon, he makes the perfect contrast to Mitt Romney who, as Michael Kinsley wrote the other day, “radiates conventionality, with his ‘Leave-It-to-Beaver’-and-then-some family and his good looks straight out of ‘Mad Men,’ the TV series about Madison Avenue in the early 1960s.”

To the outside world, Obama represents a passionate yearning for America to redeem itself — for an end to the nightmare of the Bush era; for reconciliation and forgiveness; for the hope that the United States will once again resume an honored place within the community of nations.

To his supporters and an increasing number of other Americans, Obama has captured the hope that he can reclaim the possibility of government of the people, by the people, for the people.

In the world of a televised presidential contest, the primaries bear a disquieting resemblance to so many other TV games of elimination. Who’s going to get the prize? Who’s going to get bumped off the stage? Who scored points and who took the hard hits? As a game contestant, Obama’s performance has been mixed — but this isn’t why he’s winning.

He’s winning because whereas his opponents appear to be promoting themselves, he conveys a compelling sense that he’s rooting for America. This is quintessential populism but the unique distinction that Obama lends this is that his appeal to the collective is credible.

September 11 brought Americans together, but this was a unity forged through fear. It was the solidarity that comes from facing a common enemy. It was not and could never be sustainable. It was from its inception, ripe for abuse.

The unity that Obama has tapped into and is eager to cultivate comes from recognizing a common purpose and collective interests. It’s not about for-us-or-against-us; it’s about us.

While American democracy might be cursed by a poorly informed electorate — especially in the arena of international affairs — America’s voters are not lacking in the canniness that judges character and ultimately makes democracy work.

For many months, Hillary Clinton’s popularity was sustained as much by the expectation that her nomination was a foregone conclusion, as it was by her political acumen. But as soon as Obama upturned the equation, the zeitgeist shifted.

The prosaic questions facing the voters used to be, which among these candidates is capable of winning the election, of guiding the country in the right direction, and “appears presidential”?

The question then became, is it possible that the United States could have a president who actually places the country and not him or herself at the center of their vision of leadership?

Clinton said of herself when interviewed on CNN today, “I am so other-oriented,” yet as sincere as she might be in making that claim, she is running a campaign in which she places herself squarely at the center. In contrast, Obama puts the country first, yet if this was merely for rhetorical effect, it could as easily be imitated — just as the campaign theme of “change” has of late been universally adopted. What cannot be mimicked is authenticity.

When Obama says, “we are one nation; we are one people; and our time for change has come,” this resonates with his audience not simply because they like the message, but because they hear in this declaration the voice of a genuine catalyst for something much larger than himself.