Pakistan has paid dearly for America’s most generous and tragic patronage
By Roger Morris, War in Context, January 17, 2008

Benazir Bhutto was a precocious 23-year-old in 1976 when she noticed Army Chief of Staff Mohammed Zia ul-Haq come and go at the office of her father, Pakistani prime minister Zulfikar Ali Bhutto. “A short, nervous, ineffectual-looking man,” she remembered the general, “whose pomaded hair was parted in the middle and lacquered to his head.” Along with the hair, Gen. Zia’s thick mustache and diffident manner seemed to Islamabad politicians a Punjabi version of English comedian Terry Thomas. “Bhutto’s butler” they called him. 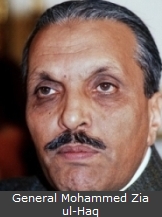 Then, suddenly, in July 1977, Gen. Zia was no longer amusing when his junta arrested Mr. Bhutto and his cabinet, and imposed martial law. There followed more than a decade of military tyranny as Pakistan became, in Salman Rushdie’s phrase, “a nightmarish land.” That era and its sequels would be the setting of Benazir Bhutto’s political career, climaxing in her assassination Dec. 27. She was emblematic of her country’s nightmare, and of the tortuous role the United States played in it. It is a history – forgotten, denied – that haunts us all.

Benazir was a year old in 1954 as Washington adopted Pakistan as its Cold War client, lavishing the first of what would be billions of dollars on a military that by the end of the 1950s seized power amid the country’s chronic poverty and hostility with India. It was cozy, enduring patronage. Pentagon and CIA men shared with their Pakistani peers an occupational contempt for non-alignment and the hindrance of democratic politics.

By 1959, the CIA had stationed an agent in Karachi to advise Pakistani generals on public relations practices that would be enabling military dictatorships to claim legitimacy nearly a half-century later. 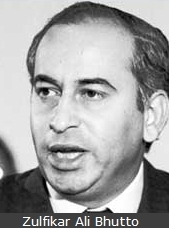 Canny, charismatic, irrepressibly ambitious, U.S.- and Oxford-educated Zulfikar Ali Bhutto was a young civilian minister for the junta in the 1960s, veering between complicity and enmity with the generals in the tangled pattern of Pakistan’s civilian-military politics. He then was an occasional nemesis of Washington, courting Communist China, fiercely bellicose on Kashmir and India. Breaking with the junta and founding his Pakistan Peoples Party in 1967, he inherited power in the 1971 breakaway of Bangladesh, when not even the U.S. could save the generals from the toll of secession, genocide, and another lost war with India.

While Benazir was driving her yellow MG at Radcliffe and Oxford, her father moved to restore his truncated nation and, in the process, seeded much of the 21st century predicament in South Asia – often in collusion with a heedless Washington. Grateful for Pakistan’s role as go-between in their 1971 opening to China, U.S. president Richard Nixon and secretary of state Henry Kissinger joined and financed Mr. Bhutto in his covert intervention against an Afghan regime he claimed was a pawn for Soviet expansion to the Arabian Sea and a menace to Pakistan’s ever-unruly northwest with its Afghan-kindred tribes. In 1973-75 they secretly mounted attacks in the Hindu Kush by radical Islamic Afghan exiles – whose anti-Western politics, terrorist tactics, and control by Pakistan prefigured the mujahedeen and Taliban years before the 1979 Russian invasion, the Afghan civil war, al-Qaeda and 9/11.

Meanwhile, in January 1972, under an awning on the broad lawn of an estate in Multan – an ancient city of Sufi shrines known as Pakistan’s “second heart” – Mr. Bhutto secretly gathered 70 of the country’s finest scientists and asked them to build a nuclear bomb. “They responded,” said one, “enthusiastically.” For years, Washington would look the other way. His foes sneered at Mr. Bhutto as the “Raja of Larkana,” after his estate in the Sind where he and his daughter would be buried. Both were seigniorial in their politics, the PPP family chattel, inherited now by Benazir’s son, Bilawal Bhutto Zardari. “Our feudals,” a CIA agent called them. But unlike Benazir, her father was a reformer as well as demagogue, nationalizing exploitative industries, insurance companies, and exclusive private schools, giving the poorest farmers tax relief and fixing ceilings on land ownership.

Despite periodic repression and no little corruption in his ranks, his constitution in 1973 recognized Islam as the national religion while establishing a parliamentary system to evolve into a secular democracy. He freed Pakistan from the fine-print fetters of the Commonwealth, negotiated the Simla Agreement with India accepting the line of control in Kashmir, recognized Bangladesh and, by 1977, was making peace with Afghanistan. It all won popular support – but challenged the oligarchy, religious right, and allies of both in the military, Pakistan’s ruling triad. Gen. Zia’s coup came with sanction from those forces – and, ultimately, Washington.

After a show trial, they hanged Mr. Bhutto at dawn at the old Rawalpindi prison, not far from where his daughter was murdered three decades later. The U.S. embassy referred to it delicately as “resolving the Bhutto problem,” and the American media made its peace with the winner; Newsweek taken with Gen. Zia’s “brooding eyes,” the Los Angeles Times finding him “low-key, direct, and polite,” an “incredibly canny man” who “talks with quiet sincerity about his country’s problems” – the latter the Times and others didn’t bother to explore. Gen. Zia was no stranger to the Pentagon and CIA, files plump with his 1950s study in the U.S. as a young officer, at the Command and General Staff School at Fort Leavenworth in 1964, and in highly secret Pentagon “command courses” not long before he seized power. Like most of his predecessors and successors, the pomaded general was, to some, Washington’s creature.

Two days after the April 1979 Bhutto hanging, U.S. president Jimmy Carter’s advisers formally approved a major covert intervention using the client Afghan religious radicals against the new Communist regime in Afghanistan – this, eight months before the Soviet invasion that the U.S.-armed and Pakistani-controlled insurgency was designed, in part, to provoke. The ensuing enormity came to seem familiar, though distorted to parody by versions like Charlie Wilson’s War and its Hollywood gloss. Hundreds of millions, ultimately billions, poured into the mujahedeen with their rampant drug trade and fulmination of al-Qaeda; Washington’s unstinting support of Gen. Zia, with more winking at his nuclear arsenal, and with as much as half the U.S. money siphoned off by Pakistan’s Inter-Services Intelligence, the notorious ISI already a state-within-a-state and now dominant in a black economy that eclipsed the open one. When he was assassinated in 1988 in the crash of Pak One, Gen. Zia was returning from a demonstration of a faulty tank the Pentagon was typically keen to sell him, and in tête-à-tête with a U.S. ambassador who knew him when he was still “Bhutto’s butler.” 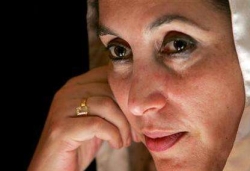 Benazir Bhutto now joined the story, though in ugly anticlimax. While the CIA-Zia combine conducted its Afghan war and associated trade over the 1980s, she worked tirelessly as her father’s chosen successor. This included building furtive ties to the Americans, the CIA covering its bets with subsidies to Ms. Bhutto, some no doubt recycled in paying for her Washington lobbyists.

With Gen. Zia’s murder, she was ready and, like her father, inherited power in a moment of the military’s division. But her tenures as prime minister in 1988-90 and again in 1993-96 were hobbled by the massive power of the ISI, old habits of repression, including the murder of her own dissident brother, and blatant looting by her circle, not least by her husband Asif Zardari. Failure and corruption went unrelieved by any reforms approaching her father’s. It stood to be repeated had Ms. Bhutto held power again – the ISI manacling along with her own corruption – and is in the wings now with Mr. Zardari’s regency over the PPP.

Like her father, like Gen. Zia her nemesis, she was partly America’s creature as well, inserted by the Bush administration, with the blessing of congressional Democrats, to shore up Pakistani President Pervez Musharraf with some coalition manqué appeasing enough of the crowd as well as the triad. As always, there was even an underside to Ms. Bhutto’s vaunted defiance of the Islamic radicals; her own regimes had been instrumental in the rise of the Afghan Taliban and given to quiet accommodation and sharing of spoils with the internal Pakistani zealots.

She was dead only days when it became clear that the tragedy of her last 30 years would continue. In a U.S. presidential campaign that, otherwise, blares change, no candidate dares to change this most disastrous, most bipartisan, most bigoted of foreign policies, in which America’s meddling was so malignant and its ultimate control so illusory. In Pakistan, the old politics go on, including the security of the nuclear arms. None of the ruling triad wants that horror unleashed. The losers, as always, will be the more than hundred million Pakistanis in abject want or on the edge – the historic disgrace of the world’s longest running military despotism, and of America’s most generous and tragic patronage.

If only they buried in the Sind, along with Zulfikar Ali Bhutto and his beloved daughter, that sordid past. For now, we can only follow the poet Faiz Ahmed Faiz: “We will inter hope with appropriate mourning … Every gate of prayer throughout heaven is slammed shut today.”

Roger Morris, who served on the National Security Council staff under Lyndon Johnson and Richard Nixon, is the author of Shadows of the Eagle, a history of U.S. covert intervention and policy in the Middle East and South Asia, to be published this year.
This article first appeared in the Globe and Mail and is reprinted here with the author’s permission.

6 thoughts on “GUEST CONTRIBUTOR – Roger Morris: Burials in the Sind”