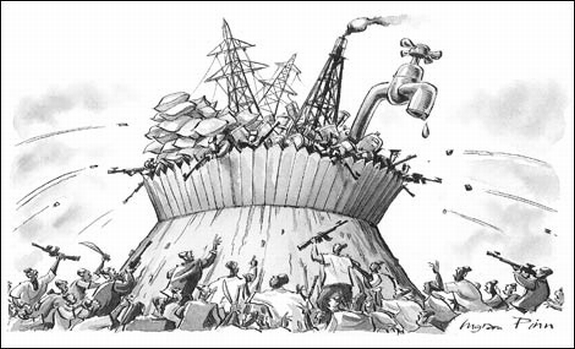 Soccer crowds in England like to abuse match referees by chanting: “You don’t know what you’re doing.” If protesters had been able to get near the World Economic Forum in Davos last week, they could justifiably have aimed the same chant at the world leaders who assembled in the Alps.

These people are meant to be the “masters of the universe”: presidents, prime ministers, bankers, billionaires. If anybody can make sense of world events, it should be them. But the air of confusion in Davos was both palpable and alarming.

The meeting took place against a background of crashing stock markets, panicky interest-rate cuts and a massive bank fraud. The global financial system is now so complicated that nobody really knows how deep its problems run. This central “known unknown” means that all the subsequent big questions are much harder to answer. Will America face a serious recession? It all depends. How bad will the knock-on effects be for the rest of world? Search me. How should politicians and regulators react? Difficult to say. [complete article]

Population growth is a threat. But it pales against the greed of the rich
By George Monbiot, The Guardian, January 29, 2008

…if we accept the UN’s projection, the global population will grow by roughly 50% and then stop. This means it will become 50% harder to stop runaway climate change, 50% harder to feed the world, 50% harder to prevent the overuse of resources. But compare this rate of increase with the rate of economic growth.

Many economists predict that, occasional recessions notwithstanding, the global economy will grow by about 3% a year this century. Governments will do all they can to prove them right. A steady growth rate of 3% means a doubling of economic activity every 23 years. By 2100, in other words, global consumption will increase by about 1,600%. As the equations produced by Professor Roderick Smith of Imperial College have shown, this means that in the 21st century we will have used 16 times as many economic resources as human beings have consumed since we came down from the trees.

So economic growth this century could be 32 times as big an environmental issue as population growth. And if governments, banks and businesses have their way, it never stops. By 2115, the cumulative total rises to 3,200%, by 2138 to 6,400%. As resources are finite, this is of course impossible, but it is not hard to see that rising economic activity – not human numbers – is the immediate and overwhelming threat. [complete article]

The past year has been a harrowing one for the world’s financial markets, shaken by subprime crises, credit crunches, and other ills. Things have only gotten stranger in the past week, with stock prices swinging wildly in every major market – drastically down, then back up.
more stories like this

Last week the Federal Reserve announced the biggest cut in overnight lending rates in more than two decades. Congress, not to be outdone, is slapping together a massive deficit spending package aimed at giving the economy an emergency booster shot.

Despite the anxiety, nobody is stockpiling canned goods just yet. The prevailing assumption in today’s economy is that recessions and bear markets come and go, and that things will work out in the end, much as they have since the Great Depression. That’s because there’s a collective confidence that the market is strong enough to correct itself, and that experts in charge of the financial system will understand how to mount a vigorous defense.

Should we be so confident this time? A handful of financial theorists and thinkers are now saying we shouldn’t. The drumbeat of bad news over the past year, they say, is only a symptom of something new and unsettling – a deeper change in the financial system that may leave regulators, and even Congress, powerless when they try to wield their usual tools. [complete article]