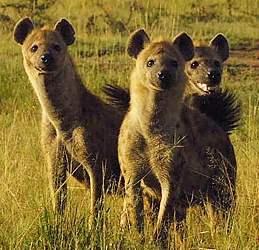 Brain imaging studies have revealed that when people think about other people, parts of the frontal cortex become active. Advocates of the social brain hypothesis say the frontal cortex expanded in our ancestors because natural selection favored social intelligence.

Most of the research on the social brain hypothesis has focused on primates. One reason for that bias, Dr. Holekamp said, is many scientists thought that no other animals were worth studying. “Primatologists have argued for years,” she said, “that primates are unique in terms of the complexity of their social lives.”

From her experience with hyenas, Dr. Holekamp had her doubts. So she began to run experiments on spotted hyenas similar to the ones run on primates. She would play recordings of hyenas, for example, to see if other hyenas recognized them individually. They did. She soon came to see the primates-only view of the social brain as deeply flawed. [complete article]

Editor’s Comment — The idea that social intelligence is the locus of human intelligence seems to me a rock solid assumption. Inventiveness, genius, talent and innovative creativity are invaluable to humanity but they percolate up way off on the social periphery. The stuff that makes us human is not so grand, and, so it appears, stuff that in some significant measure we share with hyenas. What concerns me though is that we seem to be on a social trajectory that may in evolutionary terms end up making us worse off than hyenas.

4 thoughts on “IDEAS & EDITOR’S COMMENT: How to keep up with a hyena”