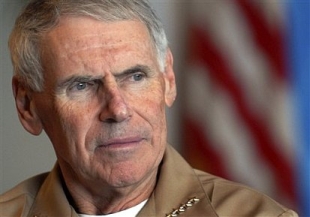 There is a view abroad, commonly held, that Admiral William “Fox” Fallon has been sacrificed, has been gotten out of the way, by the Bush Administration because he disagreed with its policies on Iran. That Fallon stood in the way of the neo-Conservative cabal who is bent on expanding the Middle East conflict and that, when given the order for the attack (at some point in the future), Fallon would have courageously refused the order and reversed the tide of history.

William Fox Fallon was and is a Navy officer and a patriot. As such, if given a legitimate order from the President of the United States, as passed through the legally constituted chain-of-command, he would have obeyed the order. Of this we can have absolutely no doubt. To do otherwise is treason and to believe otherwise is to believe that Fallon would have rejected every moment of training, every tradition of his service, every law and custom that has governed U.S. civilian-military relations. The problem is not that Fox Fallon disagreed with George Bush.

The problem is that he talked to Thomas Barnett. [complete article]

Editor’s Comment — Sometimes it’s better to get out sooner than later.

As much as I respect the knowledge and views of my friend and colleague Mark Perry, it’s hard for me to believe that Fallon didn’t know exactly what he was in for when agreed to spend several days with Thomas Barnett. Indeed, in addition to spending four-and-a-half days with him, Fallon later welcomed Barnett as a speaker at an event the admiral was hosting.

Barnett blogs: “… since I’d offered him a speech in return for the favor of letting me on the tour, and since his staff took that offer up by asking me to address the Bright Star post-exercise gathering of senior Mideast military leaders (which Fallon was hosting) in Cairo the weekend after the trip, I figured I’d get some chance for F2F [face-to-face] follow-up if required.”

Far from thinking that Fallon took a calculated risk in responding to Esquire’s invitation, I’m more inclined to think that on some level he got what he was asking for.

Barnett is upfront in spelling out his own motives where — in a comment on his blog — he refers to “outing” Fallon:

It’s the secrecy by which decisions are made that has poisoned the well. If “outing” any opposition to the administration’s line puts that person at risk, then is the journalist’s choice simply to ignore the internal debate to spare the public such knowledge?

Cause if it is, then we’re offering descriptions of our own government that historically are better leveled at authoritarian regimes, where America constantly needs to be careful shining a light on dissidents lest they fall under attack by authorities.

If we place our military leadership in that category, then this country is in a world of trouble.

The public’s right to know of internal debates on matters as crucial as to whether or not we go to war with Iran is sacrosanct in my mind. Wars of choice have to be national choices, not just leadership choices.

Fallon is now a free agent. Will he use his influence to more effect outside than he did inside the Pentagon? The answer to that may depend on who wins the Democratic presidential nomination, but if after a diplomatic silence of a few weeks, Ret Adm Fallon lends some solid military credibility to the campaign of the young senator from Illinois, I wouldn’t be surprised. And then, speculating even further over the horizon, why should we not ask: Which position offers the greater potential for Fallon to fulfill his stated mission?

He said, “I’d like to continue to do things that will be useful to the world and its inhabitants.”

Was he seeing himself as head of CENTCOM when he said that, or might he have had had some inkling that a larger brief lay ahead? Secretary of Defense, or Secretary of State, perhaps….