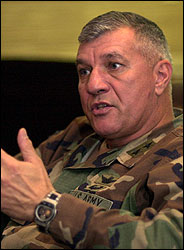 eneral Richard A. Cody graduated from West Point in 1972, flew helicopters, ascended to command the storied 101st Airborne Division, and then, toward the end of his career, settled into management; now, at fifty-seven, he wears four stars as the Army Vice-Chief of Staff. This summer, he will retire from military service.

In 2004, in a little-noted speech, Cody described the Army’s efforts to adapt to its new commitments. (It was attempting to fight terrorism, quell the Taliban, invade and pacify Iraq, and, at the same time, prepare for future strategic challenges, whether in China or Korea or Africa.) The endeavor was, Cody said, like “building an airplane in flight.”

Last week, the General appeared before the Senate Armed Services Committee and testified that this method of engineering has failed. “Today’s Army is out of balance,” Cody said. He continued:

The current demand for our forces in Iraq and Afghanistan exceeds the sustainable supply, and limits our ability to provide ready forces for other contingencies. . . . Soldiers, families, support systems and equipment are stretched and stressed. . . . Overall, our readiness is being consumed as fast as we build it. If unaddressed, this lack of balance poses a significant risk to the all-volunteer force and degrades the Army’s ability to make a timely response to other contingencies.

In 2006, the Army granted eight thousand three hundred and thirty “moral waivers” to new recruits, meaning that it had accepted that number of volunteers with past criminal charges or convictions. The percentage of high-school graduates willing to serve is falling sharply from year to year; so are the aptitude-exam scores of new enlistees. To persuade soldiers and young officers to reenlist after overlong combat tours, the Army’s spending on retention bonuses increased almost ninefold from 2003 to 2006. [complete article]

Petraeus testimony to defend false “proxy war” line
By Gareth Porter, IPS, April 7, 2008
A key objective of the Congressional testimony by Gen. David Petraeus this week will be to defend the George W. Bush administration’s strategic political line that it is fighting an Iranian “proxy war” in Iraq.

Based on preliminary indications of his spin on the surprisingly effective armed resistance to the joint U.S.-Iraqi “Operation Knights Assault” in Basra, Petraeus will testify that it was caused by Iran through a group of rogue militiamen who had split off from Moqtada al-Sadr’s Mahdi Army and came under Iranian control.

But the U.S. military’s contention that “rogue elements” have been carrying out the resistance to coalition forces was refuted by Sadr himself in an interview with al-Jazeera aired Mar. 29 in which he called for the release from U.S. detention of the individual previously identified by Petraeus as the head of the alleged breakaway faction.

The perils of a banker’s war on Iran
By Tony Karon, Rootless Cosmopolitan, April 7, 2008
The neocons are not going to get their war with Iran if it’s to be left to their traditional power centers in the Bush Administration to make the call: They’ve lost the Pentagon, and it’s abundantly clear that neither the uniformed brass nor Defense Secretary Gates have any interest in starting another catastrophic war. And the fact that they still have a solid ally in Vice President Cheney doesn’t mean much, because Cheney is far less influential five years into the Iraq debacle than he had been on its eve. Nor is there any significant support (outside of Israel) among U.S. allies for a confrontational path. Still, all is not lost for that merry little band of neocon bomb throwers who’ve spent the Bush tenure quite literally “setting the East ablaze.” There’s always the Treasury.

Worst. President. Ever.
By Scott Horton, Harper’s, April 5, 2008
History News Network’s poll of 109 historians found that 61 percent of them rank Bush as “worst ever” among U.S. presidents. Bush’s key competition comes from Buchanan, apparently, and a further 2 percent of the sample puts Bush right behind Buchanan as runner-up for “worst ever.” 96 percent of the respondents place the Bush presidency in the bottom tier of American presidencies. And was his presidency (it’s a bit wishful to speak of his presidency in the past tense–after all there are several more months left to go) a success or failure? On that score the numbers are still more resounding: 98 percent label it a “failure.”

Hagee, a Christian Zionist who has been in the spotlight lately for endorsing presidential candidate John McCain and criticizing the Catholic Church, brought hundreds of backers on a solidarity trip to Israel.

Hagee and his group, Christians United for Israel, joined keynote speaker Benjamin Netanyahu, the leader of Israel’s hard-line opposition Likud Party, at a rally in support of Jerusalem remaining united and under Jewish control.

Moussa Abu Marzouk, deputy head of Hamas’ political bureau said that Israel has responded negatively via the Egyptian mediators to an offer for a truce with the group both in the Gaza Strip and in the West Bank.

Abu Marzouk also said that if Israel does not release 350 Palestinian prisoners, it will never get kidnapped soldier Gilad Shalit back alive, a Kuwaiti newspaper reported Sunday. Moussa Abu Marzouk, deputy head of Hamas’ political bureau, told Kuwaiti newspaper Al-Qabas that the militant group will negotiate with Israel over Shalit’s bones if the prisoners are not released.