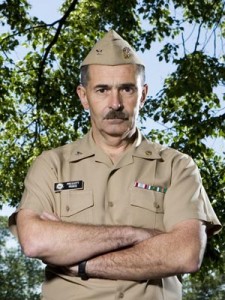 Prince’s meetings with Mohammed also offer a glimpse into the defense strategy in the most high-profile American terrorism case in the post-Sept. 11 world, a trial sure to be followed by millions when it gets underway, probably many months from now.

Prince, a Southern lawyer who only a year ago was running a small civilian defense practice, expects the case to go on for years and culminate in a landmark Supreme Court decision. To him, it’s not only the welfare of his infamous client that matters, but also protecting the integrity of the Constitution, which he says the Bush administration has trampled by coercing information out of Mohammed and subjecting him to a system of military justice that is stacked against him.

“I think it’s the constitutional case of our time,” Prince, 53, said in a recent interview in his office, U.S. and Navy flags front and center on his desk. “Because in the 221st year of America, the question is whether the Constitution applies to the government.”

The waning influence of the US in the Middle East
By Paul Woodward, The National, May 25, 2008
In a week of dramatic developments in the Middle East, the most dramatic development of all may have been the fact that the United States, long considered the region’s indispensable player, was missing in action,” wrote Warren Strobel and Hannah Allam for McClatchy Newspapers.

“As its closest allies cut deals with their adversaries this week over the Bush administration’s opposition, Washington was largely reduced to watching.

“More painful for President Bush, friends he’s cultivated – and spent heavily on – in Lebanon and Iraq asked the United States to remain in the background, underlining how politically toxic an association with the US can be for Arab leaders.”

Misreading the Arab media
By Lawrence Pintak, Jeremy Ginges and Nicholas Felton, New York Times, May 25, 2008
Arabic TV does not do our country justice,” President Bush complained in early 2006, calling it a purveyor of “propaganda” that “just isn’t right, it isn’t fair, and it doesn’t give people the impression of what we’re about.”

The president’s statement, along with the decision by the New York Stock Exchange to ban Al Jazeera’s reporters in 2003, is a prime example of how the Arab news media have been demonized since the 9/11 attacks. As a result, America has failed to make use of what is potentially one of its most powerful weapons in the war of ideas against terrorism.

For proof, in the last year we surveyed 601 journalists in 13 Arab countries in North Africa, the Levant and the Arabian Peninsula. The results, to be published in The International Journal of Press/Politics in July, shatter many of the myths upon which American public diplomacy strategy has been based.

Israel denies entry to high-profile critic Norman Finkelstein
By Yossi Melman, Haaretz, May 25, 2008
The Shin Bet security service detained and deported an American Jewish professor who is a prominent critic of the Israeli occupation when he landed at Ben-Gurion International Airport on Friday.

Professor Norman Finkelstein was interrogated for several hours and held in an airport cell before being put on a plane back to Amsterdam, his point of departure. Finkelstein said he was told he could not return to Israel for 10 years.

The Shin Bet said Finkelstein “is not permitted to enter Israel because of suspicions involving hostile elements in Lebanon,” and because he “did not give a full accounting to interrogators with regard to these suspicions.”

However, in e-mail and phone interviews with Haaretz after leaving Israel for Amsterdam, Finkelstein said, “I did my best to provide absolutely candid and comprehensive answers to all the questions put to me. I am confident that I have nothing to hide. Apart from my political views, and the supporting scholarship, there isn’t much more to say for myself: alas, no suicide missions or secret rendezvous with terrorist organizations. I’ve always supported a two-state solution based on the 1967 borders. I’m not an enemy of Israel.”

Afghanistan adds hunger to its worries
By Pamela Constable, Washington Post, May 25, 2008
For generations, Afghans have depended on cheap, plentiful bread as their main staple. The country’s principal crop is wheat, and its farmers produce more than 5 million tons in a good year. Although that is not enough to feed the entire population, wheat can usually be trucked in from neighboring Pakistan.

Since February, however, a combination of local drought and regional shortages has driven the price of flour here to once-unimaginable levels — as much as $50 for a 40-pound sack. Pakistan, also worried about how to feed 160 million-plus people, has closed its borders to food exports, as have a number of other largely agricultural countries anxious to stave off domestic hardship and political unrest.