The Pentagon’s expansion will be Bush’s lasting legacy
By Frida Berrigan, TomDispatch, May 27, 2008
A full-fledged cottage industry is already focused on those who eagerly await the end of the Bush administration, offering calendars, magnets, and t-shirts for sale as well as counters and graphics to download onto blogs and websites. But when the countdown ends and George W. Bush vacates the Oval Office, he will leave a legacy to contend with. Certainly, he wills to his successor a world marred by war and battered by deprivation, but perhaps his most enduring legacy is now deeply embedded in Washington-area politics — a Pentagon metastasized almost beyond recognition.

The Pentagon’s massive bulk-up these last seven years will not be easily unbuilt, no matter who dons the presidential mantle on January 19, 2009.

A sensible path on Iran
By Zbigniew Brzezinski and William Odom, Washington Post, May 27, 2008
Given Iran’s stated goals — a nuclear power capability but not nuclear weapons, as well as an alleged desire to discuss broader U.S.-Iranian security issues — a realistic policy would exploit this opening to see what it might yield. The United States could indicate that it is prepared to negotiate, either on the basis of no preconditions by either side (though retaining the right to terminate the negotiations if Iran remains unyielding but begins to enrich its uranium beyond levels allowed by the Non-Proliferation Treaty); or to negotiate on the basis of an Iranian willingness to suspend enrichment in return for simultaneous U.S. suspension of major economic and financial sanctions.

Such a broader and more flexible approach would increase the prospects of an international arrangement being devised to accommodate Iran’s desire for an autonomous nuclear energy program while minimizing the possibility that it could be rapidly transformed into a nuclear weapons program. Moreover, there is no credible reason to assume that the traditional policy of strategic deterrence, which worked so well in U.S. relations with the Soviet Union and with China and which has helped to stabilize India-Pakistan hostility, would not work in the case of Iran. The widely propagated notion of a suicidal Iran detonating its very first nuclear weapon against Israel is more the product of paranoia or demagogy than of serious strategic calculus. It cannot be the basis for U.S. policy, and it should not be for Israel’s, either.

IAEA report puts pressure on Iran
By Paul Woodward, The National, May 28, 2008
“A report released on Monday by the UN’s nuclear watchdog organisation presents the clearest indication yet that Iran was working on a nuclear weapon through 2003. But there is no evidence that the weapons programme continued after 2004, it says, echoing a US intelligence assessment in December,” the Los Angeles Times reported.

“The International Atomic Energy Agency (IAEA) said its investigation was based on questions raised by its inspections and on allegations from intelligence reports provided by the US and other countries. The IAEA recently presented Iran with documents that depict a clandestine programme including uranium enrichment, missile development and plans for fitting missiles with nuclear warheads.

McClellan whacks Bush, White House
By Mike Allen, Poltico, May 27, 2008
Former White House Press Secretary Scott McClellan writes in a surprisingly scathing memoir to be published next week that President Bush “veered terribly off course,” was not “open and forthright on Iraq,” and took a “permanent campaign approach” to governing at the expense of candor and competence.

Among the most explosive revelations in the 341-page book, titled “What Happened: Inside the Bush White House and Washington’s Culture of Deception” (Public Affairs, $27.95):

• McClellan charges that Bush relied on “propaganda” to sell the war.

• He says the White House press corps was too easy on the administration during the run-up to the war.

Report details effects of climate change across U.S.
By Juliet Eilperin, Washington Post, May 28, 2008
Global warming is already affecting the nation’s forests, water resources, farmland and wildlife, and will have serious negative consequences over the next 25 to 50 years, according to a report issued yesterday by the federal government.

The scientific assessment by the U.S. Climate Change Science Program, which was commissioned by the Agriculture Department and carried out by 38 scientists inside and outside the government, provides the most detailed look in nearly eight years at how climate change is reshaping the American landscape. The report, which runs 193 pages and synthesizes a thousand scientific papers, highlights how human-generated carbon dioxide emissions from burning fossil fuels have already translated into more frequent forest fires, reduced snowpack and increased drought, especially in the West.

Iraqis losing patience with militiamen
ByTina Susman and Usama Redha, Los Angeles Times, May 27, 2008
Four summers ago, when militiamen loyal to hard-line Shiite Muslim cleric Muqtada Sadr were battling U.S. forces in the holy city of Najaf, Mohammed Lami was among them.

“I had faith. I believed in something,” Lami said of his days hoisting a gun for Sadr’s Mahdi Army militia. “Now, I will never fight with them.”

Poland stalls Bush’s ‘lame duck’ deal on missile shield
By Ian Traynor, The Guardian, May 28, 2008
President George Bush’s hopes of sealing agreement to site parts of the Pentagon’s missile shield in central Europe before he leaves office are fading fast, according to senior Polish officials who despair of reaching to reach a deal with the United States before the end of the year.

The US has been negotiating with the Polish and Czech governments for five years over deploying missile interceptors in Poland and a radar-tracking station in the Czech Republic – the first elements of the American missile defence programme that would be stationed outside the US.

But while the Americans and the Czechs recently concluded their negotiations, the Polish government has balked at the US terms on offer, insisting on large-scale military aid from the US to modernise its armed forces in return for agreeing to host the silos for 10 interceptor rockets.

How the neo-fascists want to defend America
Boston Globe, May 27, 2008 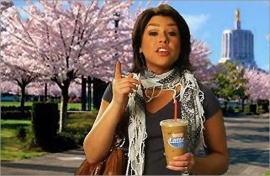 Does Dunkin’ Donuts really think its customers could mistake Rachael Ray for a terrorist sympathizer? The Canton-based company has abruptly canceled an ad in which the domestic diva wears a scarf that looks like a keffiyeh, a traditional headdress worn by Arab men.
more stories like this

Some observers, including ultra-conservative Fox News commentator Michelle Malkin, were so incensed by the ad that there was even talk of a Dunkin’ Donuts boycott.

“The keffiyeh, for the clueless, is the traditional scarf of Arab men that has come to symbolize murderous Palestinian jihad,” Malkin yowls in her syndicated column.