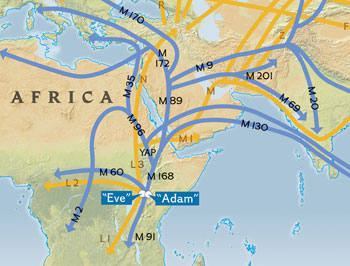 development company controlled by Osama bin Laden’s half brother revealed last year that it wants to build a bridge that will span the Bab el Mandeb, the outlet of the Red Sea to the Indian Ocean. If this ambitious project is ever realized, the throngs of African pilgrims who traverse one of the longest bridges in the world on a journey to Mecca would pass hundreds of feet above the probable route of the most memorable journey in human history. Fifty or sixty thousand years ago a small band of Africans—a few hundred or even several thousand—crossed the strait in tiny boats, never to return.

The reason they left their homeland in eastern Africa is not completely understood. Perhaps the climate changed, or once abundant shellfish stocks vanished. But some things are fairly certain. Those first trekkers out of Africa brought with them the physical and behavioral traits—the large brains and the capacity for language—that characterize fully modern humans. From their bivouac on the Asian continent in what is now Yemen, they set out on a decamillennial journey that spanned continents and land bridges and reached all the way to Tierra del Fuego, at the bottom of South America.

Scientists, of course, have gained insight into these wanderings because of the fossilized bones or spearheads laboriously uncovered and stored in collections. But ancestral hand-me-downs are often too scant to provide a complete picture of this remote history. In the past 20 years population geneticists have begun to fill in gaps in the paleoanthropological record by fashioning a genetic bread-crumb trail of the earliest migrations by modern humans.

Editor’s Comment — In case regular readers here imagine that the only thing that interests me is what’s going on in the Middle East, the truth is, I actually find the story of where we all came from, vastly more interesting.

The resilient Taliban have proved unshakeable across Afghanistan over the past few months, making the chances of a coalition military victory against the popular tide of the insurgency in the majority Pashtun belt increasingly slim.

The alternative, though, of negotiating with radical Taliban leaders is not acceptable to the Western political leadership.

This stalemate suits Pakistan perfectly as it gives Islamabad the opportunity to once again step in to take a leading role in shaping the course of events in its neighboring country.

Pakistan’s General Headquarters in Rawalpindi are thrilled with the Taliban’s sweeping military successes which have reduced President Hamid Karzai’s American-backed government to a figurehead decorating the presidential palace of Kabul; he and his functionaries dare not even cross the street to take evening tea at the Serena Hotel.

Red Cross investigators concluded last year in a secret report that the Central Intelligence Agency’s interrogation methods for high-level Qaeda prisoners constituted torture and could make the Bush administration officials who approved them guilty of war crimes, according to a new book on counterterrorism efforts since 2001.

The book says that the International Committee of the Red Cross declared in the report, given to the C.I.A. last year, that the methods used on Abu Zubaydah, the first major Qaeda figure the United States captured, were “categorically” torture, which is illegal under both American and international law.

The book says Abu Zubaydah was confined in a box “so small he said he had to double up his limbs in the fetal position” and was one of several prisoners to be “slammed against the walls,” according to the Red Cross report. The C.I.A. has admitted that Abu Zubaydah and two other prisoners were waterboarded, a practice in which water is poured on the nose and mouth to create the sensation of suffocation and drowning.

An official investigation has found that US-led air strikes a week ago struck a wedding and killed 47 Afghan civilians, most of them women and children, an official said Friday.

The US-led coalition has steadfastly denied that it killed civilians in the July 6 strikes in the mountains of eastern Nangarhar province, saying only extremist militants had died.

But a nine-member team appointed by President Hamid Karzai to look into the incident found that only civilians were killed in remote Deh Bala district, said the head of the mission, Burhanullah Shinwari.

“We found that 47 civilians, mostly women and children, were killed in the air strikes and another nine were wounded,” said Shinwari, who is also the deputy speaker of Afghanistan’s senate.

Two months after fighting in the capital left scores dead, squabbling Lebanese factions on Friday formed a new Cabinet in which the Shiite Muslim militant group Hezbollah and its allies control key ministries and have the power to veto major decisions.

The Cabinet will serve only until the middle of next year, when elections may determine whether Hezbollah and its allies, which are supported by Iran and Syria, or the Western-backed coalition led by Saad Hariri takes control of the country in the coming years.

Hamas has arrested four members of the Al-Aqsa Martyrs Brigades for firing rockets at Israel or trying to do so, a member of the militant group ruling the Gaza Strip said on Friday.

Four Brigades members “were arrested in Beit Hanun overnight as they prepared to fire rockets in response to Israeli violations” of a three-week-old truce, an official of the group said on condition of anonymity.

Whatever nuance Barack Obama is now adding to his Iraq withdrawal strategy, the core plan on his Web site is as plain as day: Obama would “immediately begin to remove our troops from Iraq. He will remove one to two combat brigades each month, and have all of our combat brigades out of Iraq within 16 months.”

It is a plan that, no doubt, helped Obama get his party’s nomination, but one that may prove difficult if he is elected president.

Military personnel in Iraq are following the presidential race closely, especially when it comes to Iraq.

The soldiers and commanders we spoke to will not engage in political conversation or talk about any particular candidate, but they had some strong opinions about the military mission which they are trying to accomplish, and the dramatic security gains they have made in the past few months.

If the sweeping surveillance law signed by President Bush on Thursday — giving the U.S. government nearly unchecked authority to eavesdrop on the phone calls and e-mails of innocent Americans — is allowed to stand, we will have eroded one of the most important bulwarks to a free press and an open society.

The new FISA Amendments Act nearly eviscerates oversight of government surveillance. It allows the Foreign Intelligence Surveillance Court to review only general procedures for spying rather than individual warrants. The court will not be told specifics about who will be wiretapped, which means the law provides woefully inadequate safeguards to protect innocent people whose communications are caught up in the government’s dragnet surveillance program.

The law, passed under the guise of national security, ostensibly targets people outside the country. There is no question, however, that it will ensnare many communications between Americans and those overseas. Those communications can be stored indefinitely and disseminated, not just to the U.S. government but to other governments.

In the most detailed examination yet of Senator John McCain’s eligibility to be president, a law professor at the University of Arizona has concluded that neither Mr. McCain’s birth in 1936 in the Panama Canal Zone nor the fact that his parents were American citizens is enough to satisfy the constitutional requirement that the president must be a “natural-born citizen.”

The analysis, by Prof. Gabriel J. Chin, focused on a 1937 law that has been largely overlooked in the debate over Mr. McCain’s eligibility to be president. The law conferred citizenship on children of American parents born in the Canal Zone after 1904, and it made John McCain a citizen just before his first birthday. But the law came too late, Professor Chin argued, to make Mr. McCain a natural-born citizen.

“It’s preposterous that a technicality like this can make a difference in an advanced democracy,” Professor Chin said. “But this is the constitutional text that we have.”