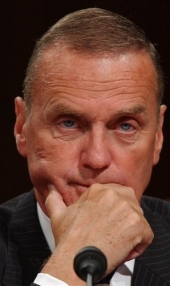 he United States security coordinator for the Israeli-Palestinian conflict, retired general James Jones, is preparing an extremely critical report of Israel’s policies in the territories and its attitude toward the Palestinian Authority’s security services.

A few copies of the report’s executive summary (or, according to some sources, a draft of it) have been given to senior Bush Administration officials, and it is reportedly arousing considerable discomfort. In recent weeks, the administration has been debating whether to allow Jones to publish his full report, or whether to tell him to shelve it and make do with the summary, given the approaching end of President George Bush’s term.

Jones was appointed by Secretary of State Condoleezza Rice following the Annapolis peace conference last November. His assignment was to draft a strategic plan to facilitate stabilization of the security situation, as a necessary accompaniment to Israeli-Palestinian final-status negotiations. In this context, he assessed the PA security forces in the West Bank, whose reform is being overseen by another American general, Keith Dayton. Jones has visited the region several times and met with senior Israeli government officials and army officers.

Editor’s Comment — There’s sure to be a stampede of the Washington press corps trying to get comments from the administration and the presidential candidates on this report …. Of course I jest. Chances are, we won’t hear a whisper. It would be so impolite to raise the matter. Then again, Gen Jones apparently doesn’t have his balls being squeezed in a vice, so maybe he’d be happy to do an off-the-record briefing — if only there was someone with enough guts to give him a call.

As Barack Obama’s profile rose with each victory during the US Democratic primary race, many in the Arab world watched with a mixture of curiosity and a degree of anticipation.

Here was an African-American who had opposed the Iraq war, whose father was raised a Muslim and who represented a new, youthful and relatively unknown face to US politics. Many hoped that if his campaign were successful he might initiate a fresh stance for US policy in the Middle East and be more sympathetic towards the Arab cause. After two terms of George W. Bush’s presidency – deemed a disaster throughout much of the Arab world – the buzz among many in the region was that anybody would be better. And Mr Obama, perhaps more than other candidates, inspired thoughts of a genuine shift.

Yet as he makes his first trip to the Middle East as the presumptive Democratic presidential candidate, he will find that just as questions have been mounting in the US about his credentials to be commander-in-chief, so too is he coming under greater scrutiny among Arabs, with queries about his ability to deal with the crises in their region.

Barack who? Arabs weigh in
By Caryle Murphy, The Christian Science Monitor, July 22, 2008

Senator Obama’s campaign may have launched groundswells of hope, ardor, and optimism at home and in Europe. But at the start of his closely watched trip to the Middle East, the all-but-certain Democratic nominee is little known in the Arab world, and has yet to generate widespread interest or enthusiasm.

From Baghdad to Beirut, people said in recent interviews that they are unfamiliar with his policies, except for his plan to move quickly to pull US troops out of Iraq.

In general, they said they prefer Obama over the likely Republican nominee, Sen. John McCain (R) of Arizona, whom they view as unsympathetic to Arabs.

But even those who like Obama’s personality are not expecting him to initiate major turnabouts on US Middle East policies, particularly on the most contentious one of all, the Israeli-Palestinian conflict.

Obama to Arabs is an American with Muslim middle name
By Caroline Alexander, Bloomberg, July 21, 2008

…many Muslims around the world doubt the 46-year-old Illinois senator will advance their interests much and expect Obama to leave largely unchanged a U.S. foreign policy they perceive as unfairly tilted toward Israel.

Obama’s comment on Jerusalem, in a speech to the American Israel Public Affairs Committee, was a “radical rupture with the Arab public,” said Habib Samarkandi, a professor at the University of Toulouse in France who edits a journal about North African culture. “We discovered our support was based on illusions rather than the reality of the person.”

Obama sought to clarify his position the day after his speech, saying on CNN that “obviously, it’s going to be up to the parties to negotiate a range of these issues. And Jerusalem will be part of those negotiations.”

“The damage is done,” Samarkandi said, discounting the explanation.

It isn’t shocking that, all else being equal, Iraqi Prime Minister Nouri al-Maliki would prefer to have American troops out of his country. But all else isn’t equal. After Maliki caused a stir last week by calling for a timetable for the withdrawal of American troops, other members of his government immediately began qualifying the statement.

The ambivalence is understandable; it reflects the ambivalence of Iraqis in general. Most are deeply suspicious of American motives and want U.S. troops out of their country. At the same time, in towns across Iraq and neighborhoods around Baghdad, U.S. soldiers and Marines are often credited with keeping sectarian tensions under control after the catastrophic violence of 2006 and 2007.

The American presence poses a special dilemma for Maliki and his government. They are loathe to be seen as puppets of the Americans, their positions guaranteed only by U.S. force. But U.S. forces have been an Maliki’s invaluable ally. His enemies — Sunni insurgents and rival Shiite militias — are their enemies.

In Iraq, controversy continued to reverberate between the United States and Iraqi governments over a weekend news report that Mr. Maliki had expressed support for Mr. Obama’s proposal to withdraw American combat troops within 16 months of January. The reported comments came after Mr. Bush agreed on Friday to a “general time horizon” for pulling out troops from Iraq without a specific timeline.

Diplomats from the United States Embassy in Baghdad spoke to Mr. Maliki’s advisers on Saturday, said an American official, speaking on condition of anonymity in order to discuss what he called diplomatic communications. After that, the government’s spokesman, Ali al-Dabbagh, issued a statement casting doubt on the magazine’s rendering of the interview.

The statement, which was distributed to media organizations by the American military early on Sunday, said Mr. Maliki’s words had been “misunderstood and mistranslated,” but it failed to cite specifics.

“Unfortunately, Der Spiegel was not accurate,” Mr. Dabbagh said Sunday by telephone. “I have the recording of the voice of Mr. Maliki. We even listened to the translation.”

But the interpreter for the interview works for Mr. Maliki’s office, not the magazine. And in an audio recording of Mr. Maliki’s interview that Der Spiegel provided to The New York Times, Mr. Maliki seemed to state a clear affinity for Mr. Obama’s position, bringing it up on his own in an answer to a general question on troop presence.

Republican political strategists have long said privately what Republican candidates for President only hinted at publicly. No one can win the White House in 2008 by campaigning to continue an unending war in Iraq.

At the time, the major Republican candidates for President, save John McCain, had already begun to dull the edges on their support for President Bush’s war policy. When asked about the war, Mike Huckabee would talk about the strain on the Arkansas National Guard. Mitt Romney would say he wanted the troops home “as soon as possible.” Rudy Giuliani speculated openly that the so-called “surge” might fail, saying “we have to be ready for that.”

Can Iraqi troops fight — and win — on their own?

Recent evidence suggests that although the Iraqi military has made enormous progress, it is still dependent on small teams of American advisers who can rein in overly aggressive Iraqi commanders, call in U.S. airstrikes and help coordinate basic supplies such as food, rifle-cleaning kits and even printer cartridges.

The advisers could remain on the ground in Iraq long after most U.S. combat troops have left. Col. John Nagl, who resigned last month as commander of the U.S. Army’s school for military advisers, says they are “the key to our exit strategy in Iraq.”

A Gulf newspaper reported Monday that Israel is willing to include jailed Fatah leader Marwan Barghouti in a list of 300 Palestinian prisoners to be freed in exchange for abducted Israeli soldier Gilad Shalit.

Shalit was seized in a cross-border raid in June 2006 and has been held in captivity in the Gaza Strip ever since. Unlike the soldiers who were snatched several weeks later by Hezbollah, Ehud Goldwasser and Eldad Regev, several signs of life from Shalit have been released. Barghouti is serving five life sentences in Israel for his role in a series of deadly terrorist attacks during the second intifada.

The newspaper, Al-Bayan which is published in the United Arab Emirates, also said that the list would also include senior Hamas officials Hassan Salame Abdullah Barghouti and Ibrahim Hamad. But, the report says, Israel will not free the leader of the Popular Front for the Liberation of Palestine, Ahmed Sadat. According to Al-Bayan, the talks on the exchange to secure Shalit’s release have seen significant progress, but Egyptian officials fear that agents in the region will try to scupper the deal.