On his visit to the Middle East, Barack Obama gave ritual affirmations of his support for Israeli policy, but what Israel needs from America isn’t more love, but tougher love.

Particularly at a time when Israel seems to be contemplating military strikes on Iranian nuclear sites, the United States would be a better friend if it said: “That’s crazy” — while also insisting on a 100 percent freeze on settlements in the West Bank and greater Jerusalem.

Granted, not everybody sees things this way, and discussions of the Middle East usually involve each side offering up its strongest arguments to wrestle with the straw men of the other side. So let me try something different.

After I wrote a column last month from Hebron in the West Bank, my blog, nytimes.com/ontheground, was flooded with counterarguments — and plenty of challenges to address them. In the interest of a civil dialogue on the Middle East, here are excerpts from some of the readers’ defenses of Israel’s conduct in the West Bank and my responses:

Editor’s Comment — It’s always refreshing — largely because it’s all too rare — to see a columnist in the mainstream American media stick their neck out and dare to say anything critical of Israel or America’s relations with the Jewish state. On at least one point though, Kristof echoes the conventional and blinkered wisdom: In Palestinian President Mahmoud Abbas, “Israel has its most reasonable partner ever.”

Sure, Mahmoud Abbas may well be an eminently reasonable and decent fellow, but these are not the pivotal requirements in an effective “peace partner.” Whoever the Israelis deal with needs to unambiguously be a representative of the Palestinian people – someone who embodies the will of the people. In fact, both sides need leadership that is genuinely empowered by the will of the people and this is what both sides now lack.

Barack Obama is betraying his promise of change and is in danger of becoming just another political hack.

Yes, just like former maverick John McCain, who has refashioned himself as a mindless rubber stamp for the most inane policies of the miserably failed Bush administration. Both candidates are embracing, rather than challenging, the fundamental irrationality of Bush’s “war on terror,” which substitutes hysteria for rational analysis in appraising the dangers the country faces.

Terrorism is a social pathology that needs to be excised with the surgical precision of detective work, inspired by a high level of international cooperation, the very opposite of the unilateral war metaphor that recruits new generations of terrorists in the wake of the massive armies we dispatch. At a time when we desperately need a president to remind us we have nothing to fear but fear itself, we are increasingly being treated to a presidential campaign driven by fear.

How much does John McCain really know about foreign policy?
By Fred Kaplan, Slate, July 23, 2008

After Barack Obama’s opening day in Iraq this week, the New York Times headline read, “For Obama, a First Step Is Not a Misstep.” The story, by Richard Oppel Jr. and Jeff Zeleny, noted, “Mr. Obama seemed to have navigated one of the riskiest parts of a weeklong international trip without a noticeable hitch.”

That was the big nail-biter: Would Obama, the first-term senator and foreign-policy newbie, utter an irrevocably damaging gaffe? The nightmare scenarios were endless. Maybe he would refer to “the Iraq-Pakistan border,” or call the Czech Republic “Czechoslovakia” (three times), or confuse Sunni with Shiite, or say that the U.S. troop surge preceded (and therefore caused) the Sunni Awakening in Anbar province.

But, of course, it was Obama’s opponent, John McCain—the war hero and ranking member of the Senate Armed Services Committee—who uttered these eyebrow-raisers. “Czechoslovakia” was clearly a gaffe, and understandable for anyone who was sentient during the Cold War years. What about the others, though? Were they gaffes—slips of the tongue, blips of momentary fatigue? Or did they reflect lazy thinking, conceptual confusion, a mind frame clouded by clichéd abstractions?

Back to the future in Iraq and Afghanistan
By Simon Tisdall, The Guardian, July 24, 2008

Consensus is not a word usually associated with Iraq, but as security improves in the wake of the US troop surge, interested parties – the Bush administration, Iraq’s Shia-led government, the Democratic and Republican presidential candidates, the Arab Gulf states and Iran – all agree, to varying degrees and for different reasons, that the time has come to start planning the withdrawal of US combat troops.

The corollary of this proposition is that additional US and Nato forces should be sent to Afghanistan where, in contrast, security is deteriorating. Again, there is a surprising amount of agreement. Democrat Barack Obama argues Afghanistan, not Iraq, is the “central front in the war on terror”. The US defence secretary, Robert Gates, says reinforcements will be sent “sooner rather than later”. The Republican candidate, John McCain concurs. So too does Britain’s Gordon Brown.

But the fact that everyone broadly agrees on a certain course of action does not mean it is necessarily wise or sensible. Military commanders and regional experts cite plenty of reasons why a drawdown in Iraq, whether fast or slow, risks tipping that country back into quasi-anarchy. It is likewise far from obvious that sending more troops to Afghanistan will bring “victory” over the Taliban. It could simply make matters worse. 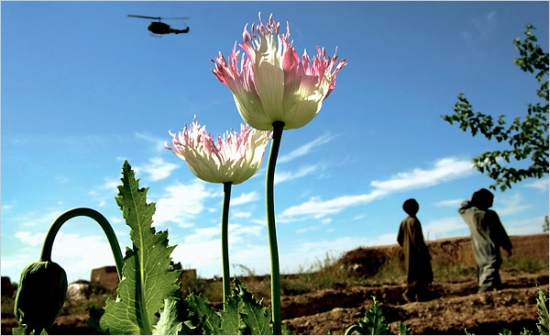 On March 1, 2006, I met Hamid Karzai for the first time. It was a clear, crisp day in Kabul. The Afghan president joined President and Mrs. Bush, Secretary of State Condoleezza Rice and Ambassador Ronald Neumann to dedicate the new United States Embassy. He thanked the American people for all they had done for Afghanistan. I was a senior counternarcotics official recently arrived in a country that supplied 90 percent of the world’s heroin. I took to heart Karzai’s strong statements against the Afghan drug trade. That was my first mistake.

Over the next two years I would discover how deeply the Afghan government was involved in protecting the opium trade — by shielding it from American-designed policies. While it is true that Karzai’s Taliban enemies finance themselves from the drug trade, so do many of his supporters. At the same time, some of our NATO allies have resisted the anti-opium offensive, as has our own Defense Department, which tends to see counternarcotics as other people’s business to be settled once the war-fighting is over. The trouble is that the fighting is unlikely to end as long as the Taliban can finance themselves through drugs — and as long as the Kabul government is dependent on opium to sustain its own hold on power.

It wasn’t supposed to be like this. When I attended an Afghanistan briefing for Anne Patterson on Dec. 1, 2005, soon after she became assistant secretary of state for international narcotics and law-enforcement affairs, she turned to me with her characteristic smile and said, “What have we gotten ourselves into?” We had just learned that in the two previous months Afghan farmers had planted almost 60 percent more poppy than the year before, for a total of 165,000 hectares (637 square miles). The 2006 harvest would be the biggest narco-crop in history. That was the challenge we faced. Patterson — already a three-time ambassador — made me her deputy at the law-enforcement bureau, which has anti-crime programs in dozens of countries.

At the beginning of 2006, I went to the high-profile London Conference on Afghanistan. It was a grand event mired in deception, at least with respect to the drug situation. Everyone from the Afghan delegation and most in the international community knew that poppy cultivation and heroin production would increase significantly in 2006. But the delegates to the London Conference instead dwelled on the 2005 harvest, which was lower than that of 2004, principally because of poor weather and market manipulation by drug lords like Sher Muhammad Akhundzada, who had been governor of the heroin capital of the world — Helmand Province — and then a member of Afghanistan’s Parliament. So the Afghans congratulated themselves on their tremendous success in fighting drugs even as everyone knew the problem was worse than ever.

The Bush administration plans to shift nearly $230 million in aid to Pakistan from counterterrorism programs to upgrading that country’s aging F-16 attack planes, which Pakistan prizes more for their contribution to its military rivalry with India than for fighting insurgents along its Afghan border.

Some members of Congress have greeted the proposal with dismay and anger, and may block the move. Lawmakers and their aides say that F-16s do not help the counterterrorism campaign and defy the administration’s urgings that Pakistan increase pressure on fighters of Al Qaeda and the Taliban in its tribal areas.

The timing of the action caught lawmakers off guard, prompting some of them to suspect that the deal was meant to curry favor with the new Pakistani prime minister, Yousaf Raza Gilani, who will meet with President Bush in Washington next week, and to ease tensions over the 11 members of the Pakistani paramilitary forces killed in an American airstrike along the Afghan border last month.