Barack Obama — smiling, reassuring and firm — was the face of change. Four years after this little-known Illinois state senator delivered the keynote address at the Democratic convention, Obama accepted the Democratic nomination in a stunning testament to the pace of change. Mile High Stadium filled to the rafters with 80,000 walking-on-air Democrats was the place of change. 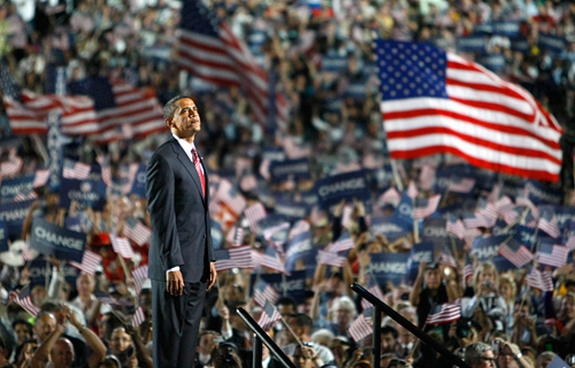 The Democratic Party, hungry for power after being in the wilderness for 20 of the last 28 years, could have played it safe, could have searched until it found a politically acceptable white male politician. But instead, after a spirited and historic battle against Hillary Clinton, the Democrats selected the first African-American presidential nominee in history, decades before the poets, preachers and certainly the political pragmatists dreamed that such a transformation of America was possible.

Watching Barack Obama give the most important — though not the most eloquent or boldest speech of his career — was a reminder that near miracles can happen even in this jaded decade. And, win or lose in November, America has been reshaped forever by this alliance of what Obama described as “young people who voted for the first time and the young at heart.” On a night for defying the taboos of intolerance, the Democratic nominee went out of his way to affirm that “our gay and lesbian brothers and sisters deserve … to live lives free of discrimination,” even if Obama glided by gay marriage.

Yet the subtext of the Obama speech was an acknowledgment of how arduous the political climb to November victory remains.

Editor’s Comment — In anticipating this event, my fear was that it might reinforce the perception that this election has been reduced to a single issue: support for, or opposition to, Barack Obama. But as Obama said: “What the naysayers don’t understand is that this election has never been about me, it’s about you.”

There’s a paradoxical truth in this. Obama can only be a catalyst for change in a country that is sufficiently sickened by its own recent past. At the same time, this hunger for change is not a tidal force and the status quo enjoys support from a much broader base than simply those concentrations of power who benefit most. Without Obama on the political scene, I see America all too easily continuing taking refuge in the familiar.

That this is now Obama’s moment says, I believe, more about him than it says about America.

The world may have only seven years to start reducing the annual buildup in greenhouse gas emissions that otherwise threatens global catastrophe within several decades. That means that between Inauguration Day in January 2009 and 2015, either John McCain or Barack Obama will face the most momentous political challenge of all time.

Reflecting a consensus of hundreds of scientists around the world, the Intergovernmental Panel on Climate Change (IPCC) has affirmed that greenhouse gas emissions are raising the Earth’s temperature. The Earth is on a trajectory to warm more than 4.5 degrees Fahrenheit by around mid-century. Exceeding that threshold could trigger a series of phenomena: Arable land will turn into desert, higher sea levels will flood coastal areas, and changes in the convection of the oceans will alter currents, such as the Gulf Stream, that determine regional weather patterns.

Editor’s Comment — Among the many ways in which Republicans want to couch a Democratic presidency as a threat, none is more potent than that it risks the emasculation of America – that America would thereby surrender its status as the pre-eminent global power. This is what forces Democrats to repeatedly place offerings on the altar of national security. Yet the way in which America does without question continue to wield superpower status is as the world’s number one energy consumer. This is the arena in which American leadership is truly indispensable. This is where America needs to start leading the world instead of dragging it down. This is where America needs to transmute its power status and show that having accumulated great might it can now demonstrate great responsibility.

Georgia is the graveyard of America’s unipolar world
By Seumas Milne, The Guardian, August 28, 2008

If there were any doubt that the rules of the international game have changed for good, the events of the past few days should have dispelled it. On Monday, President Bush demanded that Russia’s leaders reject their parliament’s appeal to recognise the independence of South Ossetia and Abkhazia. Within 24 hours, Bush had his response: President Medvedev announced Russia’s recognition of the two contested Georgian enclaves.

The Russian message was unmistakable: the outcome of the war triggered by Georgia’s attack on South Ossetia on August 7 is non-negotiable – and nothing the titans of the US empire do or say is going to reverse it. After that, the British foreign secretary David Miliband’s posturing yesterday in Kiev about building a “coalition against Russian aggression” merely looked foolish.

That this month’s events in the Caucasus signal an international turning point is no longer in question. The comparisons with August 1914 are of course ridiculous, and even the speculation about a new cold war overdone. For all the manoeuvres in the Black Sea and nuclear-backed threats, the standoff between Russia and the US is not remotely comparable to the events that led up to the first world war. Nor do the current tensions have anything like the ideological and global dimensions that shaped the 40-year confrontation between the west and the Soviet Union.

For the past six years, military relations between the United States and Afghanistan have been governed by a two-page “diplomatic note” giving U.S. forces virtual carte blanche to conduct operations as they see fit.

Although President Bush pledged in a 2005 declaration signed with Afghan President Hamid Karzai to “develop appropriate arrangements and agreements” formally spelling out the terms of the U.S. troop presence and other bilateral ties, no such agreements were drawn up.

But after a U.S.-led airstrike last week that United Nations and Afghan officials have said killed up to 90 civilians — most of them children — Karzai has publicly called for a review of all foreign forces in Afghanistan and a formal “status of forces agreement,” along the lines of an accord being negotiated between the United States and Iraq.

The prospect of codifying the ad hoc rules under which U.S. forces have operated in Afghanistan since late 2001 sends shudders through the Bush administration, which has struggled to finalize its agreement with Baghdad. “It’s never been done because the issues have been too big to surmount,” said one U.S. official who was not authorized to discuss the subject on the record. “The most diplomatic way of saying it is that there are just a lot of moving parts,” the official said.