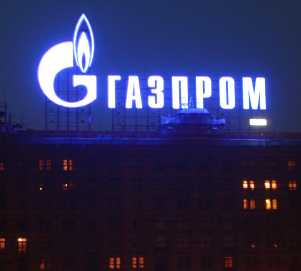 Three weeks after Governor Sarah Palin of Alaska told an interviewer that it seemed, at times, that the Russian prime minister, Vladimir Putin, ‘rears his head’ over her state’s border, a delegation of Russian energy executives, including close associates of Putin were in the capital, Anchorage, for talks on Russian energy investment in her state,” The International Herald Tribune reported.

“The delegation of eight senior executives of Gazprom, the giant Russian natural gas company, met with Tom Erwin, the head of the state’s natural resources department and a Palin appointee, as well as the chief executive of the Texas oil company ConocoPhillips, Jim Mulva.

“Gazprom’s chief executive Aleksei Miller led the meetings on Monday, which were only announced in Moscow on Tuesday. Miller is a close and long-time political ally of Putin.

“While Gazprom has expressed interest, however improbable, of investing in Alaskan pipelines before, the timing of the high-level delegation three weeks before a presidential election was considered peculiar. A Gazprom spokesman said the company had been invited to the state by ConocoPhillips.

“It was not immediately clear whether the Republican candidate for vice president, Palin, was aware of the visit. Her statement that she gained foreign policy expertise from her state’s proximity to Russia has become a campaign issue.” [continued…]

Next victim of turmoil: your salary
By David Leonhardt, New York Times, October 15, 2008

It is possible, for the first time in weeks, to imagine that the credit crisis may be about to ease. But one of the big lessons of the last year has been not to underestimate the severity of the economy’s problems. Those problems are not just about housing or Wall Street.

What, then, will the next stage of the downturn be about? It is likely to revolve around the worst slump in worker pay since — you knew this was coming — the Great Depression. This slump won’t be anywhere near as bad as the one during the Depression, but it also won’t be like anything the country has experienced in a long time.

Income for the median household — the one in the dead middle of the income distribution — will probably be lower in 2010 than it was, amazingly enough, a full decade earlier. That hasn’t happened since the 1930s. Already, median pay today is slightly lower than it was in 2000, and by 2010, could end up more than 5 percent lower than its old peak.

If you look back at poll results over the last few decades, you will see that nothing predicts the public mood quite like income growth.

When incomes are growing at a good clip, as they were in the mid-1980s and late ’90s, Americans are upbeat. When incomes stagnate, as they did in the early ’80s, early ’90s and in the last several years, people get worried about the state of the country. In the latest New York Times/CBS News poll, 89 percent of respondents said that the country had “pretty seriously gotten off on the wrong track,” a record high.

So it’s reasonable to expect that the great pay slump of the early 21st century is going to have a big effect on the next several years. Falling pay will weigh on living standards, consumer spending and economic growth and will help set the political atmosphere that awaits the next president. [continued…]

Under the bailout plan for the nation’s banks unveiled on Tuesday, no heads will roll, as they did in the United Kingdom. No banking executives are likely to go hungry, either. But their parting may not be quite as sweet.

The Treasury’s plan seeks to take aim at the eight-figure pay packages given to Wall Street executives that have enraged so many Americans in the wake of the country’s financial collapse.

Banks that get an equity infusion from the government will have to follow some general rules on paying their top five executives. They will be restricted from offering golden parachutes, as rich severance packages are called, and they will have to pay more taxes if an individual’s compensation exceeds $500,000.

“The key will be how they implement it,” said Representative Barney Frank, Democrat of Massachusetts, who is chairman of the House Financial Services Committee and has long sought to restrict executive pay.

He said he did not think the Treasury plan went far enough, but he praised it as attacking the “perverse incentives” that led to the crisis.

Compensation experts say that the provisions, though politically prudent to appease public anger, will probably have little real impact on how financial executives are paid in coming years. [continued…]

His attack came hours after his bank had been forced to sell a stake in itself to the US Government, following the announcement of President Bush’s plans to partially nationalise America’s biggest financial institutions. [continued…]

The Bush administration issued a pair of secret memos to the CIA in 2003 and 2004 that explicitly endorsed the agency’s use of interrogation techniques such as waterboarding against al-Qaeda suspects — documents prompted by worries among intelligence officials about a possible backlash if details of the program became public.

The classified memos, which have not been previously disclosed, were requested by then-CIA Director George J. Tenet more than a year after the start of the secret interrogations, according to four administration and intelligence officials familiar with the documents. Although Justice Department lawyers, beginning in 2002, had signed off on the agency’s interrogation methods, senior CIA officials were troubled that White House policymakers had never endorsed the program in writing.

The memos were the first — and, for years, the only — tangible expressions of the administration’s consent for the CIA’s use of harsh measures to extract information from captured al-Qaeda leaders, the sources said. As early as the spring of 2002, several White House officials, including then-national security adviser Condoleezza Rice and Vice President Cheney, were given individual briefings by Tenet and his deputies, the officials said. Rice, in a statement to congressional investigators last month, confirmed the briefings and acknowledged that the CIA director had pressed the White House for “policy approval.” [continued…]

The U.S. Justice Department has withdrawn a series of allegations made in federal court that tie Binyam Mohammed, a British resident held at Guantanamo Bay, to a plot to explode a radioactive “dirty bomb” in the United States, blow up apartment buildings here and release cyanide gas in nightclubs.

Defense lawyers said the decision should force the Pentagon to drop charges of conspiracy and material support for terrorism against Mohammed, which were filed by military prosecutors in May. The charges, the lawyers said, are spurious and based on false confessions obtained through torture.

They said the Justice Department dropped key allegations to avoid having to turn over evidence of abuse. The agency did not respond to a request for comment. [continued…]

A growing al Qaida-backed insurgency, combined with the Pakistani army’s reluctance to launch an all-out crackdown, political infighting and energy and food shortages are plunging America’s key ally in the war on terror deeper into turmoil and violence, says a soon-to-be completed U.S. intelligence assessment.

A U.S. official who participated in drafting the top secret National Intelligence Estimate said it portrays the situation in Pakistan as “very bad.” Another official called the draft “very bleak,” and said it describes Pakistan as being “on the edge.”

The first official summarized the estimate’s conclusions about the state of Pakistan as: “no money, no energy, no government.” [continued…]

Some Afghans live under Taliban rule – and prefer it
By Anand Gopal, Christian Science Monitor, October 15, 2008

After a gang of thieves had continually terrorized an Afghan neighborhood near here months ago, locals decided they’d had enough. “We complained several times to the government and even showed them where the thieves lived,” says Ahmad, who goes by one name.

But the bandits continued to operate freely. So the villagers turned to the Taliban.

The militants’ parallel government here in Logar Province – less than 40 miles from Kabul, the capital – tried and convicted the men, tarred their faces, paraded them around, and threatened to chop off their hands if they were caught stealing in the future. The thieves never bothered the locals again.

In several provinces close to Kabul, the government’s presence is vanishing or already nonexistent, residents say. In its place, a more effective – and brutal – Taliban shadow government is spreading and winning local support. [continued…]

American military successes in Iraq have prompted growing numbers of well-trained “foreign fighters” to join the insurgency in Afghanistan instead, the Afghan defense minister said on Tuesday.

The minister, Gen. Abdul Rahim Wardak, said at a news conference that the increased flow of insurgents from outside Afghanistan had contributed to the heightened intensity of the fighting here this year, which he described as the “worst” since the American-led forces toppled the Taliban government in 2001. American commanders have said that overall violence here has increased by 30 percent in the past year and have called for more troops.

The defense minister said that “the success of coalition forces in Iraq” had combined with developments in countries neighboring Afghanistan to cause “a major increase in the number of foreign fighters” coming to Afghanistan. [continued…]

I am a friend of Mr. Ayers. In fact, I met him in the same way Mr. Obama says he did: 10 years ago, Mr. Ayers was a guy in my neighborhood in Chicago who knew something about fundraising. I knew nothing about it, I needed to learn, and a friend referred me to Bill.

Bill’s got lots of friends, and that’s because he is today a dedicated servant of those less fortunate than himself; because he is unfailingly generous to people who ask for his help; and because he is kind and affable and even humble. Moral qualities which, by the way, were celebrated boisterously on day one of the GOP convention in September.

Mr. Ayers is a professor of education at the University of Illinois at Chicago (UIC), where his work is esteemed by colleagues of different political viewpoints. Herbert Walberg, an advocate of school vouchers who is a visiting fellow at the Hoover Institution, told me he remembers Mr. Ayers as “a responsible colleague, in the professional sense of the word.” Bill Schubert, who served as the chairman of UIC’s Department of Curriculum and Instruction for many years, thinks so highly of Mr. Ayers that, in response to the current allegations, he compiled a lengthy résumé of the man’s books, journal articles, guest lectures and keynote speeches. Mr. Ayers has been involved with countless foundation efforts and has received various awards. He volunteers for everything. He may once have been wanted by the FBI, but in the intervening years the man has become such a good citizen he ought to be an honorary Eagle Scout. [continued…]