The tribal areas of western Pakistan along with the least developed parts of southern and eastern Afghanistan have become the epicenter of international handwringing.

On one level, “the problem” revolves around government military forces being constrained by an international boundary, while their opponents can use that constraint to their advantage. On another level, there’s a struggle to find a suitable balance between bullying and helping as Nato pursues its bomb and build strategy.

The one constant is that no one seems to think that the indigenous population has the preeminent right to determine its own future.

Consider the Korengal Valley in eastern Afghanistan and the people who inhabit this rugged terrain. A fascinating photographic essay in the Boston Globe last week sheds light on some of the inherent contradictions in western efforts to impose a military solution on a topographical reality.

Look at the human craft in the physical structure of this mountainside settlement — something that might not be immediately apparent when viewing this hamlet down the barrel of a gun: 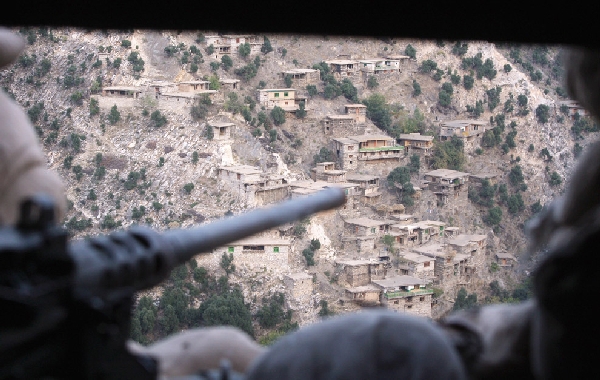 Note, there are no roads. To the western eye, this is a development problem.

At the same time it is also an extraordinary indigenous accomplishment. Men and women and donkeys alone did all the heavy lifting. But instead of admiring the ability of people to master the art of survival in a challenging environment, we regard them as living in a state of deprivation. With a road, life would be better — or so we think.

But do they want a road? Apparently not. The report says: “U.S. and Afghan officers tried to convince the [Korengal Valley] elders to accept a new paved road through the Korengal Valley as part of a large American development project. The elders refused the road, however, saying that they would prohibit anyone in their valley from working on the project.”

What would a road provide for the people of Korengal? Most predictably, the means for Americans to establish larger and more heavily equipped military bases. Beyond that, a road would provide the means to tame a harsh environment. It would diminish the value of the resilience of those who for centuries have survived without a road.

Where a people invest their pride, we see their backwardness and then are perplexed when they spurn our goodwill. We suffer from the burden that dogs every evangelist: how can you insult someone and help them at the same time?

Meanwhile, the narrative that drives out all others is that Afghanistan is now in a downward spiral with the Talilban having established control over a substantial portion of the country.

We have built the Afghan police into a less well-armed, less well-trained version of the Army and launched them into operations against the insurgents. Meanwhile, nobody is doing the job of actual policing—rule of law, keeping the population safe from all comers (including friendly fire and coalition operations), providing justice and dispute resolution, and civil and criminal law enforcement. As a consequence, the Taliban have stepped into this gap; they currently run thirteen law courts across the south, and ninety-five per cent of the work of these courts is civil law, property disputes, criminal matters, water and grazing disputes, inheritances etc.—basic governance things that the police and judiciary ought to be doing, but instead they’re out in the countryside chasing bad guys. Where governance does exist, it is seen as corrupt or exploitative, in many cases, whereas the people remember the Taliban as cruel but not as corrupt. They remember they felt safer back then. The Taliban are doing the things we ought to be doing because we are off chasing them instead of keeping our eye on the prize—securing and governing the people in a way that meets their needs.

Kilcullen could have said, “The Taliban have established law and order across much of southern Afghanistan. What can we learn from their success?”

Most importantly, in a war that was originally billed as being driven by a moral imperative, how has it come to pass that in this “good war” our allies are corrupt while our opponents are able to establish some system of justice?

To ask such a question is not to excuse the brutality of the Taliban, but merely underline how utterly lost we have become in a country and a region we insist on trying to reshape even while it still eludes our understanding.

1 thought on “EDITORIAL: Who comes first?”