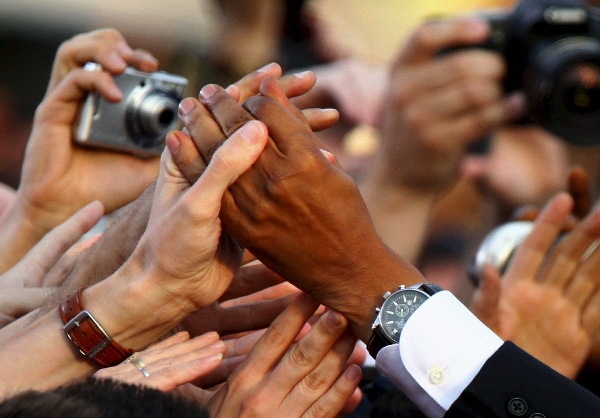 Is it OK to be liberal again, instead of progressive?
By Michael Lind, Salon, November 21, 2008

If the conservative era is over, can liberals come out of their defensive crouch and call themselves liberals again, instead of progressives?

In the last two decades, Democratic politicians, including Barack Obama, have abandoned the term “liberal” for “progressive.” The theory was that Richard Nixon, Ronald Reagan and George W. Bush — and Rush Limbaugh, Sean Hannity and Pat Buchanan — had succeeded in equating “liberal” in the public mind with weakness on defense, softness on crime, and “redistribution” of Joe the Plumber’s hard-earned money to the collective bogey evoked by a former Texas rock band’s clever name: Teenage Immigrant Welfare Mothers on Dope.

I’ve always been uncomfortable with this rather soulless and manipulative exercise in rebranding, for a number of reasons. [continued…]

Editor’s Comment — To my mind, neither liberal nor progressive are particularly useful terms. “Progressive” seems a rather hollow slogan when self-applied. If an agenda can objectively be described as being progressive, all well and good, but when its own proponents say it’s progressive it says little more than we know about a product when it gets branded “new and improved.”

On the other hand “liberal” has the connotations of personal freedom, but in America liberty is pretty much a bipartisan value. To be liberal, as in open-minded, is a good thing, yet who — whatever the facts might otherwise indicate — sees themselves as closed-minded? Then again, from a conservative point of view, liberal can connote the hedonistic libertine. Thus the culture wars get framed as pitting those Americans who have values against those who supposedly lack them.

What unambiguously distinguishes the left from the right is our view of the relationship between the individual and society. For the right, the interests of society are best served by protecting the interests of the individual; for the left it is the reverse. Our core value is that we are in this together. We believe in the common good. We believe that an understanding that “we share a common destiny” is more than a social ideal; it has become a global imperative.

The election of Barack Obama to be the 44th president is profoundly historic. We have at long last been able to come together in a way that has eluded us in the long history of our great country. We should celebrate this triumph of the true spirit of America.

Election Day celebrations were replicated in time zones around the world, something we have not seen in a long time. While euphoria is ephemeral, we must endeavor to use its energy to bring us all together as Americans to cope with the urgent problems that beset us.

When Obama takes office in two months, he will find a number of difficult foreign policy issues competing for his attention, each with strong advocates among his advisers. We believe that the Arab-Israeli peace process is one issue that requires priority attention. [continued…]

Editor’s Comment — It’s good to see two foreign-policy heavyweights, Brent Scowcroft and Zbigniew Brzezinski, advocate that the Arab-Israeli conflict should receive priority attention by President Obama. Their argument, in diplomatically tempered language, is however a bit tepid. Not only does the issue need to be among those at the top of Obama’s agenda but the current administration’s policy of promoting division among Palestinians needs to be explicitly reversed. To say that “if the peace process begins to gain momentum, it is difficult to imagine that Hamas will want to be left out,” is to imply that Hamas’ current isolation is self-imposed.

The issue that needs to be grasped by the incoming administration as well as the next Israeli government is that Palesinian unity will not merely serve the interests of the Palestinian people; it is the only basis upon which a viable peace agreement can be built. The effort to destroy Hamas through a war of attrition in which Gaza has been placed under siege for the last two years, has failed.

Recognition of Israel’s right to exist, and renunciation of violence, need to be seen not as necessary preconditions for entering into political negotiations but seen instead for what they realistically are: the reward for the successful completion of those negotiations.

Recasting the war on terrorism
By Spencer Ackerman, The Washington Independent, November 20, 2008

Buoyed by high expectations for the first year of Barack Obama’s administration, an informal coalition of progressive national-security and civil-liberties experts are urging the president-elect to redefine the war on terrorism.

Eight years of the Bush administration’s approach to counterterrorism have yielded two open-ended and bloody wars; a massively expanded security apparatus, and spending on defense far outpacing outlays on domestic programs, even during a crisis-plagued economy.

Yet while liberals have spent much of this time opposing the Bush administration’s agenda, many of their proposals for Obama go beyond merely rolling back President George W. Bush’s policies — withdrawing from Iraq, shuttering the Guantanamo Bay detention complex, abolishing torture — to offer new areas of emphasis, like stabilizing Afghanistan, an Arab-Israeli peace and a re-envisioned balance between security and liberty. [continued…]

Over the past seven years, the US government’s consistent disregard for human rights in fighting terrorism has diminished America’s moral authority, set a negative example for other governments, and undermined the goal of reducing anti-American militancy around the world. The use of torture, unlawful rendition, secret prisons, unfair trials, and long-term, arbitrary detention without charge has been both morally wrong and counterproductive. [Read the report]

Liberty and security: recommendations for the next administration and Congress
The Constitution Project, November 18, 2008

“Liberty and Security: Recommendations for the Next Administration and Congress reflects the ongoing, collaborative efforts of a coalition of more than 25 leading organizations and 75 individuals to provide policymakers with a framework for addressing liberty and security issues. The catalogue includes recommendations drawn from the shared knowledge and experience of a broad coalition of groups devoted to exploring the intersection of civil liberties and national security. [continued…]

On Capitol Hill’s Rayburn office building, in the private chambers of the House Energy and Commerce Committee, hangs an enormous satellite photograph of the planet earth. Beneath the picture is a couch, where, according to sources familiar with the committee, long-time Chairman John Dingell is fond of sitting. From that couch, they say, the venerable Michigan Democrat, who has served for 53 years, has been known to point up to the photo and say, “That is the jurisdiction of this committee.”

Now, Dingell is no longer in control of the world.

House Democrats Thursday morning took the remarkable step of ousting Congress’s longest-serving member as head of the powerful energy panel. They replaced Dingell with the more liberal Rep. Henry Waxman (D-Cal.), whose energy plans are more in-line with those of President-elect Barack Obama.

Environmentalists, though, are thrilled. For decades, Dingell has fought successfully against efforts to adopt stricter emissions rules and force Detroit’s automakers in the direction of greater fuel-efficiency. With the arrival of an Obama administration next year, many climate-change groups had wondered how the new president would sneak his ambitious energy plans past the powerful head of the energy panel. Now he won’t have to. Waxman, a fiery environmentalist who has butted heads with Dingell on these issues, is seen to symbolize the end of Dingell’s obstructionism. [continued…]

Economic news across the world was almost uniformly bad as slumping Japanese exports threatened to push the economy deeper into recession and the Swiss central bank unexpectedly slashed interest rates by a full percentage point. [continued…]

Everyone’s talking about a new New Deal, for obvious reasons. In 2008, as in 1932, a long era of Republican political dominance came to an end in the face of an economic and financial crisis that, in voters’ minds, both discredited the G.O.P.’s free-market ideology and undermined its claims of competence. And for those on the progressive side of the political spectrum, these are hopeful times.

There is, however, another and more disturbing parallel between 2008 and 1932 — namely, the emergence of a power vacuum at the height of the crisis. The interregnum of 1932-1933, the long stretch between the election and the actual transfer of power, was disastrous for the U.S. economy, at least in part because the outgoing administration had no credibility, the incoming administration had no authority and the ideological chasm between the two sides was too great to allow concerted action. And the same thing is happening now.

It’s true that the interregnum will be shorter this time: F.D.R. wasn’t inaugurated until March; Barack Obama will move into the White House on Jan. 20. But crises move faster these days. [continued…]

The drive for dwindling resources, including energy and water, combined with the spread of nuclear weapons technology could make large swaths of the globe ripe for regional conflicts, some of them potentially devastating, according to a report released by the National Intelligence Council yesterday.

The report, Global Trends 2025, covers a range of strategic issues, including great-power rivalry, demographics, climate change, terrorism, nuclear proliferation, energy and natural resources. It makes for sometimes grim reading in imagining a world of weak states bristling with weapons of mass destruction and unable to cope with burgeoning populations without adequate water and food.

“Those states most susceptible to conflict are in a great arc of instability stretching from Sub-Saharan Africa through North Africa, into the Middle East, the Balkans, the Caucasus, and South and Central Asia, and parts of Southeast Asia,” the quadrennial report says.

At the heart of its deepest pessimism is the Middle East, which it suggests could tip into a nuclear arms race if Iran goes ahead with such weapons. [continued…]

On Oct. 26, Syrian intelligence alerted U.S. forces in Iraq to Abu Ghadiyah’s whereabouts, at which time, U.S. Signals Intelligence (SIGINT) operatives began to track him, probably through his satellite telephone.

Four Blackhawk helicopters took off for the northeastern Syrian village of al-Sukkiraya, about five miles from the Euphrates river, an area where a compound of new homes was being built, according to U.S. intelligence officials.

At this point, the raid went wrong. As the U.S. Special Forces poured out of the aircraft, shots were fired and a gunfight broke out that lasted for 10 to 15 minutes. Abu Ghadiya was to have been captured and flown to Iraq for interrogation. Instead he was killed in the fighting, along with seven Syrian civilians, including four children, most of them members of the same family.

“There weren’t to have been any civilian casualties, no collateral damage,” a U.S. intelligence official said. “We wanted the [expletive] alive.” The U.S. raiding team carried off two captives for interrogation.

“The problem with these kinds of tactics lies with the fact that so many things can go wrong, and they usually do,” said Middle East expert Tony Cordesman. “You don’t want to solve one problem only to create a dozen others.”

But the praise of U.S. officials for Syria’s part was deeply appreciative. “The Syrians were perfect; they gave us the works,” said one U.S. official familiar with the incident. [continued…]