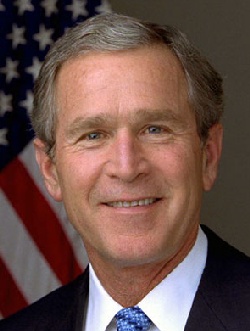 any Americans cherish a vicarious pride in the power of the US presidency.

The idea that the President of the United States holds the most powerful office in the world, translates into a sense of immense collective power. Were these same Americans to discover that the president takes his marching orders from a petty crook who governs a country of seven million, they would be shocked, outraged and humiliated as American power was exposed as being hollow at its core. Yet how else can we interpret the play of power between Israel and the United States, if Ehud Olmert can be taken at this word?

Last week, as global leaders felt compelled to respond to a popular outcry of rage provoked by Israel’s barbaric assault of Gaza, the UN Security Council became the focal point of unavoidable pressure to act — even if its action was utterly symbolic and totally ineffectual. But what was unprecedented was that for once, the United States was prepared to stand in solidarity with other nations calling for an immediate ceasefire.

Israel’s prime minister saw the danger of an awkward precedent being set and thus made it clear that Israel would not tolerate what it seemed to regard as a diplomatic act of insubordination.

“In the night between Thursday and Friday, when the secretary of state wanted to lead the vote on a ceasefire at the Security Council, we did not want her to vote in favor,” Olmert said.

“I said ‘get me President Bush on the phone’. They said he was in the middle of giving a speech in Philadelphia. I said I didn’t care. ‘I need to talk to him now’. He got off the podium and spoke to me.

As Olmert recounted this course of events while giving a speech in the southern Israeli city of Ashkelon, it seemed apparent that he took a certain pride in the fact that Condoleezza Rice had been “shamed” by the about-face that the US, under her leadership at the UN, was forced by Israel to take.

A State Department official felt compelled to assert that, “The government of Israel does not make US policy.”

The evidence seems to suggest otherwise.

6 thoughts on “EDITORIAL: The government of Israel does not make US policy — or does it?”