President Barack Obama urged Israel on Thursday to open its borders with Gaza.

The plea came in a speech that signalled the new US administration’s shift from Bush-era policy on the Middle East and the world as a whole. In a high-profile address on his second day in office, just hours after he signed an executive order to close the centre at Guantánamo Bay, Mr Obama proclaimed that the US would “actively and aggressively seek a lasting peace between Israel and the Palestinians” in the wake of this month’s Gaza war.

“The outline for a durable ceasefire is clear: Hamas must end its rocket fire: Israel will complete the withdrawal of its forces from Gaza: the US and our partners will support a credible anti-smuggling and interdiction regime, so that Hamas cannot re-arm,” the US president said.

“As part of a lasting ceasefire, Gaza’s border crossings should be open to allow the flow of aid and commerce, with an appropriate monitoring regime, with the international and Palestinian Authority participating.” [continued…]

Editor’s Comment — Anyone who’s been paying attention for long enough knows that one of the primary causes of the war on Gaza was Israel’s unwillingness to lift the siege. Hamas wasn’t firing Qassams at Sderot in the hope of destroying Israel; its aim was to get a crippling economic embargo lifted. So when Obama calls for the borders to open “to allow the flow of aid and commerce” he is posing to challenge to Israel. This really should be headline news for every major American newspaper. But it isn’t. This suggests that, at least when it comes to Israel-related issues, Obama is going to face an unprecedented task: how does an American president effectively use the bully pulpit in front of a press corps that willfully ignores what he’s saying? 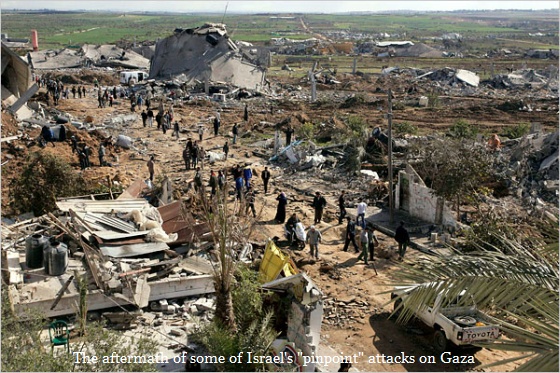 President Obama yesterday eliminated the most controversial tools employed by his predecessor against terrorism suspects. With the stroke of his pen, he effectively declared an end to the “war on terror,” as President George W. Bush had defined it, signaling to the world that the reach of the U.S. government in battling its enemies will not be limitless.

While Obama says he has no plans to diminish counterterrorism operations abroad, the notion that a president can circumvent long-standing U.S. laws simply by declaring war was halted by executive order in the Oval Office.

Key components of the secret structure developed under Bush are being swept away: The military’s Guantanamo Bay, Cuba, facility, where the rights of habeas corpus and due process had been denied detainees, will close, and the CIA is now prohibited from maintaining its own overseas prisons. And in a broad swipe at the Bush administration’s lawyers, Obama nullified every legal order and opinion on interrogations issued by any lawyer in the executive branch after Sept. 11, 2001. [continued…]

President Barack Obama intends to use conservative values for progressive ends. He will cast extreme individualism as an infantile approach to politics that must be supplanted by a more adult sense of personal and collective responsibility. He will honor government’s role in our democracy and not degrade it. He wants America to lead the world, but as much by example as by force.

And in trying to do all these things he will confuse a lot of people.

One of the wondrous aspects of Obama’s inaugural address is the extent to which those on the left and those on the right both claimed our new president as their own. [continued…]

A battle over what happened in Gaza
By Jeffrey Fleishman, Los Angeles Times, January 23, 2009

The graves are dug, the wounded tended, but the battle over what happened in the Gaza Strip during Israel’s 22-day offensive remains unfinished.

International organizations, citing videos and witnesses, say Israel may have committed war crimes in Gaza’s villages and city alleys. The Israel Defense Forces deny such allegations, issuing their own video clips and assessments.

Ninety-four percent of Israelis supported the campaign to stop Hamas from its long- standing practice of indiscriminately firing hundreds of rockets a week into southern Israel. Human rights organizations say the Palestinian militant group’s targeting of towns such as Sderot and Ashkelon also constitutes war crimes, as does the practice by Hamas leaders, regarded by the West and a number of Arab countries as terrorists, of using civilians as human shields.

The legal implications of the deaths of at least 1,300 Palestinians, more than half of them civilians, will be debated, with much of the wrangling likely to concern such issues as proportionality, targeting and how careful efforts to not harm the innocent can go horribly wrong when tank shells stray from their coordinates. [continued…]

No home to return to in Gaza
By Griff Witte, Washington Post, January 23, 2009

When members of the Sultan family ran from their home as an Israeli tank shelled its northern wall, there was no time to shut the front door. There was also no need.

The house, which family patriarch Samir al-Sultan began building at the age of 15, was all but destroyed as Israeli forces advanced into the Gaza Strip in early January, turning the house’s contents into a mangled mess of glass and mortar.

With no home to return to and no prospects for rebuilding, the Sultans on Thursday were among the thousands of Palestinians in Gaza searching for somewhere to go. [continued…]

The government is set to approve a bill Sunday to grant aid and support to Israel Defense Forces officers in cases where they face suits for alleged war crimes from Operation Cast Lead.

Former Republican presidential candidate Gary Bauer, who serves on the executive board of Christians United for Israel, says Mitchell is not the right man for the job.

“George Mitchell has a reputation on his previous work in the Middle East as being evenhanded between Israel and the Palestinian extremists. And for me that means the appointment is bad because I don’t believe we should be evenhanded between Israel and the Palestinians,” he contends. “I think Israel is our only reliable ally in the Middle East. I believe that they are right in this ongoing war that is being waged against them.” [continued…]

Editor’s Comment — Gary Bauer joins Abe Foxman and others in an ongoing effort to attack the idea that the United States should play the role of honest broker in the Middle East. Instead, they assert that America’s sole responsibility is to stand up as Israel’s defender. By doing this, they are actually opening a space for an honest debate. They are correct in pointing to an ambiguity in the position of anyone who professes an unwavering commitment to Israel’s security at the same time as supporting impartial mediation between Israel and the Palestinians.

In fact, Israel’s national security should solely be the concern of the Israeli government. By making Israel’s security the concern of the US government, Washington allows itself to be held hostage to every Israeli policy and action that is done in the name of security. What the Obama administration needs to do is to say to Israel, as your ally we will support you in so far as you act both in your national interests and in the interests of regional peace. But when you fail to meet this measure, you will also lose our support. Our support is not unconditional.