Turkey’s rebirth as a global power
By Paul Woodward, War in Context, February 2, 2009

After Turkey’s Prime Minister Recep Tayyip Erdogan made his much-publicized exit from Davos, Alon Liel, the former Chargé d’Affaires of Israel in Ankara, wrote in Yediot Aharonot, “If you want to become a European, start behaving like one, then maybe we’ll see you in Davos again next year.”

Liel went on to remind his Israeli readers that in November 2007 Shimon Peres made history when he addressed Turkey’s parliament. “And it was the same Peres who was dealt, along with all of us, a stinging slap on the face by the Turkish prime minister who briefly turned Davos into the sewer of Istanbul.”

Erdogan’s offense was that he had risen above his station which dictates that a non-Western leader must at all times show deference to his Western counterparts — even deference to Washington Post columnists!

That Erdogan should be receiving rebukes for stepping out of line is ironic since in so many respects he is such a thoroughly westernized Muslim. (For instance, he doesn’t engage in that unconscionable act of defiance against Western values that Iran’s leaders indulge in: declining to wear a necktie.)

But Haaretz quotes a senior European official as saying: “Erdogan wants to be part of the European Union, but now he can forget about it.”

A number of analysts are now suggesting that because Turkey won’t march in lockstep with the Israeli-Western alliance, it has blown its chances of becoming a major strategic player in Middle East politics.

The problem with this interpretation of recent events is that Turkey doesn’t need Western approval to enter this role; this is a role it already enjoys — we simply haven’t been paying attention.

…the challenge of the Islamic world now is to recover from the chaos imposed upon it by the United States — in wrecking al Qaeda.

Whether the country is Iran, whether the country is Iraq or Afghanistan, whether it’s Kuwait and Saudi Arabia, the desire now is for stability, within an Islamic framework. And simply put, Turkey is so far the most powerful Islamic country, and so much the most economically effective, and historically the leader of the region that it is very difficult to find any way in which it will not reemerge into that role. [Listen to the whole of Friedman’s excellent eight-minute podcast.]

Meanwhile, in the Washington Post, Soner Cagaptay is clearly concerned that Turkey is drifting out of the Western orbit:

Turkey is a special Muslim country. Of the more than 50 majority-Muslim nations, it is the only one that is a NATO ally, is in accession talks with the European Union, is a liberal democracy and has normal relations with Israel. Under its current government by the Justice and Development Party (AKP), however, Turkey is losing these special qualities. Liberal political trends are disappearing, E.U. accession talks have stalled, ties with anti-Western states such as Iran are improving and relations with Israel are deteriorating. On Thursday, for example, Prime Minister Recep Tayyip Erdogan walked out of a panel at Davos, Switzerland, after chiding Israeli President Shimon Peres for “killing people.” If Turkey fails in these areas or wavers in its commitment to transatlantic structures such as NATO, it cannot expect to be President Obama’s favorite Muslim country.

Consider the domestic situation in Turkey and its effect on relations with the European Union. Although Turkey started accession talks, that train has come to a halt. French objections to Turkish membership slowed the process, but the impact of the AKP’s slide from liberal values cannot be ignored. After six years of AKP rule, the people of Turkey are less free and less equal, as various news and other reports on media freedom and gender equality show. In April 2007, for instance, the AKP passed an Internet law that has led to a ban on YouTube, making Turkey the only European country to shut down access to the popular site. On the U.N. Development Program’s gender-empowerment index, Turkey has slipped to 90th from 63rd in 2002, the year the AKP came to power, putting it behind even Saudi Arabia. It is difficult to take seriously the AKP’s claim to be a liberal party when Saudi women are considered more politically, economically and socially empowered than Turkish women.

Readers of the Post will no doubt be shocked to learn that the plight of women in Turkey is worse than it is in Saudi Arabia, but does Cagaptay actually believe this or is he purposely misrepresenting the facts?

What he appears to have done is conflate two separate measures. On the Human Development Index, Saudi Arabia currently ranks 61 and Turkey 84. The Saudis rank much higher because they are much wealthier. But in terms of the gender empowerment measure, Turkey is 0.298, above Saudi Arabia at 0.254. By this measure, women are more empowered in Turkey than they are in Saudi Arabia or Egypt (0.263), but less empowered than in Iran (0.347).

If the White House still hasn’t decided which Muslim capital from which President Obama will make his major address to the Muslim world, maybe they should consider the rich symbolism that would derive from choosing Istanbul.

It might not be the capital of modern Turkey (that being Ankara) but both as the former Ottoman capital and as the geographic bridging point between Europe and Asia, this would provide the perfect place from which to acknowledge the global realignment that is taking place. By going to Istanbul, Obama would visibly be refuting the ideology of a clash of civilizations and showing that he welcomes the changes that cultural isolationists are currently struggling to resist. 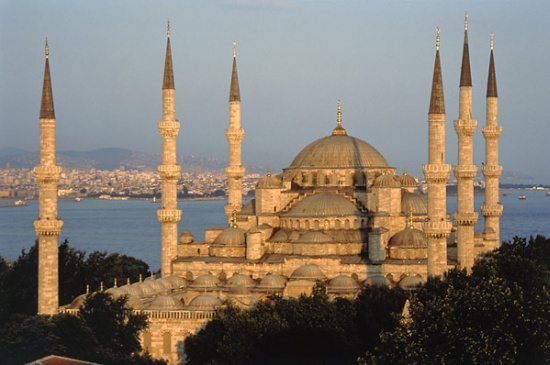