The Israel lobby tightens its stranglehold on American politics
By Paul Woodward, War in Context, March 11, 2009

Chas Freeman’s eloquent yet blunt explanation of why he has decided not to take up the post of chairman of the National Intelligence Council was described as “intemperate” by the ever-temperate James Fallows and as “a bit too hot, for my taste” by Joe Klein. (Both Klein and Fallows, I should note, were not among Freeman’s critics.)

To those who regard Freeman’s statement as somehow an affront to the decorum that Washington expects I would ask this: Is it better to apply make-up over a festering boil, or is it better to lance it?

Joe Klein, even now unwilling to acknowledge the existence of an “Israel lobby,” insists that Freeman was the victim of an attack by a mob — a largely Jewish neoconservative mob — but not a lobby. That strikes me as merely a semantic quibble. If Israel “lobby” sounds too dignified, I have no problem with calling it the “Israel mob” — it is indeed a kind of political mafia. 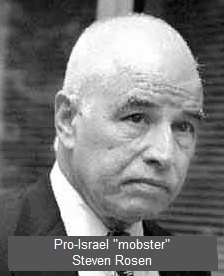 But however anyone wants to characterize or label the Israel lobby, no one can dispute that it is tenacious. Freeman’s assessment that were he to take up the intelligence position he would remain “under constant attack” is most likely accurate. His choice to remain in private life is understandable. If anything constructive is to come out of this episode — and I think it can — it is that the workings of the Israel lobby are now more transparent than ever.

The campaign against Freeman was led by the indicted former director of AIPAC, Steven Rosen. While the victory champagne was no doubt still flowing, the editors of the Washington Post saw fit — with amazing timing — to add their own toast by calling on the Attorney General to drop the case against Rosen in which he has been charged under the Espionage Act. The Post argues:

The government has the right to demand strict confidentiality from government officials and others who swear to protect its secrets. The Justice Department errs egregiously and risks profound damage to the First Amendment, however, when it insists that private citizens — academics, journalists, think tank analysts, lobbyists and the like — also are legally bound to keep the nation’s secrets. The prosecution in effect criminalizes the exchange of information.

I’m no legal expert, but it would seem that the case hinges not on whether individuals outside government can legally be the recipients of classified information. Rather, the case would seem to rest on a determination of AIPAC’s actual nature.

Even if it is not registered as an agent of a foreign government, if AIPAC can be demonstrated to have been functioning as such, then as an AIPAC official, Rosen could presumably be shown to have been acting on behalf of the Israeli government.

As Douglas M. Bloomfield, a former legislative director and chief lobbyist for AIPAC, writes: “The American Israel Public Affairs Committee and its leaders could be the biggest losers in a case that threatens to expose the group’s inner secrets.”

Although AIPAC claims it has nothing to do with the convoluted case, it is also on trial, in a way. The organization fired the pair [Steven Rosen and Keith Weissman] and said they were rogues acting beneath the group’s standards. That will be shot full of holes from all directions in court, whether in the criminal case or in a likely civil suit by the defendants claiming damage to their reputations and careers.

The mere threat of a multimillion-dollar civil suit could prompt a very generous settlement offer from AIPAC in exchange for a vow of silence from the former staffers. But don’t worry; AIPAC can easily afford it.

Soon after the FBI raided AIPAC offices, the organization launched a fund-raising campaign to defend against any charges, and the appeals for money didn’t stop when it fired the pair. Since the scandal broke in 2004, AIPAC’s fund-raising juggernaut has hauled in so much dough that one senior staffer told me that “it’s coming in faster than we know what to do with it.”

JTA quoted tax records showing AIPAC raised $86 million in 2007, doubling 2003’s $43 million. Not all of that money was a result of the espionage case, but many millions were.

In cutting loose the pair, AIPAC insisted it had no idea what they were doing. Not so, say insiders, former colleagues, sources close to the defense, and others familiar with the organization.

One of the topics AIPAC won’t want discussed, say these sources, is how closely it coordinated with Benjamin Netanyahu in the 1990s, when he led the Israeli Likud opposition and later when he was prime minister, to impede the Oslo peace process being pressed by President Bill Clinton and Israeli Prime Ministers Yitzhak Rabin and Shimon Peres.

That could not only validate AIPAC’s critics, who accuse it of being a branch of the Likud, but also lead to an investigation of violations of the Foreign Agents Registration Act.

Clearly, nothing worries AIPAC and its supporters more than the possibility that the organization — and by extension the Israel lobby as a political force — might face wider public scrutiny.

The campaign against Chas Freeman was not driven by an exaggerated estimation of his importance; it was a strategic battle in defense of the lobby’s deeply entrenched political authority. The importance of the fight was evident by the fact that it was fought in the open. But having come right out into the open, it is now that much more difficult for the lobby to retreat into the shadows.

And as Steven Rosen once wrote in an AIPAC internal memo: “A lobby is like a night flower. It thrives in the dark and dies in the sun.”

3 thoughts on “EDITORIAL: The Israel lobby tightens its stranglehold on American politics”