The rise of Israeli extremism
By Paul Woodward, War in Context, March 26, 2009

The cartoonist, Pat Oliphant, caused a stir this week with a cartoon (below) which Anti-Defamation League director, Abraham Foxman, said: “employs Nazi imagery by portraying Israel as a jack-booted, goose-stepping headless apparition. The implication is of an Israeli policy without a head or a heart.”

Did Oliphant go too far? Or was he merely using incendiary symbolism to draw attention to the ruthlessness of the Zionist war machine? 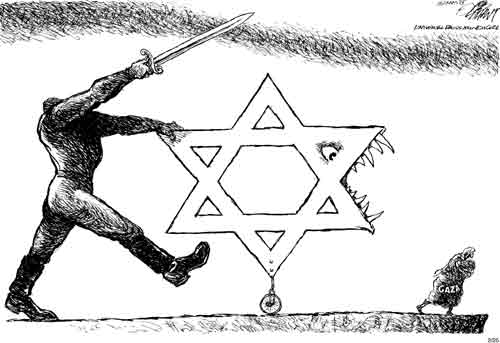 The role of the Israeli Defense Forces chief rabbi in portraying the war on Gaza as a religious war has been widely reported. Brig Gen Avichai Rontzki used a line from a classical Hebrew text and turned it into a war slogan: “He who is merciful to the cruel will end up being cruel to the merciful.”

Another rabbi, David Bar Hayim, conveyed a similar message in a broadcast on Israel National News TV where he cited scriptural authority when saying: “In a time of war, one does not distinguish between the different individuals on the enemy side of the fence, of the conflict. One has to fight the enemy … without any thought for such distinctions.” (A statement interestingly reminiscent of the Bush doctrine.) The rabbi also said: “I don’t believe that there are any innocent [Palestinian] civilians in this situation.”

Peering over the horrible pile of Palestinian civilian casualties that has immediately resulted, it’s fairly easy to see where this is going in the medium-to-longer term. The zealot settlers and their clerical accomplices are establishing an army within the army so that one day, if it is ever decided to disband or evacuate the colonial settlements, there will be enough officers and soldiers, stiffened by enough rabbis and enough extremist sermons, to refuse to obey the order. Torah verses will also be found that make it permissible to murder secular Jews as well as Arabs. The dress rehearsals for this have already taken place, with the religious excuses given for Baruch Goldstein’s rampage and the Talmudic evasions concerning the assassination of Yitzhak Rabin. Once considered highly extreme, such biblical exegeses are moving ever closer to the mainstream.

The extremists are already on the march — literally. And they are being provided with the full support of the state of Israel.

Earlier this week, supporters of Rabbi Meir Kahane descended on the Israeli-Palestinian town of Umm al-Fahm (which was established in 1265). 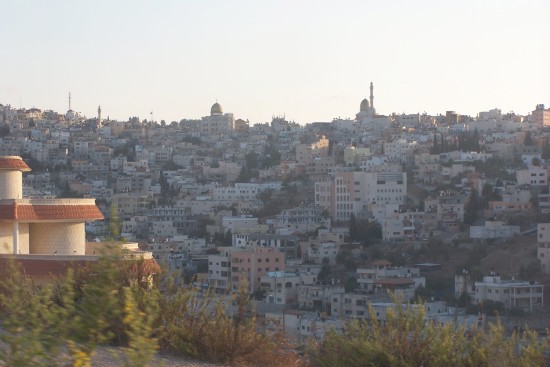 A hundred militant Zionists, each protected by 25 Israeli police officers, had a simple message for the residents.

Just to be clear: Umm al-Fahm is within the 1967 borders of Israel and is populated by Arab Israeli citizens.

The demonstration was also reported by Al Jazeera:

After deeming the Umm al-Fahm march a success, Israel’s extreme right announced it plans to publish regular reports on activities in Arab towns and villages.

“We intend on forming a monitoring committee to counter any infringements of the law in the Arab sector. The committee will be headed by Knesset Member Michael Ben Ari (National Union) and other right-wing activists will serve as members as well,” a rightist source told Ynet Tuesday.

Radical right-wing activist Itamar Ben Gvir explained: “The committee will be made up of subsections, with each section in charge of different things, like building violations, affiliation with terror groups, and infringing on Jewish freedom of movement.” The Right, he added, is now contemplating holding processions in other Arab towns as well.

While the majority of Israelis might identify themselves as secular, with militant nationalism on the rise, religious zealotry and military power have become fused together in the conception of an embattled state that needs show little restraint in its efforts to defend itself.

The spirit of Israel’s indomitable military might is captured in the video below: “Don’t Mess With The IDF.”

It’s tone might seem adolescent, yet it is adolescents and young adults who fill the ranks of the IDF and who celebrated the war in Gaza by adorning themselves with T-shirts that advocate shooting pregnant Muslim women. (Anyone seeing this video who understands Hebrew is welcome to explain the lyrics in a comment. The passage in English comes from The Matrix: Reloaded, which an Israeli reviewer said: “intentionally or not, is the most powerful pro-Israel movie since Cast a Giant Shadow — the story of the Independence War — and Operation Thunderbolt — the story of the Entebbe rescue.”)

Update: The soundtrack for this video combines “The Last Zionist” by Israeli rappers Subliminal and Hazel, followed by “We Are Still Here” by the Dutch DJ Korsakoff.

7 thoughts on “EDITORIAL: The rise of Israeli extremism”