The poor must be included in a global economy
By Bob Geldof, Financial Times, April 1, 2009

In an age characterised by the death of trust we find comfort in being able to blame everyone. It is entirely reasonable that thousands will protest, hopefully peacefully, against bankers who stuck their noses in the trough, regulators who turned away and governments who kept smiling as the tax take grew. The truth is they could just as easily protest against themselves for blindly succumbing to this leveraged society. We must now clear up the mess. Amid all the experts who failed to call this disaster, only one got it right. It was Bob Dylan, who said: “Money doesn’t talk. It swears.”

The system was always skewed and its rewards asymmetric. We built a global economy that excluded half of the globe. We marginalised the productive capacity of the 3bn people who live on less than $2 a day. By excluding them, we deprived them of the income they need to buy our stuff and consigned them to ill-health, lack of education and conflict. Instability is inherent in asymmetry. It will topple over. The first task of the Group of 20 nations must be to bring the peripheral economies and their people into the centre. [continued…]

Editor’s Comment — In the midst of an economic crisis, the spirit “charity begins at home” always prevails. But in America on top of that there is a near universal assumption that the United States leads the world when it comes to foreign aid. That might be true as a raw number, but when it comes to aid as a proportion of GDP the US lags way behind the leading nations. 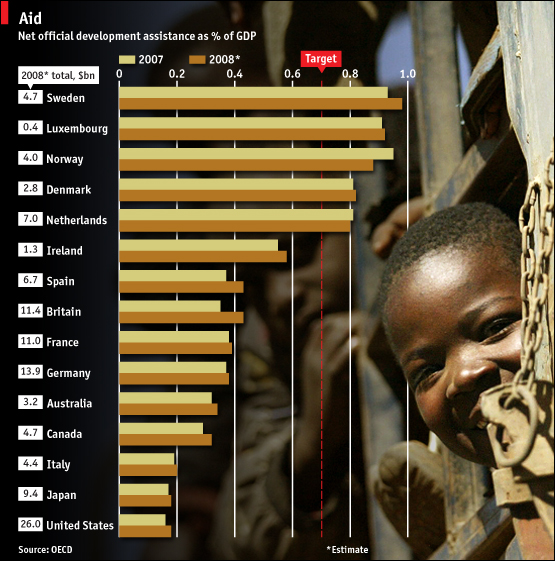 A key element of the crisis is a deficit of ethics
A letter from Pope Benedict XVI to Prime Minister Gordon Brown, March 31, 2009

Financial crises are triggered when — partially due to the decline of correct ethical conduct — those working in the economic sector lose trust in its modes of operating and in its financial systems. Nevertheless, finance, commerce and production systems are contingent human creations which, if they become objects of blind faith, bear within themselves the roots of their own downfall. The only true and solid foundation is faith in the human person. For this reason all the measures proposed to rein in this crisis must seek, ultimately, to offer security to families and stability to workers and, through appropriate regulations and controls, to restore ethics to the financial world. [continued…]

Administration seeks an out on bailout rules for firms
By Amit R. Paley and David Cho, Washington Post, April 4, 2009

The Obama administration is engineering its new bailout initiatives in a way that it believes will allow firms benefiting from the programs to avoid restrictions imposed by Congress, including limits on lavish executive pay, according to government officials.

Administration officials have concluded that this approach is vital for persuading firms to participate in programs funded by the $700 billion financial rescue package.

The administration believes it can sidestep the rules because, in many cases, it has decided not to provide federal aid directly to financial companies, the sources said. Instead, the government has set up special entities that act as middlemen, channeling the bailout funds to the firms and, via this two-step process, stripping away the requirement that the restrictions be imposed, according to officials. [continued…]

A fierce internal battle within the White House over the disclosure of internal Justice Department interrogation memos is shaping up as a major test of the Obama administration’s commitment to opening up government files about Bush-era counterterrorism policy.

As reported by Newsweek, the White House last month had accepted a recommendation from Attorney General Eric Holder to declassify and publicly release three 2005 memos that graphically describe harsh interrogation techniques approved for the CIA to use against Al Qaeda suspects. But after the story, U.S. intelligence officials, led by senior national-security aide John Brennan, mounted an intense campaign to get the decision reversed, according to a senior administration official familiar with the debate. “Holy hell has broken loose over this,” said the official, who asked not to be identified because of political sensitivities.

Brennan is a former senior CIA official who was once considered by Obama for agency director but withdrew his name late last year after public criticism that he was too close to past officials involved in Bush administration decisions. Brennan, who now oversees intelligence issues at the National Security Council, argued that release of the memos could embarrass foreign intelligence services who cooperated with the CIA, either by participating in overseas “extraordinary renditions” of high-level detainees or housing them in overseas “black site” prisons. [continued…]

Barack Obama’s Department of Justice made headlines in late February when it adopted the Bush administration’s notoriously unconstitutional stance on prisoners at Bagram Air Base, claiming that such “detainees” have no right to challenge their detention. As the Independent UK reported at the time, “less than a month after signing an executive order to close the Guantanamo Bay prison camp, President Barack Obama has quietly agreed to keep denying the right to trial to hundreds more terror suspects held at a makeshift camp in Afghanistan that human rights lawyers have dubbed ‘Obama’s Guantanamo.'”

Four prisoners at Bagram, however, have been challenging this position in court since before Obama took office — and today, three of them won a major victory.

In a momentous, 53-page decision by Judge John D. Bates of the U.S. District Court for the District of Columbia, a U.S. court concluded “for the first time,” according to the International Justice Network, “that detainees held indefinitely without charge in U.S. custody in Afghanistan are entitled to challenge their detentions in U.S. courts.” [continued…]

Less than a week after helping disarm and disband a Sunni paramilitary group that had once been on its payroll, the U.S. military has now directly clashed with some of its former allies.

Multi-National Division – Baghdad announced today that a U.S. aircraft targeted “Sons of Iraq” members who were spotted planting a roadside bomb last night north of Taji. According to a coalition news release, one man was killed in the strike; two others were found wounded in a nearby house. At least one of the men was identified has having served in the “Sons of Iraq.” That’s the largely Sunni tribal group, bankrolled by the U.S. to keep order in their neighborhoods — and to stop fighting American forces. Many of the “Sons” were former insurgents, and insurgent allies. If they flip back to being enemies of the government, the Iraq enterprise could be in deep, deep trouble. [continued…]

Outcry in Pakistan after video of a 17-year-old girl’s flogging by the Taliban is shown on TV
By Declan Walsh, The Guardian, April 4, 2009

The Pakistani government has ordered an inquiry into the flogging of a 17-year-old woman by Taliban militants in the troubled Swat valley, after public outrage triggered by shocking video footage of the punishment.

The images, played yesterday on private television channels, show a burka-clad woman being pinned to the ground by two men while a third whips her backside 34 times. The woman is seen screaming and begging for mercy as a crowd of largely silent men look on. She is accused of having had an illegal sexual relationship, according to local law. Her brother is among those restraining her.

President Asif Ali Zardari led a wave of public condemnation, and ordered the arrest of the perpetrators. Prime minister Yousaf Raza Gilani termed it “shocking” and called for an immediate inquiry. At the supreme court, the newly reinstated chief justice, Iftikhar Chaudhry, summoned officials to a hearing scheduled for Monday to investigate the incident. [continued…]

The Obama administration is “comfortable” with the British government’s attempts to engage Hezbollah, the Iranian-backed group that the U.S. labels a terrorist organization, a senior British diplomat asserts.

Bill Rammell, Britain’s minister of state for foreign and Commonwealth affairs, said in a brief interview late last week in Damascus that despite protests to the contrary, the new U.S. administration does not object to the fledgling contacts with the political wing of the Lebanon-based Shiite Muslim group, which also has a heavily armed militia.

Britain likens the attempt to engage Hezbollah, launched quietly this year, to its outreach to political leaders of the Irish Republican Army — a move that helped quell the Northern Ireland conflict. [continued…]