“Turkey’s greatness lies in your ability to be at the center of things. This is not where East and West divide — this is where they come together.” Barack Obama addressing the Turkish parliament, April 6, 2009.

Prime Minister Recep Tayyip Erdogan of Turkey is a man of brisk, borderline brusque, manner and he does not mince his words: “Hamas must be represented at the negotiating table. Only then can you get a solution.”

We were seated in his suite at London’s Dorchester Hotel, where a Turkish flag had been hurriedly brought in as official backdrop. Referring to Mahmoud Abbas, the beleaguered Fatah leader and president of the Palestinian Authority, Erdogan said, “You will get nowhere by talking only to Abbas. This is what I tell our Western friends.”

In an interview on the eve of President Barack Obama’s visit to Turkey, his first to a Muslim country since taking office, Erdogan pressed for what he called “a new balance” in the U.S. approach to the Middle East. “Definitely U.S. policy has to change,” he said, if there is to be “a fair, just and all-encompassing solution.” [continued…]

Editor’s Comment — Obama was well-advised in making Turkey one of his first foreign destinations. As a country that most Americans associate with a bird, its significance is not widely appreciated. But just look at a map. If any country can claim to be located at the strategic center of the world it is Turkey. No other country has as pivotal a position between multiple continents. It is no accident that Istanbul (or as it was, Constantinople) has been the capital of four successive empires. If the Turks now want to reclaim some of their former geopolitical power, the basis of that claim does not have to be imperial nostalgia. Turkey matters because this is where continents and cultures all converge. 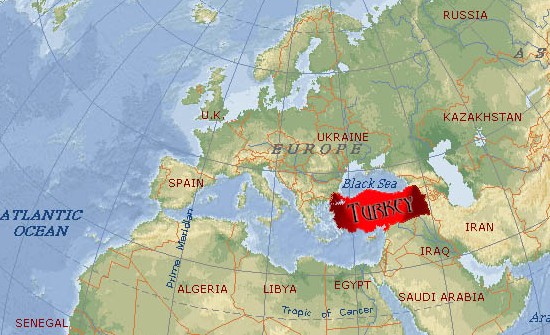 Obama in Istanbul: Test for the West
By Nathan Gardels, Huffington Post, April 5, 2009

“If we can show that a big Muslim nation can modernize itself with the help of friends,” former German Foreign Minister Joschka Fischer has argued on behalf of Turkey’s admission to the European Union, “it demonstrates that a strong civil society, equal rights for men and women, the rule of law, an independent judiciary, a modern administration and modern economy are not in contradiction to Islam. This would be the most powerful message against the jihadists and terrorists.”

That is certainly President Barack Obama’s hope when he attends the UN “Alliance for Civilizations” gathering in Istanbul this week after a pointed visit in Ankara to the grave of Ataturk, modern Turkey’s secular saint and founder. The meeting is of particular importance because Mohamed Khatami, the reformist former president of Iran is a key member of the group, as is Federico Mayor, the former secretary general of UNESCO who, long before 9/11, extolled the tolerant virtues of “La Convivencia” — the peaceful coexistence of Muslims, Jews and Christians in Andalusian Spain from 711-1492.

Whether Obama’s hope is justified is indeed the great test for the West in relations with the Muslim world. [continued…]

The Obama administration is preparing a broad stage for Middle East diplomacy stretching from the Palestinians to Syria to Iran. It’s a supremely ambitious agenda, and before the curtain goes up, Obama should explore his options and risks carefully.

By seeking to engage all the major actors in the Middle East at once, Obama is pursuing a general settlement of tensions in a dangerously unstable region. That’s intriguing and also worrying for countries in the Middle East. It makes Saudis and Israelis — not to mention Iranians and Syrians — nervous.

If you’re looking for a historical analogy for this scale of diplomacy, think of the Congress of Vienna of 1815. That gathering produced a new security architecture for a Europe that had been violently destabilized by revolutionary France — in something like the way the Middle East has been upset by the 1979 Iranian revolution. [continued…]