The scapegoat with a savage bite
By Paul Woodward, War in Context, May 16, 2009 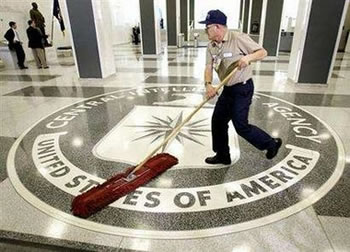 veryone’s afraid of the CIA.

On PBS’s Washington Week last night, in a roundtable discussion on the Pelosi-CIA joust, there was a clear consensus among the assembled reporters: anyone who dares pick a fight with the CIA does so at their own peril and is almost certain to lose.

As is always the case, the only thing the press is interested in here is the fight — who, if anyone, is telling the truth is apparently of no consequence. It also appears that journalists — just as much as the White House and Congress — are afraid of challenging the agency. No one’s at risk of ending up with a bullet in the back of their head, but that isn’t because the CIA is benign — it just means it can exploit much subtler but equally effective methods for accomplishing its aims.

Consider for a moment that we supposedly live in a democracy. How can it be that the head of state, the executive and legislative branches of government and the erstwhile Fourth Estate should all be afraid of a single government agency?

Why is it that an agency that enjoys the medieval privilege of operating with a “black budget” in the ostensible interests of national security, nevertheless always seems able to lift the umbrella of secrecy as and when it serves its own interests?

After Nancy Pelosi accused the CIA of lying about briefing Congressional leaders on waterboarding, CIA Director Leon Panetta’s response was to publicly issue a statement to CIA employees. This was a multi-layered message.

Top layer: The agency didn’t lie. He said: “…our contemporaneous records from September 2002 indicate that CIA officers briefed truthfully on the interrogation of Abu Zubaydah, describing ‘the enhanced techniques that had been employed.’ ” (This isn’t a particularly solid statement. “Contemporaneous records” — so might there be other records that tell a different story? “CIA officers briefed truthfully” — briefed who truthfully? “Describing ‘the enhanced techniques that had been employed'” — why didn’t he put it in black and white: Nancy Pelosi was told by CIA officers that Abu Zubaydah was waterboarded?)

Next layer: I’m defending you guys (and want to be seen defending you — hence, he didn’t just send out the memo but also put it on the CIA web site). He said: “We are an Agency of high integrity, professionalism, and dedication. Our task is to tell it like it is — even if that’s not what people always want to hear. Keep it up. Our national security depends on it.”

Next layer: But I do have to cover my own ass: “Let me be clear: It is not our policy or practice to mislead Congress.”

Why should the employees of the CIA need reminding that they shouldn’t mislead — which is to say, lie to or deceive — Congress? Oh yes, because it’s already public knowledge that in 2005, even after having been requested by Rep. Jane Harman not to do so, they destroyed video tapes of the torture of Abu Zubaydah and Abd al-Rahim al-Nashiri — tapes that would almost certainly have been used as evidence if anyone is ever prosecuted for torture.

For the last seven years, the CIA has been playing what probably ranks as the most masterful political game in its history. When 9/11 should have posed an existential threat to the agency, instead it was able to distance itself from the Bush administration to such a degree that it ended up being perceived as the victim of a neocon vendetta. Former agents became honorary members of the anti-Bush movement with Valerie Plame as their poster child.

Even now, as the agency fends off demands for investigations into its use of torture, a defense narrative has already being wheeled into service. We were just honest government employers doing what we were asked to do. The real offenders were in Cheney’s office.

I have no problem with the idea that it is the decision-makers and architects of the torture program who should be held responsible. But that doesn’t mean that torturers and murderers get off the hook. Indeed, an agency that goes to such lengths to protect its own doesn’t just need reform; it needs breaking up.

3 thoughts on “EDITORIAL: The scapegoat with a savage bite”