Does the NYT‘s David Sanger know how to use the internet?
By Paul Woodward, War in Context, May 18, 2009 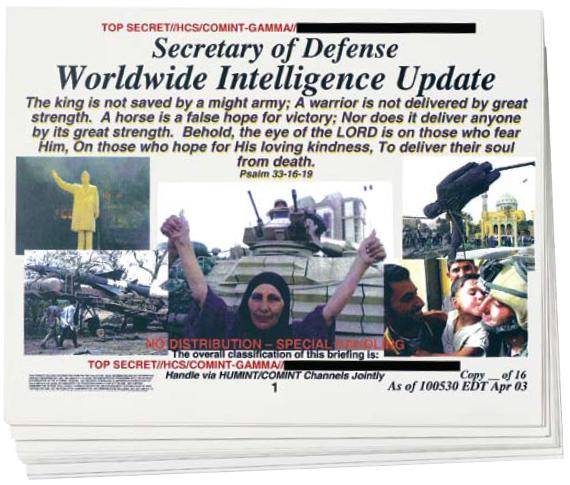 No doubt every diligent reporter still needs a notebook and a telephone, but to read David E Sanger’s report, “Biblical Quotes Said to Adorn Pentagon Reports,” you have to wonder whether the New York Times‘s chief Washington correspondent actually knows how to use the internet.

I know, he did manage to find his way to Robert Draper’s article on GQ, but after that Sanger seemed to think that his time would be better spent listening to a goofball like Lawrence Di Rita than to spend just a few minutes drilling the web to find out more about “a general who worked on the Joint Staff.”

Even though Draper gave prominence to “Major General Glen Shaffer, a director for intelligence serving both the Joint Chiefs of Staff and the secretary of defense,” who crafted the evangelical war reports on which Draper’s article focuses, Sanger didn’t seem to think it was worth mentioning the general by name. It was sufficient to cite Di Rita who “said that he had no recollection of the biblical briefs, but that he doubted the famously acerbic and sometimes cranky secretary would have tolerated them for long, much less shared them with Mr. Bush.”

Given that Maj Gen Shaffer retired on August 1 2003, his handiwork clearly wouldn’t have been gracing the secretary of defense’s desk for very long however well or poorly it was received.

Much more relevant to Sanger’s report would have been a little biographical information about the nameless general. For instance, the fact that he serves on the board of directors of an evangelical Christian school in Texas and is on the board of trustees of an evangelical program supplier that sells seminars to churches around the world “and in chapels of all branches of the U.S. military.”

At the same time, Shaffer is maintaining the time-honored tradition of cashing in on his Pentagon connections by working as executive vice president of Kforce Government Solutions (KGS) which “provides innovative solutions to federal government.”

While Shaffer might not have been inclined to discuss with a New York Times reporter how his evangelical orientation affected his work in the Pentagon, it’s reasonable to assume that the general’s public service experience provides the foundation for his private sector day-to-day work. On that basis, Shaffer could have been pressed a bit — but only if Sanger had managed to track down. The KGS contact page would have been an obvious place to start. Clearly, Sanger didn’t even get that far.