Forty senior clerics want election results annulled. The intense infighting among Iran’s clerical establishment appeared to play out in new dramatic fashion on Monday. Via reader Art, the news site Peiknet reported that Ayatollah Rafsanjani has a letter signed by 40 members of the powerful 86-member Assembly of Experts calling for the annulment of the recent presidential election results. [continued…] 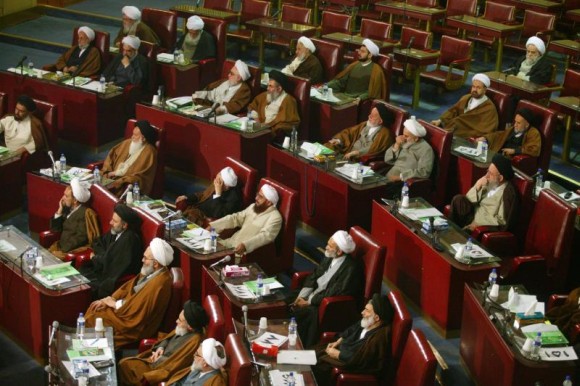 Members of the assembly [of experts] are reportedly considering forming a collective ruling body and scrapping the model of Ayatollah Khomeini as a way out of the civil crisis that has engulfed Tehran in a series of protests,

The discussions have taken place in a series of secret meetings convened in the holy city of Qom and included Jawad al-Shahristani, the supreme representative of Ayatollah Ali al-Sistani, who is the foremost Shiite leader in Iraq.

An option being considered is the resignation of Mahmoud Ahmadinejad as Iran’s president following condemnation by the United States and other European nations for violence and human rights violations against unarmed protestors. [continued…]

Hours after a warning from the powerful Revolutionary Guard not to return to the streets, about a thousand protesters defiantly gathered in central Tehran on Monday and were quickly dispersed in an overwhelming show of force by police who used clubs and tear gas.

The protesters, far fewer than the numbers who attended mass rallies last week, turned out despite the warning, on the Guards’ Web site, that they would face a “revolutionary confrontation” if they continued to challenge the results of the June 12 election and their country’s supreme leader, who has pronounced the ballot to be fair.

Even so, Iran’s most senior panel of election monitors, in the most sweeping acknowledgment that election was flawed, said Monday that the number of votes cast in 50 cities exceeded the actual number of voters, according to a state television report. [continued…]

Although [Mousavi] denounces the “lies and fraud” of the leadership, particularly in the recent election, he views the fraudulent election as only as the symptom of something far more serious. He describes a revolution gone wrong, a revolution that was originally based on attention to the voice of the people but has resulted in “forcing an unwanted government on the nation.”

This moment is “a turning point,” he says, and he defines the movement that is forming around him as having a “historical mission” to accomplish nothing less than “renewing the life of the nation” according to its own ideals.

He acknowledges, interestingly, that his own voice at the beginning was less “eloquent” than he would have wished and that the people were ahead of him in turning the movement green. But now he accepts the “burden of duty put on our shoulders by the destiny of generations and ages.” [continued…]

Theocracy and its discontents
By Fareed Zacharia, Newsweek, June , 2009

We are watching the fall of Islamic theocracy in Iran. I don’t mean by this that the Iranian regime is about to collapse. It may—I certainly hope it will—but repressive regimes can stick around for a long time. We are watching the failure of the ideology that lay at the basis of the Iranian government. The regime’s founder, Ayatollah Ruhollah Khomeini, laid out his special interpretation of political Islam in a series of lectures in 1970. In this interpretation of Shia Islam, Islamic jurists were presumed to have divinely ordained powers to rule as guardians of the society, supreme arbiters not only on matters of morality, but politics as well. When Khomeini established the Islamic Republic of Iran, this idea, velayat-e faqih, rule by the Supreme Jurist, was at its heart. Last week that ideology suffered a fatal blow.

When the current Supreme Leader, Ayatollah Ali Khamenei, declared the election of Mahmoud Ahmadinejad a “divine assessment,” he was using the key weapon of velayat-e faqih, divine sanction. Millions of Iranians didn’t buy it, convinced that their votes—one of the key secular rights allowed them under Iran’s religious system—had been stolen. Soon Khamenei was forced to accept the need for an inquiry into the election. The Guardian Council, Iran’s supreme constitutional body, promised to investigate, meet with the candidates and recount some votes. Khamenei has realized that the regime’s existence is at stake and has now hardened his position, but that cannot put things back together. It has become clear that in Iran today, legitimacy does not flow from divine authority but from popular will. For three decades, the Iranian regime has wielded its power through its religious standing, effectively excommunicating those who defied it. This no longer works—and the mullahs know it. For millions, perhaps the majority of Iranians, the regime has lost its legitimacy. [continued…]

Again and again over the past year, and against the advice of many of his own supporters, Khamenei has linked his own fate to Ahmadinejad’s. Last August, according to Rooz Online journalist Hossein Bastani, who is now living in France, the Supreme Leader met with Ahmadinejad’s cabinet and sang the praises of the president in no uncertain terms. Ahmadinejad, he said, did not apologize for Iran’s actions or go on the defensive; he took the offensive, and that made him better than his two immediate predecessors. About a month before the election, in a trip through the Kurdish areas of the country, Khamenei said flatly that he favored the kind of candidate who fights superpowers, lives simply and is fearless. He didn’t name Ahmadinejad, but he might as well have been reading talking points from his campaign. “From then on,” says a reformist politician who was close to Khamenei in the past, “the election was not about Ahmadinejad and Mousavi anymore. It was a referendum about the legitimacy of Mr. Khamenei’s rule. He brought on the situation we are in now.”

The treacherous crosscurrents inside the regime are fed by the pressure from the street but date back long before many of today’s protesters were born. An old photograph of Khamenei as a young seminarian shows a beardless youth in a turban who already wears thick glasses; behind them, the expression in his eyes is of a boy looking inward, lost in thought. A photograph of his fellow seminarian Ali Akbar Hashemi Rafsanjani from that same period in the 1950s suggests, beneath the white turban, a Type A personality who might, in an American context, be running for class president. Both of those young men committed themselves to making revolution as followers of Ayatollah Khomeini in Qum before his exile, and as activists inside the country—and often inside its jails—after Khomeini had been forced to leave. The relationships that took shape among the young mullahs then have continued to shape Iranian politics ever since Khomeini’s revolution triumphed in 1979. Through the bloody consolidation of power, and the eight-year war against Iraq, they shored up their positions, sometimes in competition, sometimes in support of each other. The aging Khomeini continued, truly, to be the Supreme Leader to whom all turned for approval. And he rewarded fealty. “The revolution will be alive as long as Mr. Hashemi [Rafsanjani] is alive,” said the Imam. And, “I’ve raised Mr. Khamenei myself.” [continued…]

For a century, Iranians have been political trailblazers in the 57-nation Islamic bloc. During the 1905-1911 Constitutional Revolution, a powerful coalition of intelligentsia, bazaar merchants and clergy forced the Qajar dynasty to accept a constitution and Iran’s first parliament. In 1953, the democratically elected National Front coalition of four parties led by Prime Minister Mohammed Mossadegh pushed constitutional democracy and forced the last Pahlavi shah to flee to Rome — until U.S. and British intelligence orchestrated a coup that put him back on the Peacock Throne. And in 1979, yet another coalition of bazaaris, clergy and intellectuals mobilized the streets to end dynastic rule that had prevailed for about 2,500 years.

So the angry energy unleashed this week from the northern Caspian coast to southern Shiraz is the natural sequel, spurred on by 21st century technology and the Internet. Each of the first three phases left indelible imprints on Iranian politics. The fourth will too.

The 1999 student protests failed because they involved only one sector of society; it was a body without a head or a strategy. But the current green-swathed uprising involves an emerging coalition that includes students and sanctions-strapped businessmen, taxi drivers and former presidents, civil servants and members of the national soccer team. [continued…]

Charles Krauthammer’s most recent column on Iran offers a concise distillation of neoconservative pathologies about the Middle East, and a demonstration of why the Iranian protesters’ self-proclaimed best friends in the U.S. may prove to be their worst enemies. In the course of excoriating Barack Obama for his alleged abandonment of the protesters, Krauthammer displays a deep indifference to the actual wishes and needs of the protesters that is extremely common among those pushing for more robust American interference in the Iranian crisis.

“The demonstrators,” Krauthammer informs us, “are fighting on their own, but they await just a word that America is on their side.” As it happens, Obama has offered many words of support for the protesters’ right to peaceful demonstration, but has stopped short of the full-throated denunciation of Khamenei and Ahmadinejad that Krauthammer evidently wants. Regardless, what is striking about Krauthammer’s assertion is that he does not deem it necessary to offer a shred of evidence to support it. He simply takes for granted, in the face of a fair amount of evidence to the contrary, that Iranians want a more aggressive U.S. intervention into the crisis. In this respect Krauthammer is representative of right-wing commentary on the Iran situation, which has been primarily concerned with striking the requisite “Churchillian” and “Reaganite” poses while displaying a remarkable disinterest in what actual Iranians might want or think. After all, why let the wishes of our intended beneficiaries get in the way of a fine opportunity for self-congratulatory moral posturing? [continued…]