Iran’s intifada: Symbols are not enough to win this battle
By Robert Fisk, The Independent, June 23, 2009 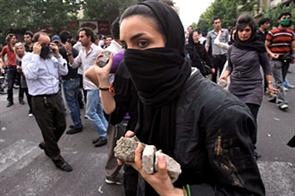 ou don’t overthrow Islamic revolutions with car headlights. And definitely not with candles. Peaceful protest might have served Gandhi well, but the Supreme Leader’s Iran is not going to worry about a few thousand demonstrators on the streets, even if they do cry “Allahu Akbar” from their rooftops every night.

This chorus to God emanated from the rooftops of Kandahar every night after the Soviet invasion of Afghanistan in 1979 – I heard it myself in Kandahar and I heard it last week over the rooftops of Tehran – but it no more stopped the Russians in their tracks than it is going to stop the Basiji or Revolutionary Guards. Symbols are not enough.

Yesterday, the Revolutionary Guards – as unelected as they are unrepresentative of today’s massed youth of Iran – uttered their disgraceful threat to deal with “rioters” in “a revolutionary way”.

Everyone in Iran, even those too young to remember the 1988 slaughter of the regime’s opponents – when tens of thousands were hanged like thrushes on mass gallows – knows what this means.

Unleashing a rabble of armed government forces on to the streets and claiming that all whom they shoot are “terrorists” is an almost copy-cat perfect version of the Israeli army’s public reaction to the Palestinian intifada. If stone-throwing demonstrators are shot dead, then it is their own fault, they are breaking the law and they are working for foreign powers. [continued…]

Editor’s Comment — Many of the equations Fisk is making here are off target. The basij may be as brutal as the IDF, yet as we have witnessed on several occasions, when their adversaries have been injured the demonstrators are willing to assist their fellow Iranians. Likewise, to point out that the Soviets were unmoved by the cries of “Allahu Akbar” from the rooftops of Kandahar does not imply that Khamenei and the Revolutionary Guard are similarly impervious to the calls from what for them — unlike the Soviets — are fellow Muslims.

Where Fisk is absolutely on target is to label this uprising an intifada — an awakening.

A Republican effort on Tuesday to cut off U.S. loans to some companies doing business with Iran will bring Congress deeper into the fray over the U.S. response to the Iranian elections.

The amendment to the draft fiscal 2010 State and foreign operations appropriations bill will give members their first chance to vote on binding Iran policy since that country’s presidential election June 12.

Rep. Mark Steven Kirk , R-Ill., said the amendment was aimed at Reliance Industries, a large energy company based in India that reportedly has provided Iran with as much as a third of its refined petroleum. He will offer the measure when the House Appropriations Committee takes up the draft bill on Tuesday…

Kirk worked Monday with Nita M. Lowey , D-N.Y., chairwoman of the State-Foreign Operations Appropriations Subcommittee, to draft language they both could support. Final details were unclear, but Kirk aims to block the U.S. Export-Import Bank from extending loan guarantees to companies that supply gasoline to Iran.

Although Iran is a large exporter of oil, it lacks refining capacity and must import as much as 40 percent of its gasoline, a situation those arguing for tougher sanctions have sought to exploit.

“As they’re shooting kids in Tehran, this is not the time to provide taxpayer funding for a facility helping [Iranian President Mahmoud] Ahmadinejad ease his gas shortage problem,” Kirk said.

The Export-Import Bank provides loan guarantees for companies overseas to buy U.S. goods and services. The bank has provided Reliance with two loan guarantees totaling $900 million, including a $500 million guarantee to build the world’s sixth-largest refinery in Jamnagar, India.

Kirk said the company’s role in providing a large share of Iran’s refined petroleum makes it a target. “We think it would be good for Reliance just to choose not to do business with Iran,” he said.

Opponents say the language would do little to block gasoline imports and would end up hurting both America’s image in Iran and U.S. companies that would be penalized by the measure. Bechtel Corp. and Dow Global Technologies are involved in the refinery’s construction.

“It struck me as a little strange that we’re going to hamstring American companies in the middle of the worst recession in decades,” said Patrick Disney, legislative director at the National Iranian American Council.

The funds for the Jamnagar project have already been disbursed, but if the amendment is retroactive it could apply to that and other past transactions and potentially undermine confidence in the Export-Import Bank, critics say.

The new refinery would not provide gasoline to Iran, according to the bank, but Kirk waved that issue aside. “I think nuances like that fall on deaf ears as the situation has come apart in Iran,” he said.

He offered another reason to back his plan: “Our amendment is a go because AIPAC supports it,” he said, referring to the American Israel Public Affairs Committee, a leading pro-Israel lobby. [continued…]

Editor’s Comment — The Jewish Telegraph Agency was quick to point out that “sanctions are even being endorsed by demonstrators in Iran.” How many such demonstrators there are is unclear. Interestingly, CNN succeeded in hooking up with one pro-Israel demonstrator in Tehran whose concern right now is that Iran’s nuclear program be halted. The only thing he didn’t say was, “Bring back the Shah.”

Looking past their fiery rhetoric and apparent determination to cling to power using all available means, Iran’s hardliners are not a confident bunch. While hardliners still believe they possess enough force to stifle popular protests, they are worried that they are losing a behind-the-scenes battle within Iran’s religious establishment.

A source familiar with the thinking of decision-makers in state agencies that have strong ties to Supreme Leader Ayatollah Ali Khamenei said there is a sense among hardliners that a shoe is about to drop. Ali Akbar Hashemi Rafsanjani — Iran’s savviest political operator and an arch-enemy of Ayatollah Khamenei’s — has kept out of the public spotlight since the rigged June 12 presidential election triggered the political crisis. The widespread belief is that Rafsanjani has been in the holy city of Qom, working to assemble a religious and political coalition to topple the supreme leader and President Mahmoud Ahmadinejad.

“There is great apprehension among people in the supreme leader’s [camp] about what Rafsanjani may pull,” said a source in Tehran who is familiar with hardliner thinking. “They [the supreme leader and his supporters] are much more concerned about Rafsanjani than the mass movement on the streets.”

Ayatollah Khamenei now has a very big image problem among influential Shi’a clergymen. Over the course of the political crisis, stretching back to the days leading up to the election, Rafsanjani has succeeded in knocking the supreme leader off his pedestal by revealing Ayatollah Khamenei to be a political partisan rather than an above-the-fray spiritual leader. In other words, the supreme leader has become a divider, not a uniter. [continued…]

President Obama condemned Iran’s aggressive response to the mass protests that have swept the country after its contested elections, saying that the United States and the international community “have been appalled and outraged” by the violence against peaceful demonstrators.

“I’ve made it clear that the United States respects the sovereignty of Iran,” he said. “But we must also bear witness to the courage and the dignity of the Iranian people, and we deplore the violence against innocent civilians anywhere that it takes place.”

He also said that comments by Iranian officials blaming the United States, Britain and other Western nations for inciting the protests were “patently false” and a “tired strategy to use other countries as scapegoats” that will not work. “Those who stand up for justice are always on the right side of history,” he said. [continued…]

Iran’s supreme leader’s second son, Mojtaba Khamenei, has emerged as one of the driving forces behind the ­government’s crackdown, diplomats and observers said .

Mojtaba is an ally of Mahmoud Ahmadinejad, the disputed president, and was credited with winning his father’s endorsement for the then Tehran mayor in the 2005 elections, leading to Ahmadinejad’s shock second round victory.

Mojtaba is an austere figure, ­generally seen as more hardline than his father and has become a gatekeeper for access to the beit-e-rahbari, the supreme leader’s home, and the supreme leader himself. [continued…]

They are known mockingly as the “Joojeh Basiji” — the “chicken Basiji.” These are the militia scarcely old enough to manage more than a feeble beard. Teenagers, brainwashed from early childhood, they have been ferried into the capital in large numbers, given a club and a shield and a helmet and told to go to work.

I saw them throughout downtown Tehran on Sunday, seated in the back of grey pick-ups. I saw them, sporting sleeveless camouflage vests, in clusters on corners, leaning on trees, even lolling shoeless on the grass in the central island of Revolution Square.

They were far from alone in a city in military lockdown. Elite riot police with thigh-length black leg guards, helmeted Revolutionary Guards in green uniforms and rifle-touting snipers composed a panoply of menace. The message to protesters was clear: Gather at your peril. [continued…]

Democracy, made in Iran
By Stephen Kinzer, The Guardian, June 22, 2009

Despite efforts by Iran’s leaders to keep photographers off the streets during post-election protests this month, many vivid images have emerged. The one posted here, above, is the one I found most chilling, poignant and evocative.

By now, many outsiders can identify the man whose picture is on the right-hand side of this protest sign. He is Mir Hossein Mousavi, the reported loser in this month’s presidential election. The elderly gentleman in the other picture is unfamiliar to most non-Iranians. He and his fate, however, lie at the historical root of the protests now shaking Iran.

The picture shows a pensive, sad-looking man with what one of his contemporaries called “droopy basset-hound eyes and high patrician forehead”. He does not look like a man whose fate would continue to influence the world decades after his death. But this was Muhammad Mossadeq, the most fervent advocate of democracy ever to emerge in his ancient land.

Above the twinned pictures of Mossadeq and Mousavi on this protest poster are the words “We won’t let history repeat itself.” Centuries of intervention, humiliation and subjugation at the hand of foreign powers have decisively shaped Iran’s collective psyche. The most famous victim of this intervention – and also the most vivid symbol of Iran’s long struggle for democracy – is Mossadeq. Whenever Iranians assert their desire to shape their own fate, his image appears. [continued…]

The first word came from abroad. An aunt in the United States called her Saturday in a panic. “Don’t go out into the streets, Golshad,” she told her. “They’re killing people.”

The relative proceeded to describe a video, airing on exile television channels that are jammed in Iran, in which a young woman is shown bleeding to death as her companion calls out, “Neda! Neda!”

A dark foreboding swept over Golshad, who asked that her real name not be published. She began calling the cellphone and home numbers of her friend Neda Agha-Soltan — who had gone to the chaotic demonstration with a group of friends — but Neda didn’t answer.

At midnight, as the city continued to smolder, Golshad drove to the Agha-Soltan residence in the Tehran Pars section in the eastern part of the capital.

As she heard the cries and wails and praising of God reverberating from the house, she crumpled, knowing that her worst fears were true. [continued…]