For over a week, major American news outlets have broadcast on a virtual loop the video of the killing of Neda Agha-Soltan, an unarmed 26-year-old Iranian woman, by Iranian security services. The poignant footage of Neda dying before a throng of grief-stricken bystanders crystallized the vulnerability experienced by the millions of demonstrators who have filled cities across Iran to confront authoritarian forces determined to suppress their voice through brutal means. When the mainstream American press chose to broadcast the graphic video — as moving as the footage is, it is difficult to watch — it made a commendable decision that nonetheless highlighted its hypocritical attitude towards Palestinians who resist Israeli occupation on a daily basis, and who often meet the same fate as Neda. [continued…] 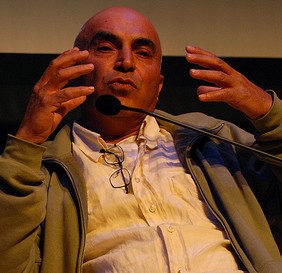 y name is Ezra Nawi. I am a Jewish citizen of Israel.

I will be sentenced on the first of July after being found guilty of assaulting two police officers in 2007 while struggling against the demolition of a Palestinian house in Um El Hir, located in the southern part of the West Bank.

Of course the policemen who accused me of assaulting them are lying. Indeed, lying has become common within the Israeli police force, military and among the Jewish settlers.

After close to 140,000 letters were sent to Israeli officials in support of my activities in the occupied West Bank, the Ministry of Justice responded that I “provoke local residents.”

This response reflects the culture of deceit that has taken over all official discourse relating to the Occupied Palestinian Territories.

After all, was I the one who poisoned and destroyed Palestinian water wells?

Was I the one who beat young Palestinian children?

Did I hit the elderly?

Did I poison the Palestinian residents’ sheep?

Did I demolish homes and destroy tractors?

Did I block roads and restrict movement?

Was I the one who prevented people from connecting their homes to running water and electricity?

Did I forbid Palestinians from building homes? [continued…]

The settlers defying Obama
By Seth Freedman, The Guardian, June 29, 2009

At first glance, the dusty dunes of the South Hebron hills appear splendidly frozen in time. Small encampments of nomadic farmers are dotted across the landscape, sparse groves of olive and fruit trees surrounding the ramshackle tents huddled together in their midst. Flocks of sheep and goats graze on the scrubby foliage under the watchful eye of teenaged shepherds; the silence of the plains is breathtaking, the only noise an occasional cautionary bark from the villagers’ ever-vigilant guard dogs.

But the glorious isolation in which the rural communities seem to dwell is an illusory facade. A closer look at the way their camps are arranged reveals the true picture of modern life on the land they’ve tended for generations. Soldiers stand guard in pairs at strategic spots on the hillside, enforcing the no-entry zones surrounding the rash of settlements spread across the region, the mini-towns growing bigger by the month, swallowing up more and more of the Palestinians’ land in the zero-sum game eternally stacked in the settlers’ favour. [continued…]

The debate over Israeli settlements in the occupied Palestinian territories is often framed in terms of whether they should be “frozen” or allowed to grow “naturally.” But that is akin to asking whether a thief should be allowed merely to keep his ill-gotten gains or steal some more. It misses the most fundamental point: Under international law, all settlements on occupied territory are unlawful. And there is only one remedy: Israel should dismantle them, relocate the settlers within its recognized 1967 borders and compensate Palestinians for the losses the settlements have caused.

Removing the settlements is mandated by the laws of the Geneva Convention, which state that military occupations are to be a temporary state of affairs and prohibit occupying powers from moving their populations into conquered territory. The intent is to foreclose an occupying power from later citing its population as “facts on the ground” to claim the territory, something Israel has done in East Jerusalem and appears to want to do with much of the West Bank. [continued…]

Israel said Monday it authorized the construction of 50 new residential units in a West Bank settlement, defying rising pressure from the U.S. and the international community for a building freeze in territory claimed by the Palestinians as part of a future state.

The expansion of Adam, a settlement near Jerusalem surrounded by three Palestinian villages, is part of a defense ministry plan to relocate 300 residents of the unauthorized hilltop outpost of Migron. [continued…]

Four decades ago, when police and national guardsmen attacked protestors at the Democratic National Convention in Chicago, the protesters shouted, “The whole world is watching.”

However arresting those images were, they could not possibly compare to the flood in recent weeks of YouTube videos, Flickr photos, Twitter tweets, Facebook pages, and blogs dedicated to events in Iran. Today, the world is not only watching — in an important way it is participating, as observers dig down for their own raw footage, reporting, and analysis pouring out of Iran.

It is easy to be swept up by all of these images coming out of Iran and think that the days of dictatorship — in Iran and the rest of the world — are numbered. Overnight, normally innocuous social networking tools swiftly turned political, and local events found international audiences mere instants after they occur.

That prompted Verizon’s CEO, Ivan Seidenberg, to exult on the Charlie Rose Show this week that Iran’s efforts to manage public sentiments via restricting Internet access was a losing proposition. “The power of the people will override that without any question,” he said. “And it’ll happen sooner than they think, because the technology is just too pervasive.”

If only that were true. The way the outside world sees Iranian protests is markedly different from the way Iranians themselves do, and the government is increasingly asserting its authority over the information space in the country. While many in the West see a potential revolution in Technicolor, the green banners of opposition activists from the election campaign are quickly fading to black. [continued…]

The stark contrast between the street demonstrations in Iran in the past two weeks and the absence of any such popular revolts in the Arab world during the past half-century is more than just fascinating in terms of political anthropology. A major question that hangs over the Arab world like a ton of bricks is: Why do the top-heavy, non-democratic political control and governance systems of the Arab world persist without any significant popular opposition or public challenge?

The events in Iran — the second major popular rebellion in the past 30 years — accentuate the relative quiescence in the Arab world, but this is not for lack of grievances among Arabs. The same pressures and indignities that annoy many Iranians and push them to openly challenge their rulers are prevalent throughout much of the Arab world: [continued…]