Iran at the crossroads of history: will this regime fall like the Shah’s?
By Abolhassan Bani-Sadr, Huffington Post, July 31, 2009 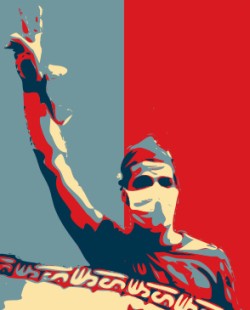 istorically speaking, the Iranian government has enjoyed four sources of legitimacy: its ability to manage state affairs (and thus the people’s consent), its official religious authority, its commitment to Iran’s independence, and a stable base of social support. All of these have now been irretrievably undone.

The massive vote rigging on June 12 brought President Mahmoud Ahmadinejad’s ability to run the state’s affairs under intense public scrutiny, and the spontaneous uprising of the people in its wake openly removed the government’s political legitimacy.

Shortly after, in his speech at Friday prayer, Ayatollah Ali Khamenei, the supreme leader, declared war on the people, threatening a violent crackdown unless the results of the election were duly accepted. This removed the last vestiges of the regime’s religious legitimacy as well.

It had been waning for some time already, not only because it stands in opposition to Islam understood as a discourse of freedom, but even within the regime and among traditionalists. Ayatollah Ali Sistani (the greatest Shia clergyman in Iraq) was opposed to the principle of Velayat-e Faqih (the rule of the imamate), and Ayatollah Hossein Ali Montazeri (Khomeini’s would-be successor who later became his critic) had argued that the doctrine was simply a proof of shirk, or false God-making. [continued…]

Consider Iran’s divisions when weighing its indecision
By Tony Karon, The National, August 1, 2009

The Obama Administration has begun to signal that if Iran hasn’t responded positively to its offer of negotiations over the nuclear question by mid September when the UN General Assembly convenes, Washington will move to implement what Secretary of State Hillary Clinton calls “crippling action” against Iran. They’re unlikely to get Chinese and Russian assent for further UN Security Council sanctions, but the US is moving towards using its commercial and financial muscle to force third-country corporations to cut ties with Iran that enable it to trade internationally. The prime goal of these US sanctions is choking off the gasoline imports on which the Iranian economy depends because of its own limited refining capacity. Companies in Europe, India and elsewhere that enable this trade will be targeted for sanctions unless they cut off gasoline supplies to Iran. At the same time, the US is signalling that it’s urging the Israelis to wait for diplomacy to play out before they launch military strikes, subtly flicking if not quite rattling a sabre.

Yet, there’s a consensus across the political spectrum that Iran is simply not in a position to engage in nuclear talks right now, given the turmoil within the regime. And Washington’s own opening demands are still stuck in the Bush era, insisting that Iran forego the right to enrich uranium – a position rejected by all the factions in Iran. It’s not hard to see, though, that if this autumn Iran suddenly finds itself facing gasoline sanctions and sabre rattling from Israel, behind demands that it surrender what it sees as its nuclear rights, many of those who are currently challenging Mr Ahmadinejad and Mr Khamenei will change their stance if they perceive the Islamic Republic under external threat. The “crippling action” Mrs Clinton now threatens may finally achieve what Mr Ahmadinejad and Mr Khamenei have thus far failed to do – persuade the key factions of the opposition to close ranks behind the regime. [continued…]

Iranian authorities accused several politicians, including former Vice President Mohammad Ali Abtahi, of planning the riots before the elections and sparking them by allegations of vote fraud.

” ‘Cheating’ was the code word for the riot in which people were mobilized to take to the streets,” the Fars news agency quoted Abtahi as saying.

“Of course, I was not in favor of Ahmadinejad’s presidency. I did not accept this election, and by that non-acceptance I prevented the growth of civil society and I betrayed Iranian culture and history,” Abtahi said, according to Fars. 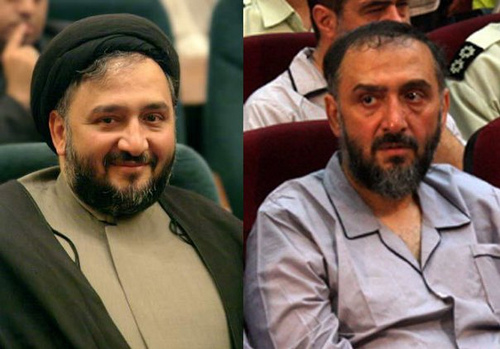 The normally jovial cleric appeared gaunt and withdrawn as he sat in the courtroom. A photograph showed Abtahi reading the confession from a handwritten document. Reformist news websites quoted his wife as saying he had been drugged. His daughter told BBC Persian that his lawyer had been barred from the proceedings. [continued…]

Iran’s former President Mohammad Khatami vehemently condemned a series of confessions extracted from his political allies and broadcast on state television as part of what he described as a “show trial.”

In comments published today on his website, Khatami, onetime leader of the nation’s reformist movement, warned that the confessions aired during Saturday’s mass trial for those allegedly behind Iran’s weeks of unrest would backfire by further dividing the people from the establishment. [continued…]

President Mahmoud Ahmadinejad of Iran, under attack from a defiant protest movement that rejects his re-election as fraudulent and from a rising chorus of critics within his own hard-line camp, defended himself on Friday and denied reports that he had fallen out of favor with the country’s supreme leader.

Conservatives have accused Mr. Ahmadinejad of showing insufficient respect for the leader, Ayatollah Ali Khamenei, during a recent dispute over cabinet choices. Some have even hinted that the combative president, who is scheduled to be sworn in for a second term next week, may not last if he does not change his ways. [continued…]

Mullahs and generals
By Hossein Askari, The National Interest, July 31, 2009

Will the turmoil in Iran continue? Can Ayatollah Khamenei survive? Can the regime continue to call itself “Islamic”? Now that the supreme leader has shed his religious mantle and has trashed the constitution, the options are far narrower than you might think.

To gauge Iran’s future, it is essential to emphasize the obvious—the “Islamic” Republic of Iran was built on velayat-e-faqih, Ayatollah Khomeini’s concept of clerical oversight, which was intended to reverse Iran’s drift toward secularism under the shah.

Khomeini understood that for his imprint to be accepted, it would have to show respect for centuries of Iranian history and civilization and for the traditional Shiism practiced in Iran. This meant just rule, social and economic justice, the freedom to chose rulers, the obligation to fight oppression and the glorification of martyrdom among others—something that the shah had ignored to his own peril. Khomeini knew full well, from his own experience under the shah, that Iran, unlike other countries in the region, could not be governed by force for long. As such, Khomeini adopted a religious mantle and a new constitution to bolster his legitimacy. It looks like that same mantle has now become a noose around his successor’s neck. [continued…]