In a week where security in Afghanistan seems headed anywhere but up (rocket strikes on Kabul, a Taliban frontal assault in Logar province today), the question on many a commentator’s lips has been: where is this all going?

Some of the strongest analysis on stabilizing Afghanistan recently has come from Andrew Exum who just took a break from his position at the Center for New American Security to act as some-time advisor to General McChrystal. I was struck by a comment he made in an interview on the World Politics Review:

“The fall of Kandahar is not going to look like the Taliban rolling down the streets in tanks. The fall of Kandahar is going to look like the Taliban steadily making ground with a campaign of fear and intimidation, and creating an environment in which the Afghan government can’t operate in Kandahar, and Kandahar eventually becomes ideologically inhospitable to the government of Afghanistan, never mind Coalition forces.”

I think Ex is dead on. But by that standard, I have to question: Has Kandahar already fallen? [continued…] 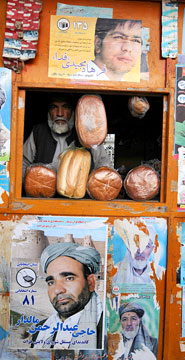 upporters of President Karzai are preparing to rig voting in next week’s presidential elections in unstable parts of Afghanistan’s south as Taleban violence threatens to intimidate voters and hit turnout in his traditional support base.

The Times has talked to several witnesses whose reports will bolster suspicions within the international community that there will be electoral fraud across the south, some of it allegedly orchestrated by Mr Karzai’s half-brother, Ahmed Wali Karzai.

Such irregularities could threaten the credibility of the election process and have led to threats of violent demonstrations in the north if Mr Karzai is thought to have stolen the vote.

One tribal elder in the Marja district of Helmand alleged that the vote rigging was being organised by members of Mr Karzai’s family and local tribal allies, particularly Sher Mohammad Akhundzada, the former governor of the province. [continued…]

The United States will not meet its goals in Afghanistan without a major increase in planned spending on development and civilian reconstruction next year, the U.S. ambassador in Kabul has told the State Department.

In a cable sent to Secretary of State Hillary Rodham Clinton, Ambassador Karl W. Eikenberry said an additional $2.5 billion in nonmilitary spending will be needed for 2010, about 60 percent more than the amount President Obama has requested from Congress. The increase is needed “if we are to show progress in the next 14 months,” Eikenberry wrote in the cable, according to sources who have seen it.

Obama has asked for $68 billion in Defense Department spending in Afghanistan next year, an amount that for the first time would exceed U.S. military expenditures in Iraq. Spending on civilian governance and development programs has doubled under the Obama administration, to $200 million a month — equal to the monthly rate in Iraq during the zenith of spending on nonmilitary projects there. [continued…]

Almost daily, girls’ schools are burned and bombed and teachers, principals, students and their families receive what are known as “night letters,” Islamic decrees of death issued by the Taliban and pasted on homes and the walls of villages in the dead of night.

In just two years, more than 640 schools in Afghanistan and more than 350 in Pakistan have been bombed, burned or shut down, according to the education ministries in both countries. Eighty percent of those targeted were girls’ schools.

In the Helmand Province in the south of Afghanistan, where the Taliban is effectively in control of most of the province, 75 of the 228 schools have been shut down by Taliban militias that disapprove of the secular teaching and the idea of girls receiving an education. [continued…]

So first we expanded our forces in Afghanistan. Then we took on the challenge of prison reform there (ignoring the fact that America’s own prison system is a national disgrace). And yesterday we learned that U.S. armed forces are putting suspected Afghan drug dealers on a “kill or capture” list. In other words, we are now extending the “war on drugs” to Afghanistan, ignoring the fact that this “war” (first announced by Richard Nixon four decades ago) hasn’t led to victory. The new strategy also ignores some of the obvious lessons of that “war,” and places the United States on some pretty dubious moral ground. [continued…]