Officials see rise in militia groups across US
By Eileen Sullivan, AP, August 12, 2009 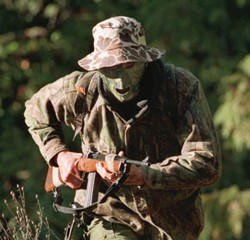 ilitia groups with gripes against the government are regrouping across the country and could grow rapidly, according to an organization that tracks such trends.

The stress of a poor economy and a liberal administration led by a black president are among the causes for the recent rise, the report from the Southern Poverty Law Center says. Conspiracy theories about a secret Mexican plan to reclaim the Southwest are also growing amid the public debate about illegal immigration.

Bart McEntire, a special agent with the Bureau of Alcohol, Tobacco, Firearms and Explosives, told SPLC researchers that this is the most growth he’s seen in more than a decade.

“All it’s lacking is a spark,” McEntire said in the report. [continued…]

The 1990s saw the rise and fall of the virulently antigovernment “Patriot” movement, made up of paramilitary militias, tax defiers and so-called “sovereign citizens.” Sparked by a combination of anger at the federal government and the deaths of political dissenters at Ruby Ridge, Idaho, and Waco, Texas, the movement took off in the middle of the decade and continued to grow even after 168 people were left dead by the 1995 bombing of Oklahoma City’s federal building — an attack, the deadliest ever by domestic U.S. terrorists, carried out by men steeped in the rhetoric and conspiracy theories of the militias. In the years that followed, a truly remarkable number of criminal plots came out of the movement. But by early this century, the Patriots had largely faded, weakened by systematic prosecutions, aversion to growing violence, and a new, highly conservative president.

They’re back. Almost a decade after largely disappearing from public view, right-wing militias, ideologically driven tax defiers and sovereign citizens are appearing in large numbers around the country. “Paper terrorism” — the use of property liens and citizens’ “courts” to harass enemies — is on the rise. And once-popular militia conspiracy theories are making the rounds again, this time accompanied by nativist theories about secret Mexican plans to “reconquer” the American Southwest. One law enforcement agency has found 50 new militia training groups — one of them made up of present and former police officers and soldiers. Authorities around the country are reporting a worrying uptick in Patriot activities and propaganda. “This is the most significant growth we’ve seen in 10 to 12 years,” says one. “All it’s lacking is a spark. I think it’s only a matter of time before you see threats and violence.” [continued…]