Rabbis fight flu pandemic on a wing and a prayer
Reuters, August 11, 2009 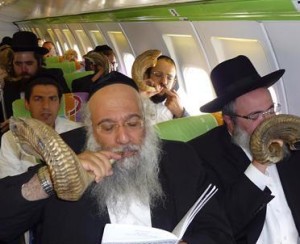 ozens of rabbis and Kabbalah mystics armed with ceremonial trumpets have taken to the skies over Israel to battle the H1N1 flu virus, Israeli media said on Tuesday.

About 50 Jewish holy men chanted prayers and blew ritual rams’ horns known as shofars in an aircraft circling over the country in the hope of stopping the spread of the virus, some of those involved in Monday’s venture were quoted as saying.

“The aim of the flight was to stop the pandemic so people will stop dying from it,” rabbi Yitzhak Batzri told the Yedioth Ahronoth newspaper, which carried a picture of the bearded men praying while airborne.

“We are certain that, thanks to the prayer, the danger is already behind us,” added Batzri, who could not be reached for further comment on Tuesday. [continued…]