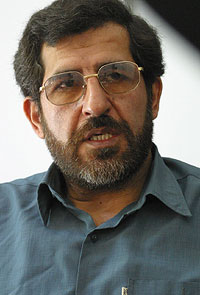 hat do you do when your imprisoned friends and political allies admit to plotting against the Islamic Republic of Iran in an elaborate and suspiciously scripted series of televised confessions?

What if you’re worried you’re next?

You could skip town or keep quiet. Or, if you are prominent opposition activist Mohsen Armin, you can try and beat the authorities at their own game by issuing a retraction of any future televised confession in anticipation of your own arrest and possible torture.

Armin, a member of Islamic Revolution Combatants Organization, or the IRCO, posted the renunciation on his website under the glib headline “I look forward to being detained.” [continued…]

One of Iran’s defeated opposition presidential candidates has said some protesters held after July’s disputed poll were tortured to death in prison.

The claim by Mehdi Karroubi comes days after he said a number of prisoners, both male and female, had been raped.

Officials deny the rape claims, but admit that abuses have taken place. [continued…]

Iranian opposition figures living abroad have long insisted that the majority of those living in the country were opposed to the Islamic Republic. They’ve found an unlikely ally in a top aide to President Mahmoud Ahmadinejad, Esfandiar Rahim Mashaei, who made some curious statements to supporters.

“The remaining 20 million [who voted for Ahmadinejad] were in fact critical of the regime and they are more serious than the 13 million” who voted for Mousavi, the weekly quoted Mashaei as saying in its Sunday edition, according to an account on the news website Ayanadenews.com.

“These 13 million voters only questioned the four-year performance of Ahmadinejad,” he continued. “But the 20 million were critical of all the years before Ahmadinejad took office.”
His comment suggests that Mashaei believes the vast majority of those who voted for Ahmadinejad rejected the performance of the government from 1981 to 1989, when Iran’s supreme leader, Ayatollah Ali Khamenei, was president, as well as the subsequent 16 years, when Khamenei gave his blessing to the presidencies of Ayatollah Ali Akbar Hashemi Rafsanjani and Mohammad Khatami. [continued…]